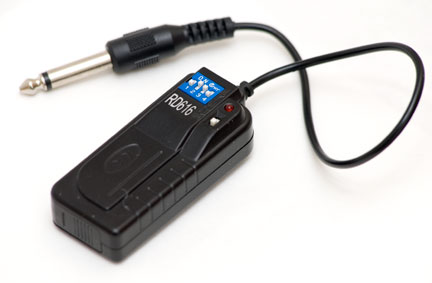 There are countless ways for photographers to waste their money. Bits of cloth and plastic that you’d expect to pick up for pocket change at most stores seem to cost at least $20 in a photography shop. $20 for a roll of tape. $20 for a plastic cup. I recently paid $8 for a 6″ long PC cord at Glazers, a photography store in Seattle that really excels in this arena. So its not surprising that so many of us try to find ways to cut costs by making our own equipment (see Strobist.com for excellent examples) or buying less expensive but equally functional brands (Sigma, Tokina, Tamron…).

Unfortunately, this sometimes leaves us stuck with a bunch of junk.

On that note, let us consider radio triggers. As anyone who has used them will attest, Pocket Wizards are awesome: reliable, sturdy, and long-ranged, but expensive. Depending on the model, they may cost anywhere from $300 (for a multi-max) to nearly $600 per pair, the minimum required for use with a single flash.

And that is what led me to spend about $25 each on a couple of sets of radio triggers from an Ebay store. You’ll find the same basic product sold in dozens of online shops based out of Hong Kong and China. There are a couple of different models, some with a hot shoe, some for monolights, and some general purpose, and each model is sold under numerous brand names and designations. Regardless of what they’re being called, though, if you take a look at the photos, you’ll find that they’re generally the same pieces of equipment with different brands and numbers stamped on them. (Actually, the Visico VS-604 receiver appears to be styled a little differently than similar products available at the moment. Let me mention here that I’ve purchased some other “Visico” brand products, and was very happy with them, so don’t take this review to be a blanket statement about the brand name).

The first, the Visico VS-604, is the more consistently designated: both the transmitter and receiver share the same model name. The transmitter is a hot-shoe mount unit that has a nice sleek, low profile, a test button and indicator LED on top, and 2 dip switches on the bottom which determine which one of its 4 channels it will transmit on. It’s powered by its own battery (some type of small photo battery) that can supposedly be replaced by removing a screw and pulling the unit in half. I haven’t tried it yet. There’s also an 1/8″ jack on the side of the unit, presumably to add wired trigger functionality, which could be handy if your camera didn’t have a sync jack. 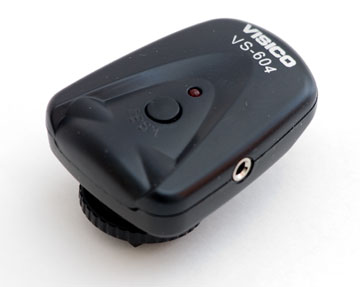 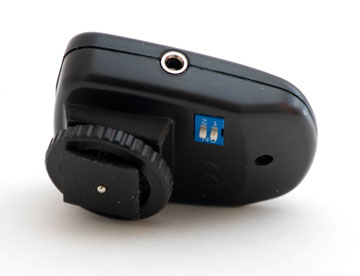 The receiver is intended for use on a monolight; it accepts the female end of a monolight’s power cord on one side of the unit, and the other has its own AC-out plug to fit into the monolight. The receiver also has a 1/4″ plug to trigger the monolight, and two LEDS: a green to indicate that it’s powered on, and a red to echo the trigger signal. 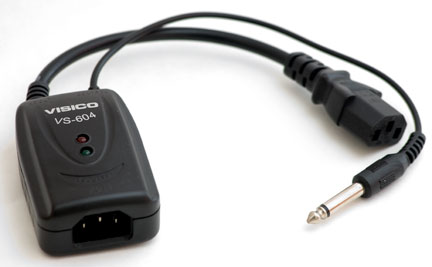 This AC powered receiver is actually a great idea if you’re only using it on studio monolights. There’s no need to charge batteries, and as long as the monolight is getting power, the trigger has power as well. The obvious downside, of course, is that it’s useless if you want to use it to trigger any other type of flash, such as a battery-pack powered strobe unit or an off-camera Speedlight.

The second radio trigger set is much more common on the internet. It was sold to me under the designation “TR-04” , but the transmitter is labeled “RF-616” and the receiver “RD-616”. There is no apparent brand name, but they’re sold through Link Delight, GreenLife, Mr Studio One, U Color, and numerous other Ebay stores in Hong Kong and China, and some (usually more expensive) shops in the USA.

The transmitter is exactly the same as the VS-604, except that it has 4 dip switches to switch between 16 channels. The receiver is powered by 2 AAA batteries which are replaceable via a slide-off compartment door. It shares the same 4 switch channel selector as the transmitter, and a 1/4″ plug which will fit most monolights. It also has a male PC jack on the back which can be used to trigger my Nikon speedlights (along with that male-male PC cord) or any other flash that you can adapt to it (assuming that its the correct triggering voltage, which is roughly 5V). It also has a power switch to reduce battery drain, although I’ve forgotten mine in the “On” position for days and it doesn’t seem to be a problem.

I got these triggers for use with studio flashes in a small studio, and that was how I initially tested them. Either transmitter will trigger both triggers, so I tested both of them regularly over the course of a couple of months. Working within about 10 feet (3 meters) from each receiver, mostly working on table-tops shooting small objects, the tiggers worked as expected. The flashes were triggered over 95% of the time, and in some of the cases in which they weren’t it may have been the result of insufficient recyle time.

One quirk that I noticed immediately was that the foot of the RF-616 wasn’t exactly the right size for my hot shoe. The base was just slightly too wide, making it difficult to seat properly. It is, however, just plastic… so after a couple of swipes with a file, it was just fine.

More problematic, though, was the sync speed. I tested the units on a Nikon D80, which has a max sync speed of 1/200th of a second. No matter which transmitter or receiver I used, though, I could not realiably get a sync speed above 1/90th sec. At 1/125th, somewhere between 50 and 75% of my shots were fully lit. At first, I thought that it might be the electronics in the monolights I was using, but I later switched to a speedlight and had the same problem, so I’m convinced that it was the radio triggers. In the studio, this isn’t a big deal… there’s not much need to have a high sync speed anyway. On location, though, especially with portraits including pets or children, when control over background light is more important, this can be a serious issue.

When I decided to give the triggers a try outside of the studio, I discovered their real limitations. As I already mentioned, I had sync speed problems. More importantly, though, was the working distance from the camera to the trigger. According to the manufacturers specifications, they should work for 50 meters (164 feet), as long as there are no obstructions. Since I was planning on triggering some strobes at a wedding, I decided to test them at a working distance of about 30 feet (10 meters).

At 20 feet, I could get a flash about every 10th trigger if I tilted the camera just right. At 15 feet, it worked about half of the time. Very disappointing, I thought. My first inclination was to switch transmitters; perhaps the first one had a low battery. I took a transmitter in each hand and started walking away from my light stand with the RD616 receiver (with fresh batteries). The performance from each transmitter was roughly equivalent; beyond about 10 feet, they were very un-reliable. If I held the triggers behind my back, they were not reliable at more than 4 feet.

Is it possible that BOTH transmitters had similarly drained batteries? Yes, I suppose… but unlikely. It seems even more unlikely that batteries drained to such an extent would cut the range by more than 90% but that they would still work reliably (for months) at 10 feet.

Despite their (lack of) long range performance, these triggers were a good deal for their price. I’ve seen them listed for as low as $15 on Ebay, including shipping, which is even less than I paid, and it really beats shooting with a PC cord hanging from your camera. If you plan to do a lot of shooting in a small studio, then I recommend them.

However, they are NO SUBSTITUTE for a Pocket Wizard. I’m sure that there are other triggering systems that are, although I haven’t tested them myself, so I can’t recommend one. If you need greater range (weddings, sports, journalism, etc) and reliability, these simply will not fill your needs.