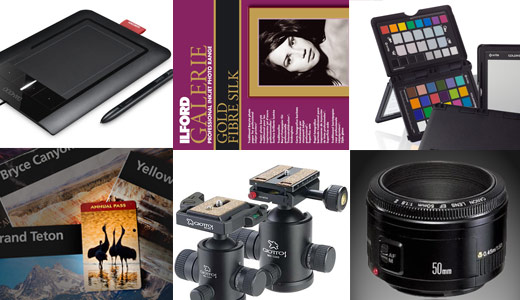 Christmas Gift Ideas for the Photographer : 2010

Some of you may think that I’m jumping the gun a bit. It is, after all, only the first week of November… and usually this sort of thing doesn’t start to appear until after Thanksgiving.  As it turns out, though, my birthday is right around Thanksgiving, so I’m starting my wish-lists early.

Usually when these types of lists appear in our favorite photography magazines, they contain a bunch of the latest new gizmos from the magazine’s advertisers (useful or not), plus a bunch of stuff that nobody could actually afford to give as a gift (“The Leica S2 is the perfect gift for the photographer on your list this year… etc.”). But I don’t have any particular advertisers, and I like there to be some chance of actually getting the stuff on my list… so I’ve put together this list based on actual presents that I’ve received in the past and have turned out to be wonderfully useful, and things that I’d really like to receive this year. I’ve tried to keep the list focused on items that cost less than $100, or maybe two. If you’re planning on spending much more than that, I hope that you have a better source than me!

For The Flash Photographer

If all else fails, or if you just can’t make up your mind and don’t want to risk a present that wouldn’t be appreciated, there’s always the gift card. As a photographer, my two favorites are:

I’m biased there, though, since they’re also my advertisers, but I did choose them to work with for a good reason. :)

Please help me ADD to the list! If you have a good idea that isn’t on this list already, and is moderately priced, leave a comment and let me know!