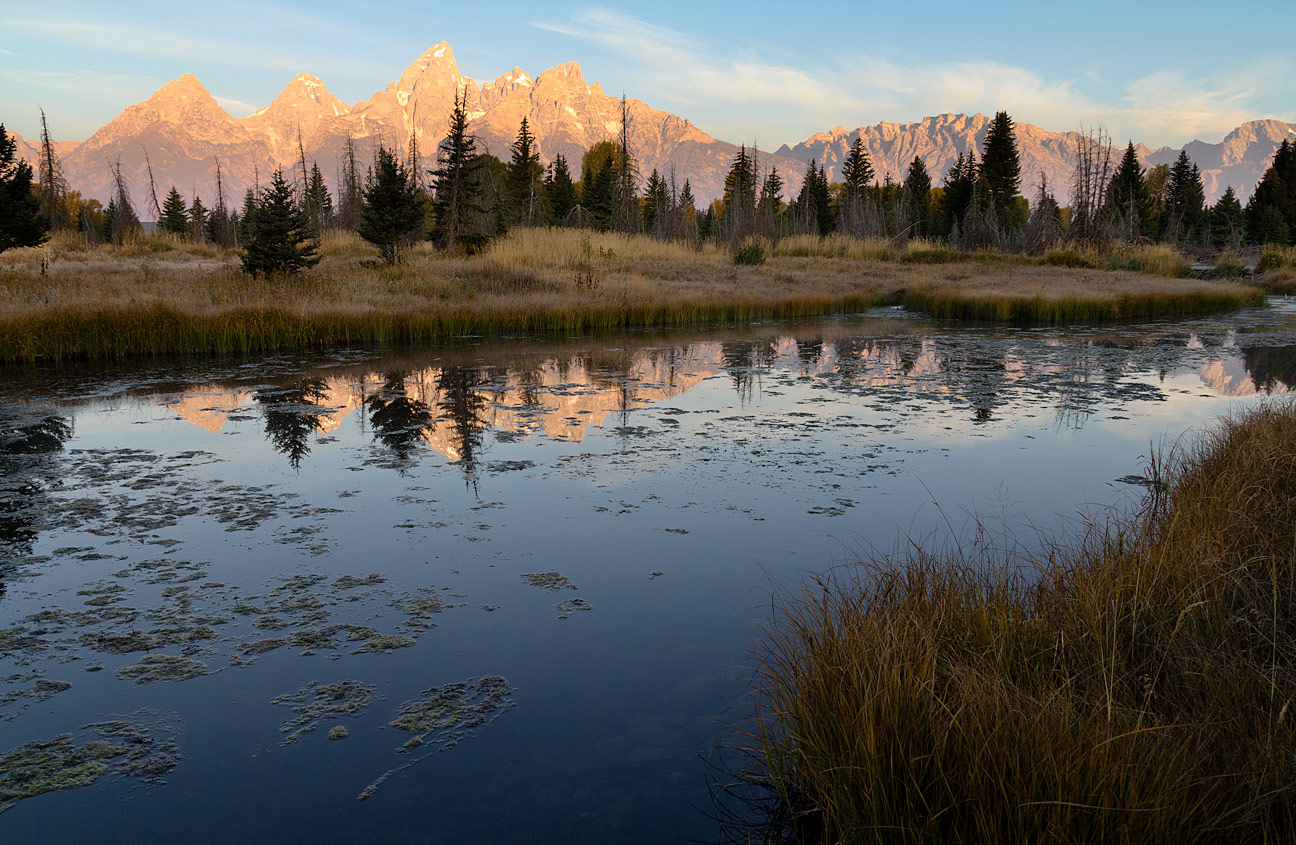 Grand Teton and Yellowstone: A Week for Learning

On September 26th, I found myself driving north through the scrubby hills of western Wyoming on Highway 191 towards Grand Teton National Park, with six middle and high school students as passengers. The rear of the van was boiling with giggles, snippets of songs,  and shouted guesses at riddles. There was a unique smell. We were fourth in a caravan of five:  four similarly loaded vehicles, and a truck full of gear behind me. Nineteen of the twenty-two students were girls.

I’ll admit that this sort of thing is not usually my cup of tea. When I’m out photographing I prefer to work alone, keeping focused on the light and my subject. When I was presented with this opportunity, though, it sounded like fun: a week-long camping trip in two gorgeous national parks, helping teenagers (from a Colorado expeditionary-learning school) hone their photography skills. It had been several years since I’d done any teaching, and then it had been college classes. Working with younger students would be a new experience. 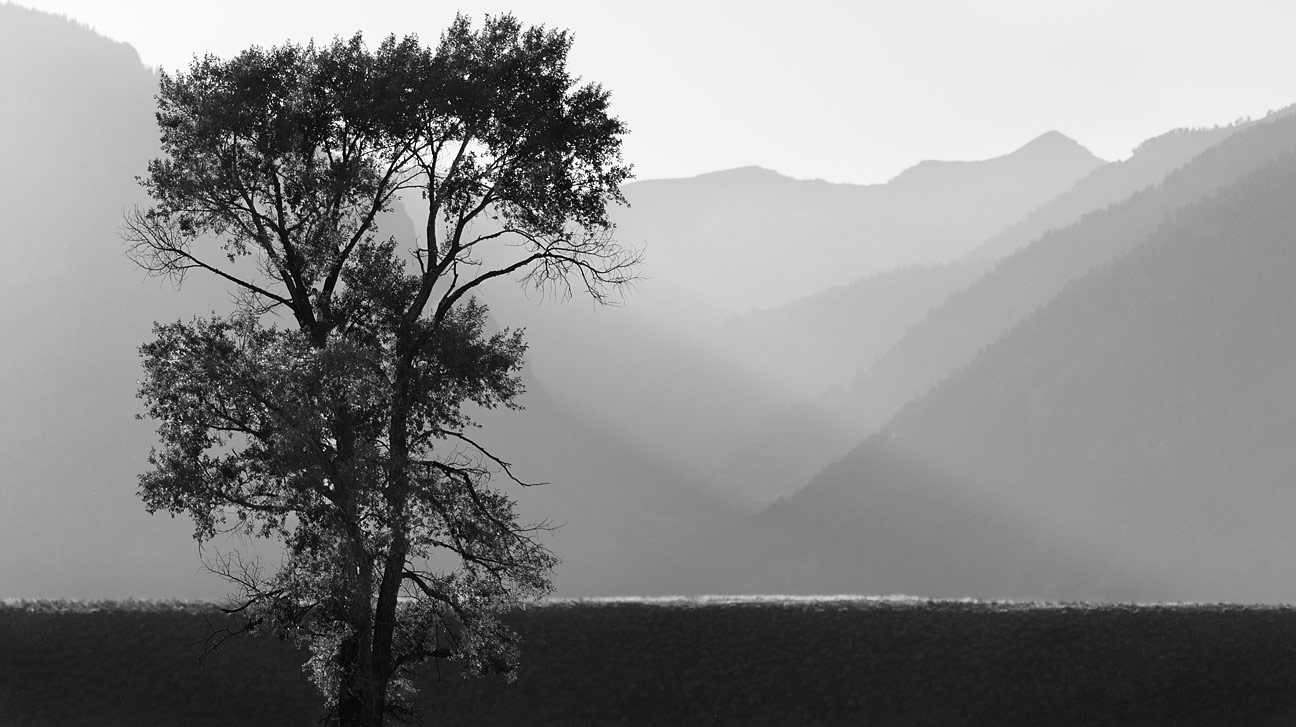 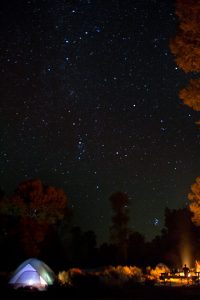 And so I ended up pulling into the Gros Ventre Campground, just before sunset. We quickly pitched tents and started preparing dinner, and I found my tripod and got off a few shots before the sun disappeared behind the mountains. I was expecting the temperatures to drop below freezing over night, so I only shot a few pictures of camp before I bundled up in my tent and went to sleep.

Our first true photography expedition started early the next morning. We woke at 6:00, loaded into the vans, and headed to Lower Schwabacher Landing, hoping to arrive at our destination before the first rays of morning sun appeared on the peaks of the Tetons. As is so often the case with groups this size, though, it took us longer than expected to get underway… and when we arrived, not only were the mountains mostly lit, there were perhaps twenty photographers already stationed along the river to capture it. Luckily, there were beautiful locations all long the river, and we quickly spread out and started shooting. In the afternoon, we visited Mormon Row, Jackson, and a few pretty areas in between.

The following morning, we broke down our camp and started getting prepared to head towards Yellowstone. As the tents came down, someone noticed a moose plodding across the field, heading directly towards our camp… a large male with an impressive rack of antlers. Moments later, we spotted a female trailing behind. I grabbed my camera, but the pre-dawn light was disappointing. I fired off numerous shots as the moose walked past our camp, no more than 30 feet away, but even at ISO 1600 @ f/2.8 on my  70-200 lens, I couldn’t get shutterspeeds fast enough to get perfectly sharp shots. Before leaving camp, I stopped to shoot a panorama as the sun rose.

On our way through Grand Teton,  we stopped along the Snake River at Oxbow Bend, where the autumn colors were out in full force. I had stopped in at the same location the previous year, and the colors were beautiful, but the mountains were obscured by clouds. This time, there was a little haze in the sky, but the mountains were still beautifully reflected in the river.

I spent the remainder of the afternoon as more of a tourist than a photographer as I led a small group of students past Old Faithful and along the upper boardwalk to Morning Glory Pool. Yellowstone is always beautiful, no matter what time of year it is, but not all of it is photogenic.

We set up camp just outside of the park in Montana, but after dinner, several of us passed through the gates again to watch for wildlife along the Madison River. We were not disappointed. In the flats along the river’s edge,  elk were competing for territory, their eerie calls echoing off the valley slopes. The sound is haunting and impossible to describe; perhaps like a combination of the howling wind and a child’s toy trumpet 1 To be more accurate: when I was young, some of the kids in our neighborhood had colored plastic tubes, which they would twirl around over their heads to make noise. It sounded a lot like that .  Of all the beauty that I experienced during the week, I remember that sound more than anything else. 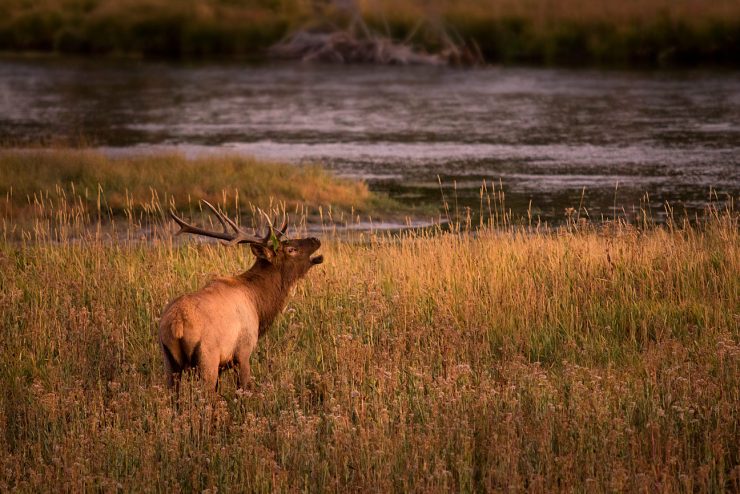 The next day, we visited more springs and geysers, including the magnificent Grand Prismatic. We drove through gorgeous scenery in western Wyoming, and camped someplace that I never saw in daylight. It was our final night of the trip, and the stars were bright, so I decided to try a set of time-lapse shots. The results were mediocre, but still fun to see. Next time, I’ll have to reduce the amount of time between shots (it was 1 minute between shots, for about 160 shots).