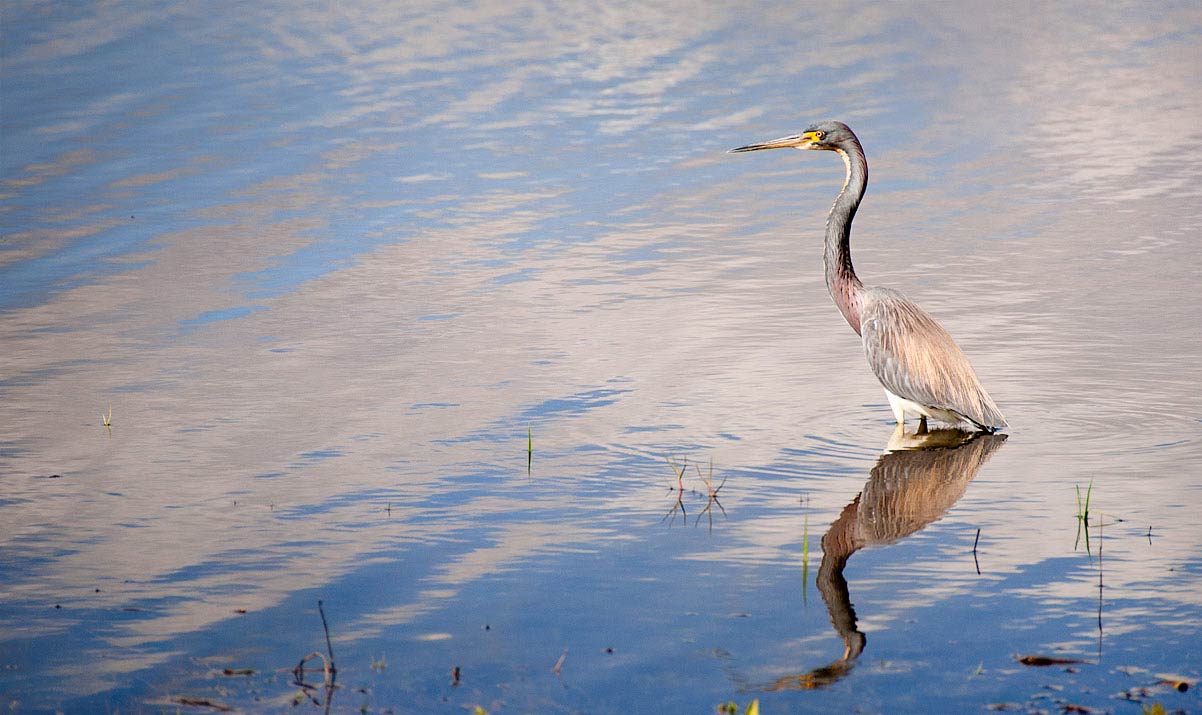 On Monday, I visited Myakka River State Park, which is just a short drive to the southeast of Sarasota. I wasn’t sure what to expect; the park’s website is very Spartan, and I didn’t find many quality photos elsewhere. But, at about 10 in the morning, I presented my $4 at the front gate, and started exploring.

I quickly realized that the park was larger and, thankfully, less accessible than I’d expected. There were plenty of tourists, but not many of them strayed more than 50 feet from the main road, so it was actually a peaceful and quiet place to hike. I use the term “hike” here in the loosest sense of the word; the ground is completely flat throughout the park. I started off with a short walk along the river and through a strangely skeletal forest. It was the end of January, but it was sunny and the temperature was in the mid 70s (F), so I had temporarily forgotten that it was still the middle of the winter. I walked through a stand of leaning, leafless trees – a testament to the season – but the undergrowth was still lush and green.

Immediately, I started counting unfamiliar birds. A small hawk in a nearby tree screeched at me. A Louisiana heron waded along the shore… the first that I’d seen in my weeks in the state. I saw massive alligators sunning themselves on the shore, though I couldn’t get close enough to take decent pictures.

The park has facilities for tourists; air-boat tours, canoe rentals, and a suspended canopy walkway, among other things, but I decided that I’d save all of that for another day and get off the beaten path (or at least find a slightly less beaten path). I headed away from the river and lakes and headed towards the Florida prairie. As I started towards the trail, I heard a rustling in the underbrush and was excited to see an armadillo amble onto the dirt road in front of me. I’d never seen one before in the wild, but they turned out to be very common in the park. Over the course of a ten mile walk, I saw at least six armadillos. One of them was so engrossed in its foraging under the leaves that it practically ran into me before it noticed my presence and trotted off.

As the trail headed away from the lakes, I passed through a dense, semi-tropical forest of palm, palmetto, and a variety of broad-leaf trees. As a photographer, the palmetto leaves were endlessly fascinating to me, with their elegant curves and strong lines. I stopped frequently to frame new compositions. Then very quickly, the forest opened onto the prairie. In parts, it reminded me of an African Savannah, but instead of tall grasses, the ground was covered with a dense mixture of palmetto and brush. The horizon was broken occasionally by a tall tree or palm, which were sometimes striking in appearance.

After walking for most of the afternoon, I’d only touched a corner of the park. I’m looking forward to returning in the near future for further exploration.