How Does the Mark III Compare

With the unveiling of Canon 5D Mark III, photographers have a difficult new decision to make. Since the still-impressive 5D Mark II is staying in the Canon lineup (at a reduced price: $1,499.95), we must consider who would benefit from spending the extra $1300 on a 5D Mark III. Whether you’re buying your first 5D series camera, or you’re considering the upgrade from your 5D Mark II, the decision is equally difficult. After all, $1300 is not a trivial amount of money; it represents a 70-200 f/2.8L (or numerous other excellent lenses), or an Elinchrom Ranger kit, for example. If you find yourself asking “Should I buy the Canon 5D Mark III or the 5D Mark II“, the answer will probably come down to an assessment of your shooting style in conjunction with the three major differences between the cameras: the sensor, the auto-focus system, and the processor.

Before looking at these three factors, though, it may be helpful to get an overview of the differences between the cameras’ specs:

The auto-focus system is the easiest place to start because it’s where we find the greatest contrast between the two cameras. Those of you who use the 5D Mark II (or the Rebel T2i/T3i, which use the same basic AF system) are probably already aware of its limitations: it only has 9 AF point, and only one of them uses a reliable cross-type sensor. Still, it performs well in most circumstances. In a studio environment, it works well… and for most landscape and natural-light portraiture, it’s great too. Furthermore, despite its imperfections, it has been used by thousands of wedding and event photographers for years, and many of them have produced remarkable work, even in difficult conditions.

But for every great shot captured, there have also been great shots lost due to focus problems. AF on the Mark II is simply not fast, accurate, or reliable enough for professionals shooting sports, high-speed action, or any low-light events involving a lot of action. For years, many 5D Mark II owners have been hoping that Canon would produce a new version of the camera with the robust AF system of the EOS 7D. 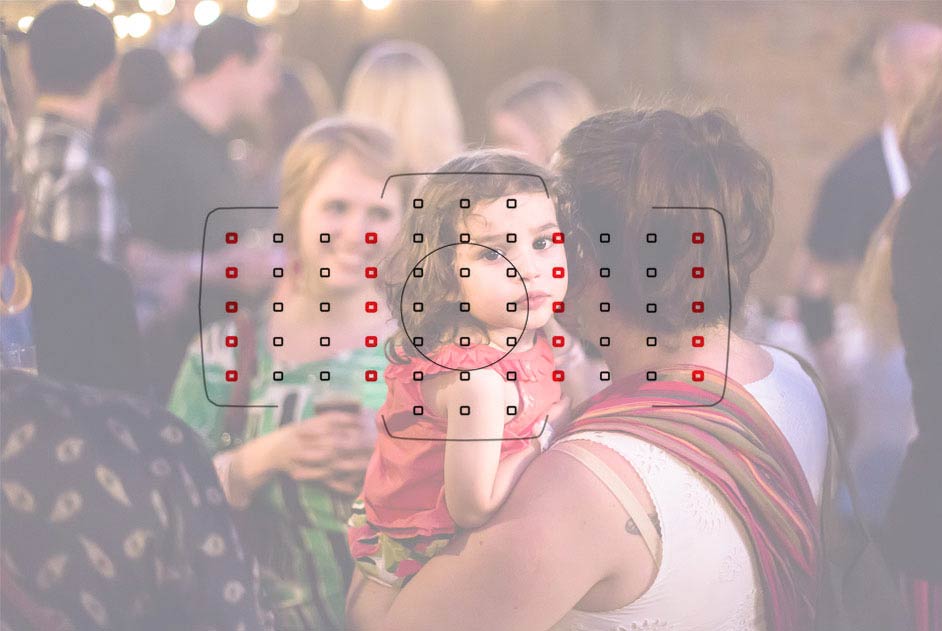 In this regard, Canon has our exceeded expectations. Instead of settling for the outstanding 19-point (all cross-type) AF system of the 7D, they gave the 5D Mark III the 61-point (41 cross-type) of the Canon 1D X, probably the most sophisticated AF system on the market today. The focusing points are not only numerous, they are high quality: 41 are cross-type, and 5 of those are dual-diagonal, high-precision, allowing the camera to quickly pull focus on virtually any type of detail. Enough said. If you have trouble focusing with the Mark III, the problem probably isn’t with the camera.

The Bottom Line: If your work is depended on fast, reliable auto-focus in any lighting situation, you probably can’t afford NOT to buy the new 5D Mark III. Journalists, event photographers, child-portrait and other wildlife photographers, this camera is for you. However (all joking aside), if you shoot fashion, landscape, portrait, and even low-light photography that doesn’t require top-speed AF, the 5D Mark II will more than suffice. The exceptions will be those photographers for whom 9 AF points doesn’t provide sufficient flexibility. While many photographers can focus and then recompose if necessary (when an AF point doesn’t fall exactly in the right place in the frame), this isn’t always practical for photographers shooting with the camera mounted to a tripod, or photographers working with an extremely shallow depth of field, such as f/1.2 lenses or shooting 1:1+ macro.

The new Digic-5+ processor found in the 5D Mark III is probably the most powerful CPU found in any SLR, about 17x more powerful than the Digic-4 found in the 5D Mark II. In practical terms, though, that means that’s its able to handle large volumes of data at faster speeds, allowing the 5D Mark III to shoot RAW files at 6 frames per second, which is a substantial step up from the Mark II’s 3.9 fps. Naturally some of that processor power is also used to drive the 61-point AF system described above, and it also is available for higher quality post-processing of images (HDR, lens correction, etc) and processing video.

The Bottom Line: Again, the processor differences between cameras only really depend on how you’ll be shooting. If you’re shooting sports, you’ll likely want the higher frame rate. However, even many event photographers who shoot some action will be satisfied with the four frames per second of the Mark II.

The new generation of sensor found in the Mark III is also less noisy at high ISO settings. Initial tests have shown that on the Mark III, the differences in noise between ISO 800 and 3200 are minimal, and noise level at 12800 are roughly equivalent (but slightly worse) to those found in the Mark II at ISO 3200, at least when the subject is well lit. In the shadows, I find that there’s only about 1-stop of difference between the sensors. This means that for wedding and event photographers, the 5D Mark III can produce photos that are high quality at ISO 3200, and very usable (particularly with judiciously applied noise reduction) when shooting at ISO 6400, which is an impressive feat. Usable, however, does not necessarily mean first-rate; we’ll still get better sharpness, detail, colors, and tonality at lower ISOs if we’re making large prints.

If you’re shooting for the web or making mid-sized prints, on the other hand, even at ISO 12800, the colors, noise, and sharpness of images produced by the Mark III are remarkably good. Color, in particular, seems to be handled well by the Mark III; I’ve been impressed by how vibrant the colors remain at high ISO where they would become dull, muted, and blotchy with many other cameras, including the Mark II.

The 5D Mark II also handles low light well, though, just not quite as well as the Mark III. I’d confidently shoot at ISO 1600 at weddings with the Mark II, and many photographers who are less conservative with their expectations happily shoot even higher.

The Bottom Line: Photographers who frequently shoot in low-light situations and need excellent high-ISO performance from their camera will benefit from the Mark III’s sensor, though not as much as they’d benefit from the astoundingly good performance of the Canon EOS 1 D X, which I briefly discussed here. With the 5D Mark III, shooting at ISO 3200 is now a viable alternative to shooting with ultra wide aperture lenses or using flash.

However, if you’re comfortable using flash or rarely need to shoot at ISOs higher than 1600, you won’t see a significant benefit in image quality when shooting with the Mark III, and the Mark II is still an excellent camera for studio and field work at low ISOs.

When it comes to video, the Mark III has improved codecs and controls,  a headphone jack for monitoring audio, and the HDMI output is a high quality 1080i resolution when monitoring live capture (the 5D Mark II drops down to 480 or 540p, I’ve found conflicting numbers). While I’ve read that the image quality is somewhat improved, and it’s clear that the Mark III handles moire and aliasing better than the Mark II, I do not shoot video, myself, so I will leave the comparison of video features to someone who is suitably experienced.

The 5D Mark III also has new “Silent” shooting modes, which could prove to be very useful in certain circumstances. In “silent single” mode, the shutter noise is dampened to virtually inaudible levels, obviating the need for blimps or other sound-suppressors on TV/Movie sets, for example, but the benefit for wildlife and other candid photographers is clear as well. Rapid silent shooting is also available, but limited to 3 fps, in “Silent Continuous” mode.

It is also worth mentioning that the 5D Mark III has improved weather sealing. Canon claims that it is better than that found in the Mark II, but not quite at the level of the 1D X’s construction. The Mark III also has other modest changes that I don’t consider to be of much significance: in camera HDR processing, a higher resolution metering sensor (the old ones work just fine), and in-camera image correction (vignetting, chromatic aberrations, distortion), which can already be handled by Lightroom or ACR with aplomb, and who uses a multi-thousand dollar camera without appropriate software?

Who Should buy the 5D Mark III, then?

All of these factors paint a fairly clear picture of who would benefit from buying the 5D Mark III. Photographers who work in a studio with flash, portrait and fashion photographers, product photographers, and most landscape photographers won’t benefit from the features of the new model, since they don’t usually need the high ISO performance or rapid frame rates, and the 5D Mark II will remain their best choice. All of that extra money can be spent on higher quality optics, like the new 24-70 f/2.8L II.

Journalists, event and action photographers who frequently work under poor lighting conditions, however, will see improvements in focusing accuracy and shooting speed, and image quality at high ISO, though high ISO image quality will still be significantly lower than low ISO image quality.  Furthermore, wildlife, street, and some event photographers may find the “silent shooting” mode of the Mark III useful enough to justify the camera’s price.

Please Comment! This article has only been able to cover some of the main differences between the cameras. If you still have questions, or if you have any contentions with the article, please let me know in the comments section below. If nothing else, I’m always interested to hear whether people are finding an article helpful.

Photo Information: The ISO comparison photos in this article (guitar, stack of books) were taken by Jonathan Stankiewicz, a new contributor to L&M. Each image was shot in RAW format and converted to JPG in DPP with no noise reduction, so images shot in JPG format with noise reduction or post-processed images are likely to appear even better. High ISO night-life examples were taken by Sebastien Barre in Albany, NY, shot in RAW format, and processed with ACR 7, with minimal but significant noise reduction and additional clarity. Light & Matter would like to thank both of these photographers for their helpful and beautiful images.