Canon’s entry into the mirrorless market sets up an obvious comparison: how does the Canon EOS M compare with the Nikon 1 V1, Nikon’s top-of-the-line mirrorless model? As the most recent competitor to enter the mirrorless market, Canon has had a chance to learn from others’ mistakes, and it appears that they have not let the opportunity slip by. In fact, if the EOS M is as impressive in reality as it is on paper, Sony may be Canon’s only real competitor.

It goes without saying that the Canon’s 18 megapixel sensor will create much larger (pixel dimension) images than the Nikon’s 10.1 megapixel sensor; however, 10 megapixels is generally more than sufficient for snapshots and family photos, and was common for professional use only 5 years ago. 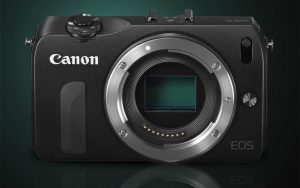 Perhaps more important than pixel count is the physical size of the sensor. Though Nikon has marketed the V1 as a large sensor, low-light capable camera, the designation is a relative one. The V1’s sensor, at 13.2mm x 8.8mm (116.16 mm²), is significantly larger than those found in iPhones and many point-and-shoot cameras, but is still among the smallest sensors in the interchangeable lens market, dwarfed even by the micro 4/3 format sensor. Indeed, the Nikon’s sensor is only only about 35% the size of Canon’s APS-C model at 22.3 x 14.9 (332.27 mm²).

Larger sensors allow cameras to produce images with shallower depth-of-field, creating portraits with smooth, blurry backgrounds, and more generally, allowing the photographer to isolate the subject from the rest of the image by means of shallow focus. This is probably the most important factor in distinguishing “the look” of a point-and-shoot photo from that of an SLR. [This is also why home video camera footage looks so different from professional cinema footage: even full HD footage from an expensive consumer video camera will look different (cheaper, in a hard to define way) than cinema quality because of the small sensor used.]

But size isn’t the only issue; also important is the density of receptors on the sensor. Although the effective pixel count of the V1 is 10.1 megapixels, the actual count on the sensor is 12 million 1 As reported by Nikon . This means that the pixel density is approximately 103.3k pixels per square millimeter. The Canon’s 18 effective-megapixel sensor contains 18.5 million total pixels, giving the larger sensor a density of only 55.7k pixels per square millimeter.

Why does pixel density matter? Generally, the higher the pixel density on the sensor, the worse the low-light/high-ISO performance. Since digital sensors are charged with electricity during the exposure, when there are more pixels in an area, more heat and electrical noise is generated, and since the receptors are smaller, there’s less light captured per receptor to create the image-producing signal. This means that in low light, images are riddled with more digital noise (ie, color shifts and smudgy, grainy texture). Technological differences between sensors can make a big difference, so occasionally sensors with slightly higher density of pixels produce less noise than lower density sensors, but these circumstances are rare within the same generation of technology.

While the Canon EOS M is basically an EOS Rebel T4i SLR in a smaller package, the Nikon 1 V1 shares several features with a traditional point and shoot, making them difficult to compare. For example, the Canon uses a mechanical shutter like an SLR, while the Nikon gives the user a choice of a mechanical or electronic shutter. Thus, while using mechanical shutters, the cameras are comparable: they both have a top shutter speed of 1/4000th second and shoot at around 5 frames per second (4.3 and 5, for the Canon and Nikon, respectively). However, when using the electronic shutter, the Nikon can shoot stills at up to 60 fps (for about 30 shots), and reach shutter speeds of 1/16,000th second. Unfortunately, Nikon reports that when using the electronic shutter, a flash sync speed of only 1/60th second is possible, which is considerably slower than when using the mechanical shutter… very disappointing for flash photographers hoping to tame the sun with fast shutter-speeds. Still, the V1 should have strong appeal for action photographers.

Oddly, the Nikon 1 V1 does not support aut0 exposure bracketing. In an age when HDR imaging is so popular, this seems like an egregious oversight.

The following table compares some of the important stats of the two cameras:

Unlike the Nikon 1 J1, the V1 does have a hot-shoe. Unfortunately, it is not a standard hot-shoe; it is only compatible with a dedicated flash unit, the SB-N5. This means that it will be impossible to attach a Nikon CLS system speelight to use as a master unit to control an off-camera flash setup, and even attaching pocket-wizards, RadioPoppers, or other radio-controlled flash systems will be impossible without the development of sophisticated adapters.

The Canon EOS M, on the other hand, includes a standard Canon hot-shoe, and therefore is compatible with any flash equipment that an SLR would be, from Speedlites to studio strobes and radio triggers.

Because the Nikon 1 V1uses a smaller sensor, it also can use a smaller lens mount and smaller lenses. This is an advantage for those who want to keep their camera kit small and portable. The Canon uses a slightly larger lens mount, but manages to keep dedicated M lenses relatively small.

Adapters are available for both cameras which will allow SLR lenses to be used on the mirrorless lens mount.  Because of the size of its sensor, it is practical to use EOS EF and EF-S lenses on the EOS M camera; you’ll get the same field of view and magnification as you would with an APS-C SLR. Adapting a Nikon F mount lens to a V1, however, is a little more tricky. Because the sensor is so small, there will be a 2.7x crop factor, so wide angle lenses will lose much of their appeal; even an 18mm wide-angle lens would perform much like a 50mm lens when fitted to the V1. However, telephoto lenses will give you dramatically longer reach; a 200mm f/2.8 lens will become a 540mm f/2.8 lens, which would be great for photographing wildlife. The very high pixel density of the V1 sensor, however, will reveal all of the optical flaws of the lens you’re using, however, so using high quality optics at their optimal settings will be particularly important. 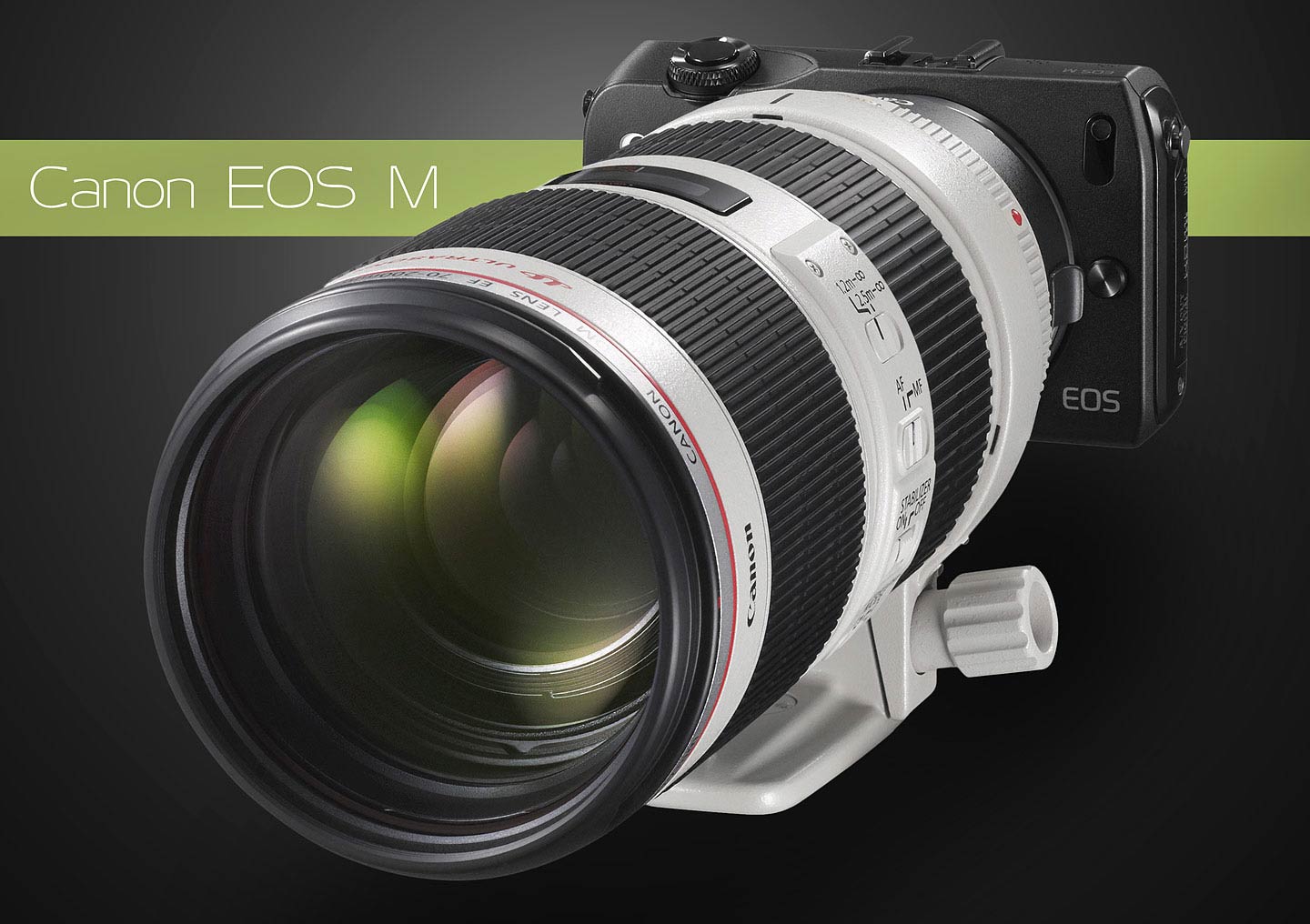 The Viewfinder and LCD

Though it won’t make a difference to some, many experienced photographers prefer to work with a viewfinder rather than a rear LCD, and the Canon simply does not offer one at this time. The Nikon, on the other hand, sports a 1.4 million pixel electronic-viewfinder (EVF) that even out-resolves its 921,000 pixel rear LCD.

It may be a little early to count the EOS M out at this point, though. Since the EOS M does have a mini-HDMI output (as well as a USB port), it is conceivable (though unlikely) that an add-on EVF will be available in the future, similar to those available for the Sony Nex-5N. A more likely (but less attractive) option is to use a loupe-style viewfinder, such as the HoodLoupe 3.0, which will fit the EOS M’s 3″ LCD.  Though simple, and relatively inexpensive, the loupe would add significant bulk to the compact camera, which mitigates much of its advantage over an SLR, and would make the touch-screen almost useless.

Though both cameras have a large, 3″+ rear LCD panels, only the Canon’s is touch sensitive.  Again, this may not interest everyone, but for those who are accustomed to the ease of use of a touchscreen, this is a considerable advantage for the Canon. A touchscreen not only making reviewing images easier, many people find it preferable to using tiny buttons to adjust the camera’s settings.

Like all modern cameras, the Nikon V1 and the Canon EOS M are both capable of amazing feats of digital processing. Rather than compare and contrast every one of these features, I’ll limit myself to highlighting some of the most popular. These are subject to change via firmware updates, and many will be of little concern to those who prefer to process their images on a full size monitor.

It is worth mentioning, however, that the Canon allows for in-camera HDR processing, hand-held night-shooting, and multi-shot noise reduction when shooting JPG. The Nikon is conspicuously lacking in the in-camera processing gimmick department, with no HDR, multi-shot NR, or sweep-panorama mode (which the Canon also lacks).

For those who can get past the absence of a viewfinder,  the Canon EOS M is a very powerful compact camera. It is a particularly good option for Canon SLR shooters who want something to use in situations that call for a small, discreet camera, but who also would benefit from the M’s compatibility with their collections of SLR lenses and its ability to easily shoot high quality video.

The Nikon V1, though a year or so older than the Canon, is still an impressive machine, and for those who yearn for a viewfinder, it is a viable option. It’s poorly conceived flash system will deter some users, but many will be satisfied with its small external flash or with and natural light capabilities, and it’s sensor size is large enough that photos taken at large aperture will still have a more professional look than you’d expect from a traditional point and shoot. For sports and wildlife photographers, the V1 offers some exciting features: its users can get extremely high frame rates, fast auto-focus, and with an adapter, large aperture telephoto lenses for long range shooting because of the 2.7x crop factor.

For the best of both worlds, though, Sony’s Nex-7 is still probably the best option, though at a somewhat steep price. The Sony Nex-5N with the optional viewfinder will be less expensive, but still significantly more than the Nikon 1 V1. Both models from Sony, however, contain a large APS-C sensor (slightly larger than Canon’s APS-C sensor) and a viewfinder. Furthermore, they are compatible with the full line of Sony/Zeiss and Minolta auto-focus lenses with the use of an adapter. It’s also worth mentioning that the Sony cameras also use an odd, dedicated hot-shoe, and adapters (ranging in price from $8 to $130) are also required for use with a full range of flash equipment.

We also expect Canon to announce a second, higher-end EOS M model camera within the next few months, which may also address some of these issues.