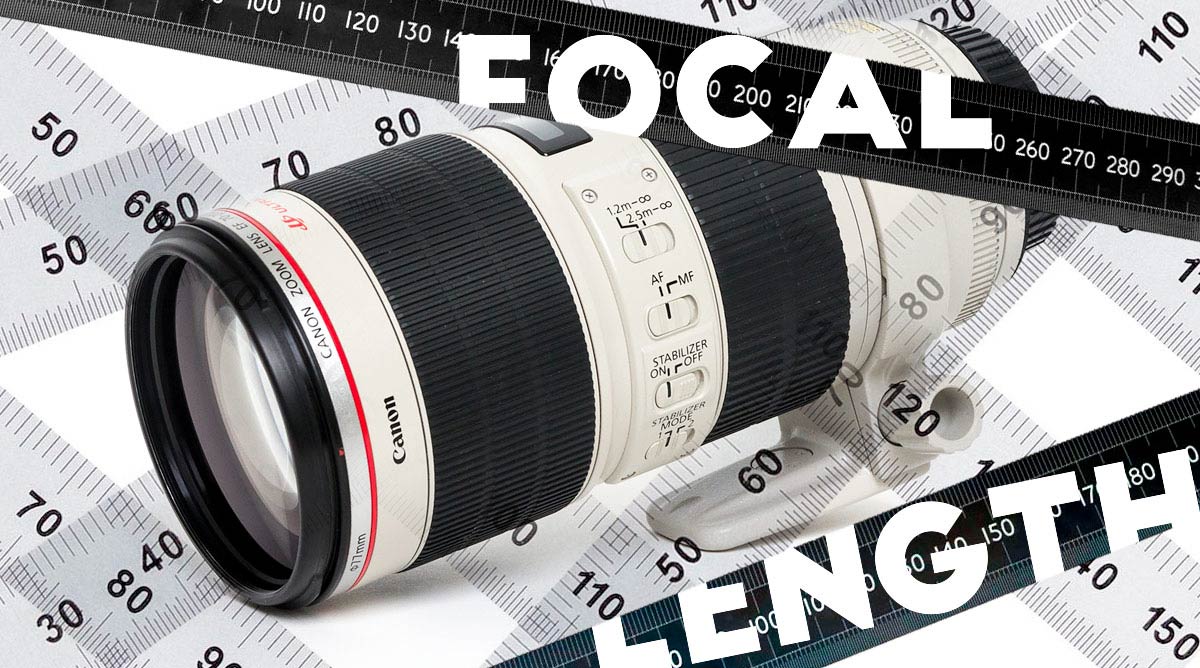 How To Calculate A Lens’ Focal Length : Slightly Simplified

I’ve been involved in an interesting exchange of ideas over the past couple of days with Tony Northrup about the effective focal length of Canon’s 70-200mm f/2.8L IS II lens when it is focused at distances closer than its infinity setting (ie, focus breathing). We’ve been coming up with wildly different numbers (mine were presented in a video last month), and we don’t have many outside sources to check ourselves against… perhaps because making the calculation is not a very straight forward process. So, if you’ve ever had the desire to see how your lenses really measure up or how much they breath, here’s how I do it, with a few of the tools that I use to make it faster. Much of this has been borrowed from a post on the StackExchange forum by user “Vivek”,  based on a method by Bob Atkins, so you may want to check that out for further information. I’d be interested to hear your measurements for this lens in particular at distances between about 5 and 12 feet from the subject.

I’d also love to hear your results from using other methodology, and your explanations of those methods. It would be great if I could find a testing method that’s easier than this and just as accurate or better.

To begin, mount your camera on a tripod near a wall or other vertical surface. Measure from the center of your camera’s sensor to the floor (you can use the vertical center of the lens mount). We’ll call this H. Then, tape something like a metric precision ruler (or metric measuring tape, depending on how wide the lens is) vertically to the wall, with the low end at the exact height of the center of your camera’s sensor from the floor (H). This is just to set up the square angle of a triangle. It’s also important to make sure that the camera is vertically aligned with the ruler. 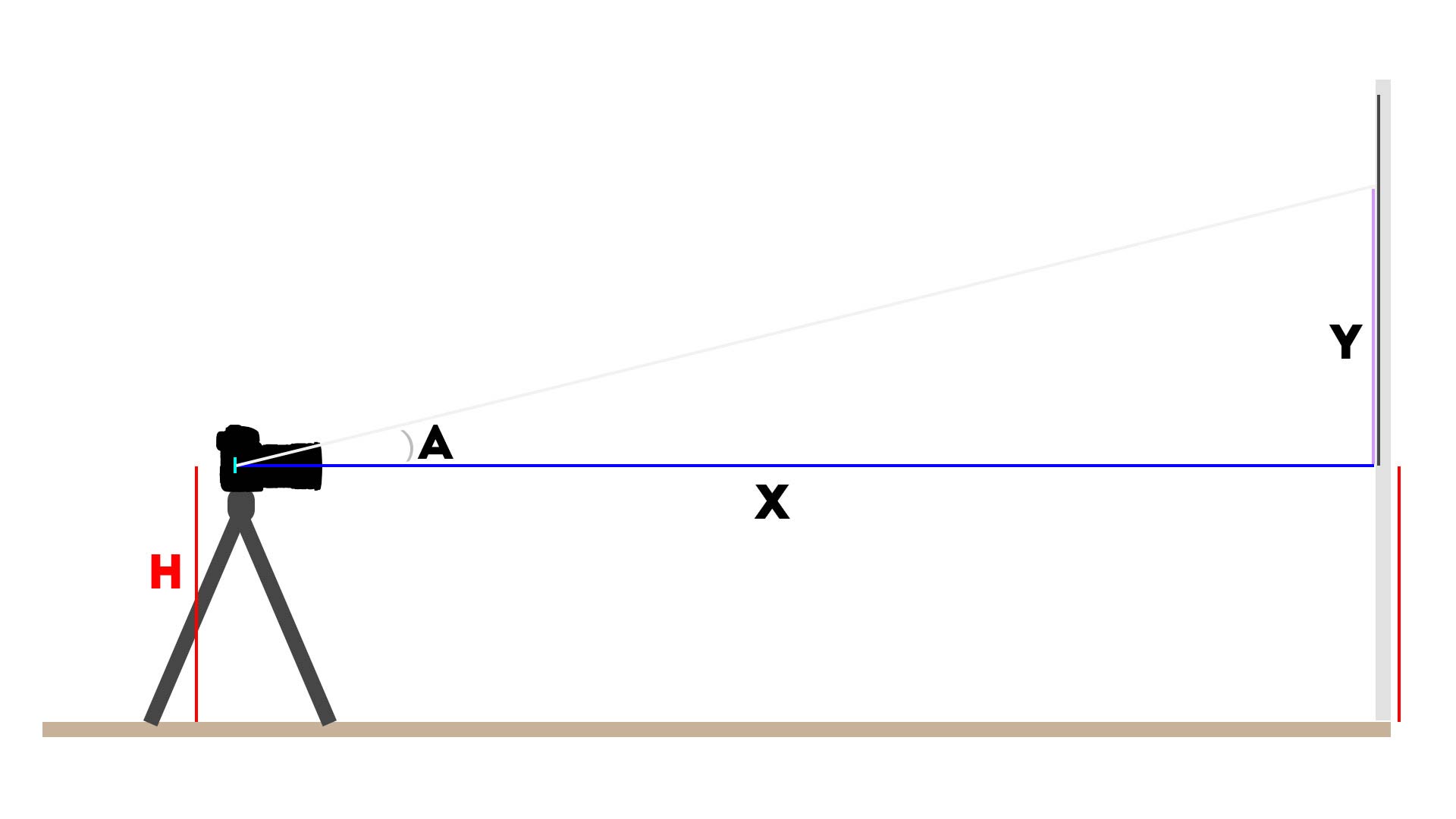 Distance From Sensor To Subject

Measure the distance from the camera’s lens mount to the wall/ruler in millimeters. I like to use a precise laser measuring tape. My Bosch GLM 50 is accurate to about 1.5mm, but some others are even better. If you’re careful and have some help, a tape measure will also work, though with reduced accuracy.

To your measurement, add the FFD (flange focal distance). These are the FFDs for the most common brands, but more can be found on Wikipedia:

Alternately, you can measure from the focal-plane marker on your camera, if it has one. If you do, it will look like the icon in figure 1. Personally, I find it easier to get an accurate and repeatable measurement from the lens mount, but that’s up to you.

Now, focus the camera and take a photo. If your setup is not completely rigid, take several photos to ensure that the exact center of the image is over the end of the ruler scale.

Next, load the image into Photoshop. Create a horizontal guide at 50%. That line should match the beginning of the ruler’s scale in the image. From there, it’s simple: look at the top border of the image and read where the ruler leaves the frame. That measurement is the opposite side of the triangle, which we’ll call Y.

If that guide didn’t match up with the beginning of the ruler’s scale, then adjust your camera and re-shoot or, if you’re comfortable with the ruler tool in Photoshop, figure out how far away the guide is from the start of the scale, and add or subtract that amount. You can avoid using the ruler tool or making estimates by centering your AF point at the 10cm mark rather than the very end, and then subtracting 100mm (plus or minus adjustments) from your final measurement, but since that adds in another opportunity for errors to creep in to the process, I prefer starting at 0.

If you remember your geometry, this is pretty easy, but it’s even easier using an online calculator, like this one at EasyCalculation.com.

Set the drop-down menus so that it calculates angle and hypotenuse side, though we only need angle.

d= the vertical size of the sensor, in millimeters

(α/2) = the angle we calculated above. Note that the angle above (A) replaces this entire expression, not just the “α”.

So, if you’re calculating the focal length using a full-frame camera, which has a sensor of 36 x 24mm, the equation should look like this:

For example, if we calculated an angle A to equal 3.22 degrees. Then:

So, how do you solve that? The easiest way is to give it to Wolfram Alpha. Just copy and paste it. It will solve for f, and f = your focal length, in this case it’s 213.3mm. [Update: As Bill Minton has pointed out, you can just as easily paste this into Google, and it will solve the for the focal length, too]. 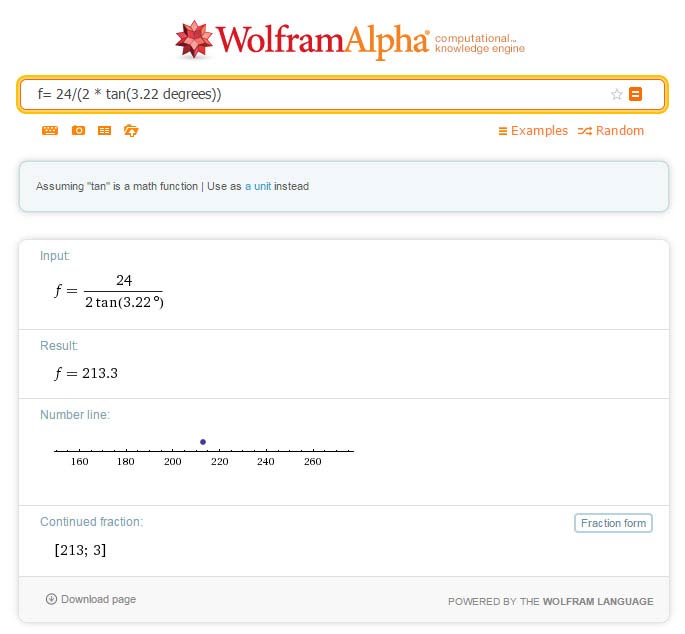 Incidentally, if you don’t type the word “degrees” or use the appropriate symbol, Wolfram Alpha will calculate the answer in radians rather than degrees, and the answer will look odd. It will give you an option, in the box that says “Assuming ‘tan’ is a math…”, to switch to degrees instead, though.

Visual: Over the past week, I’ve been looking at a couple of different ways to cross-check my measurements and make sure that what I’m getting makes sense. If you’ve seen my video comparison of the Canon and Tamron lenses and their breathing, you’ve seen a clip from Matt Granger’s video on the subject that shows the effect of breathing on his model while shooting video. It’s a simple, visual comparison but it shows what you’d expect: as the Tamron and Nikon lenses are focused towards the MFD, the subjects get smaller, but on the Canon, the subject gets larger.

I wanted a way to quantify this visual change, and Bob Atkins’ article on focus breathing gave me the idea for a way to do it. He used stars as subjects, but I live in Seattle, so that’s not a practical option (hello cloudy skies). So, instead, I used two small LED lights and did this:

I took an under-exposed photo, shot at f/22 (to cut down on bokeh/circle of confusion) with the camera sensor about 26 feet away from the lights, with the lens focused at that distance. The lens, incidentally, was the Canon 70-200 f/2.8L non-IS, since I had read that it behaves similarly to the IS II, but I hadn’t measured it for myself yet. It looked like this:

I then focused the lens to about 12 feet away (using the range indicator on the lens) but did not move the camera. The idea here is to get the same effect as Matt Granger’s racking the focus of his lens in his video, but at some distances that I could measure.

I then took a shot with the lens focused at 7 feet and at 5 feet.

The results can be seen in this GIF:

As you can see, I loaded those images into Photoshop, set guides to mark the centers of each light (easier than I expected to get within a few pixels of the center) and then used the ruler tool to measure the distance from center to center. Those distances are marked on the images above.

Even without the numbers, though, it’s plain to the eye that the lights are getting further apart; the distances involved are not especially subtle. This can be seen simply by looking through the lens and racking the focus. (Note that the CENTERS of the lights are getting further apart, not just the the edges. If I had simply opened the aperture to increase the size of the blur, we’d see results mimicking what you’d expect from zero focus breathing).

But we can look at the numbers, too, so here they are in table form:

After doing this, I went back and measured the focal length of the lens at each of these distances from the subject using the original method that I outlined above. My measured focal lengths were:

Now, take a look at how these two sets of numbers compare.

They’re not a perfect match, of course, but part of that reason is that there was a lot of room for slop in this second measurement; I had to set the focus to 7 feet by looking at the range indicator window on the lens rather than by actually focusing on something, for example. But they’re still pretty close… the worst difference is about 3.75%.

Some people have claimed that the Canon 70-200 f/2.8L and IS II do not breath at all. If that were the case, then both of these sets of measurements would have to be off by at least 20% at the 5 foot mark, but hardly at all at the 26 foot end!

I’ve measured a several lenses this way, each lens multiple times, and the numbers have all come out as I’d expected (after a brief moment of confusion in one case). It’s not my formula, but the equation is simple enough, and certainly makes sense to me. That said, I’m certainly open to the possibility that there’s a mistake or that it’s missing something that would make it more accurate. If it is, and you can explain it to me, I’d be very grateful. Please let me know in the comments below!

On the other hand, if I’ve been unclear about some step in the procedure above, feel free to ask. Good luck!