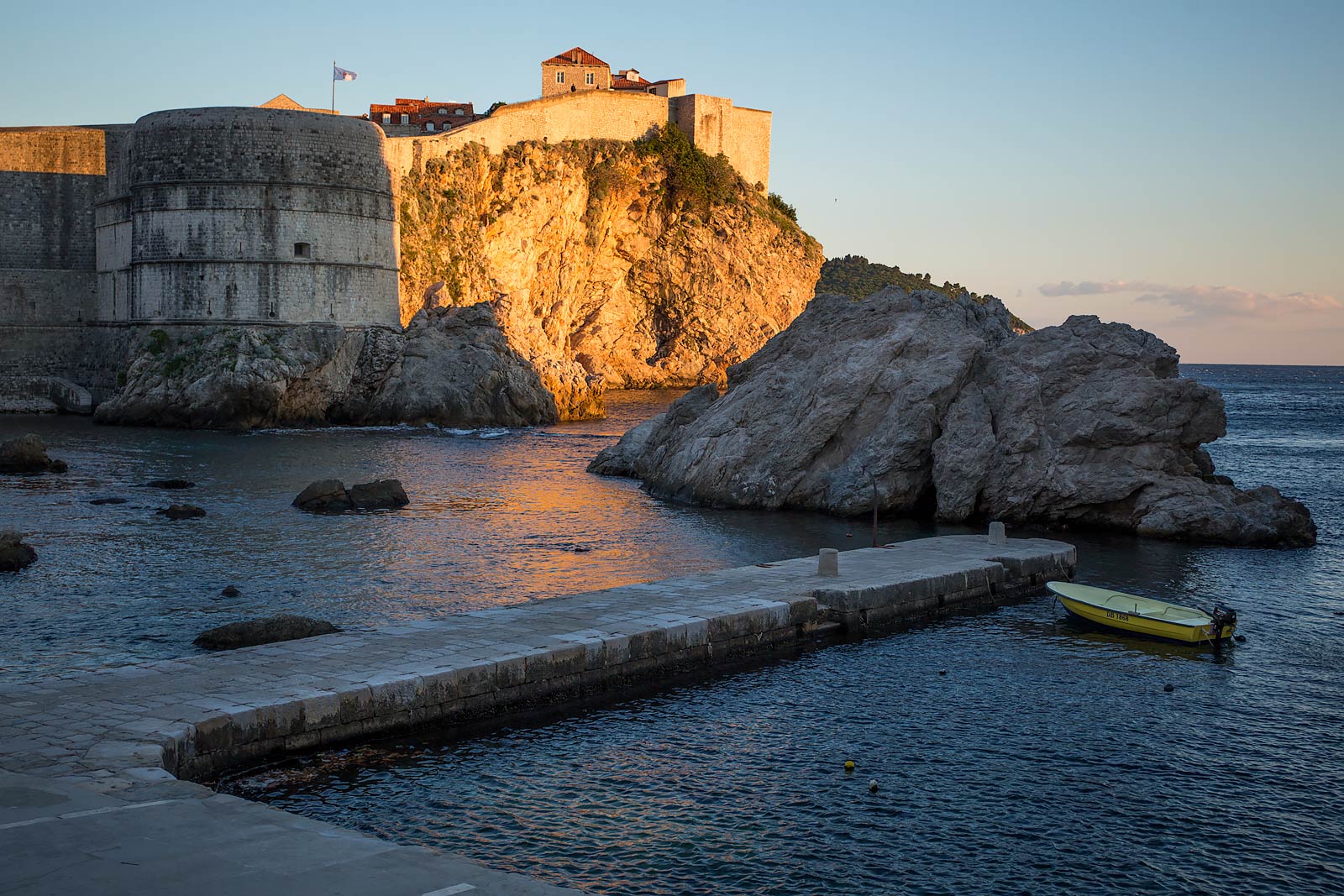 Photography in Dubrovnik Part 3: North of the City and Ston, Croatia

Just north of the walled city is a large park (Park šuma Velika i Mala Petka) with forested hiking trails and cliffs along the shore, and I made it my destination after spending some with a map.

The cliffs that line the shore are high enough that I was nervous standing on the edge for very long with the wind whipping around, but the view was spectacular. I also discovered that the cliffs and forests were filled with old military fortifications, with bunkers, trenches, and tunnels hiding in the brush. I couldn’t help myself and pushed my way through the spider webs to explore a few of them, but there was nothing interesting to be found… just dank concrete and dirt.

Looking north I liked the view of a little crescent of rocky islands and a lighthouse perched among them, and I decided to sit and wait for the sun to drop lower in the sky. While I was waiting, I chatted with another hiker who was running by with his dog, and he suggested that I visit the walled city of Ston, an hour or two north by bus. He also confirmed that I could eat the bright orange and red fruit from the nearby bushes called strawberry fruit, since I was getting hungry. I tried a few and they were palatable and took the edge off my hunger.

As the sun got low, it dipped into a bank of hazy clouds, so the evening light was milky and flat, giving me some nice pastel colors. I shot pictures until dark, and then walked home.

When I woke up in the morning, it was a pretty day, and I decided to take my fellow hiker’s advice and go to Ston, Croatia. I grabbed a toothbrush and change of clothes and stuffed them into an empty spot in my ThinkTank Shapeshifter and strode off to the bus terminal. I was an hour early for the next bus to Ston, so I used the time to grab a bite to eat, and then I pulled up the Booking.com app and found a room for the night in the center of Ston. It was a great little place (the Villa Sol), with two beds and a nice bathroom for $25/night, and it turned out to be one of the nicest rooms I found in Europe.

Ston itself had a lot of potential, but I didn’t get many photos out of it. Like Dubrovnik, Ston is a walled city, and the walls are touted as being the longest in Europe… and it’s not hard to believe. They run around the city, up a mountain to a fortress, and around the side of the mountain to another small village.

Perhaps more interesting than the city walls were the salt evaporation pools near the harbor. For centuries, Ston has used the pools to manufacture sea-salt, and as you’d expect, the pools are great for finding reflections on a still day. Unfortunately, not long after my arrival, clouds started rolling in, and I had poor evening light, and when I returned at dawn, the cloud cover was even heavier. I did take a few shots, of course, but this is an area that I’ll need to come back to in the future. I spent the rest of the morning walking around the olive orchards before taking the bus home.

One of my biggest oversights for the first half of my trip was ignoring the Lovrijenac fortress, just north of the city walls. Of course, I could see it from the city, but I didn’t take the time to explore the area up close because it seemed to be so dense with tourists. Much to my delight, though, in late October, the tourists dropped off heavily, so I started visiting Lovrijenac every evening.

Looking south, the little harbor is always in the shade of the fortress in the evenings, while the setting sun lights up the main city walls behind it, which is very striking. From the opposite direction, the sunset will light up the clouds behind the harbor and fortress, which is equally beautiful.

Walking further north, beyond Lovrijenac and up a hill to Gradac Park, provides a vista including the city walls and Lovrijenac together, but the profile of the fortress didn’t seem interesting enough to me to make a good photograph. I also was plagued by clear blue skies, which also make for boring photos.

I didn’t limit my wanderings to parks and cliffs, though. Some mornings I’d simply start walking to see where I’d end up. The farmer’s market was a nice change of pace, for example. Every weekend morning there’s a farmers market in the old city, but it’s just a tourist market, selling overpriced olive oil and grappa to Germans. At the other end of the city, though, there’s an indoor fish fresh fish market and farmers market that’s used by the locals, and it’s fun to poke around. I walked around the new harbor where all the cruise ships dock, and the shopping centers of the new town.

And I’ll leave you there, this time. Perhaps later in the week I’ll post about my experience with walking to Bosnia and Herzegovina, if any of you are interested.

I’m always interested to hear any questions that you might have, either about photography, the locations, or just life in general. Or, if you’ve been to Croatia, I’d love to hear whether your experiences were similar. Let us know in the comments section below!