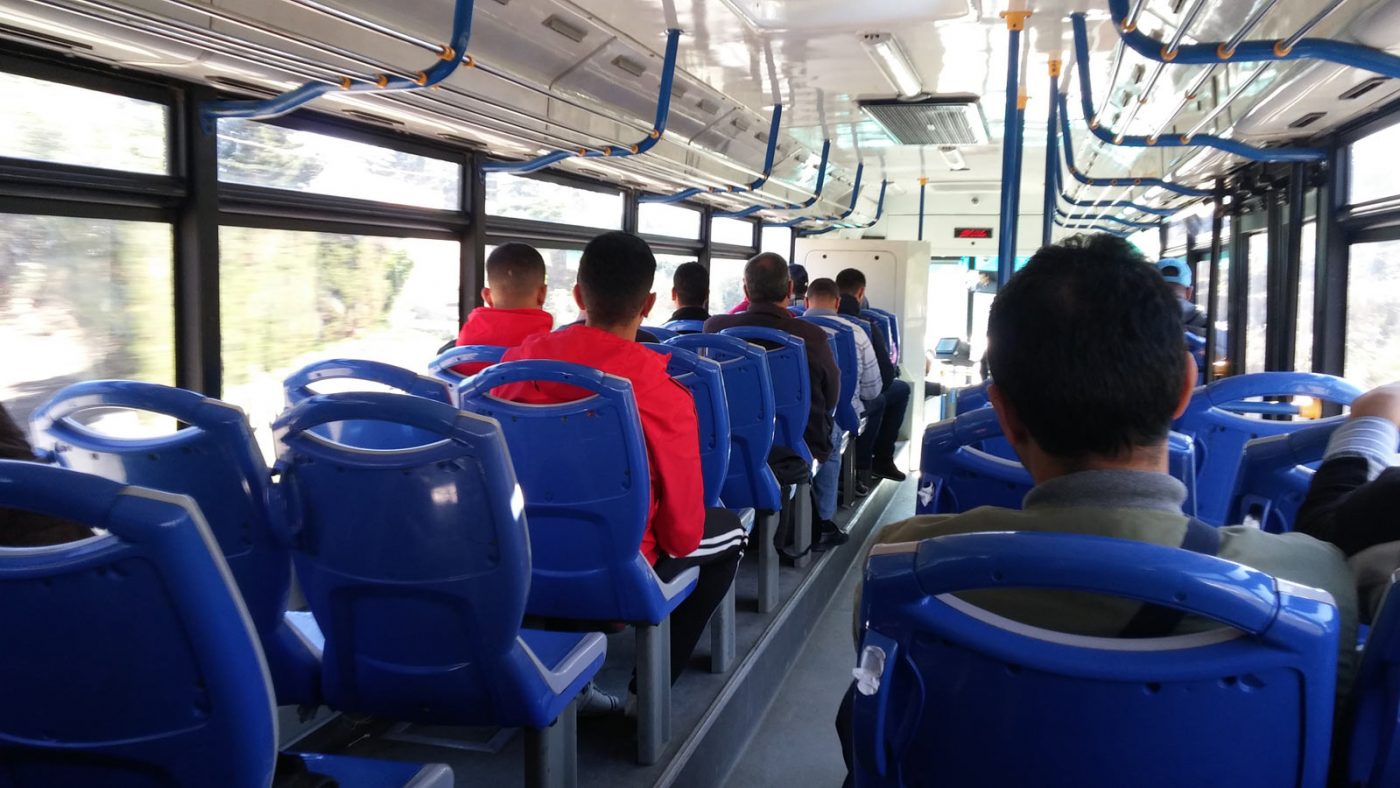 The Bus From Tangier to Tanger Med : It Exists

Getting to Tanger Med by Bus

There is a bus that runs from the Tangier Ville train station in the city of Tangier to the “Tanger Med” ferry port, contrary to popular belief. I found no information about it in Tangier; it was pure luck that I ran across info about it in a TripAdvisor forum post, so I’ve decided to post a little further information about it here. I hope someone finds it helpful. It does seem to run hourly throughout most of the day. [Last updated on March 22, 2019. Check the comments section for further updates.]

The fare is 7 dirhams! Yes, a mere 70 cents or so. That’s hard to beat for a 40km ride. You pay as you get on the bus; no advance ticket necessary.

What Bus Is It?

The bus is a blue or white ALSA city bus, number I-3. That’s a capital “i”, not an L or 1. You’ll see it either written as I3 or I-3 on the bus itself, so don’t confuse it with bus 13. The I-3 bus info was on the ALSA website for a while, but has now returned to top-secret status, almost. The info for the line is not displayed (it returns an error), but if you use the search function from Tanger Ville to Tanger Med, it will display the next run time (if you’re lucky). You can find it here: https://www.alsa.ma/tanger

Where To Catch the Bus

You’ll catch this bus near the Tangier Ville train station, a block to the right (east) as you’re leaving the main entrance, according to Piotr (see comments section) and Google maps as of November 2019. However, this bus stop seems to shift around pretty frequently, so check the comment section below for updates.

It may also be a good idea to check with the information desk inside the front doors of the station for the current location of the stop. I did so when I took the trip, and the woman at the desk was moderately helpful.

For the reverse trip, from Tanger Med to Tangier Ville, Sara reports the following:

There’s a white bus stop on the national road 16. When you get out of the port, you have to go straight up the road where the taxis are waiting until you arrive to the main road, don’t cross the road, turn right and walk about 200m, and you’ll find a white bus stop, that’s where the I-3 will stop.

I haven’t made trip in this direction myself, so I can’t substantiate it, but it does sound consistent with what I remember from the Tanger Med port.

The bus seems to run hourly during the day. I showed up at the bus station at 10:00 AM, and the bus arrived at 10:30. I occupied my time in between fending off taxi drivers who were sure that I’d find their taxies much more comfortable than the bus. The ride to Tanger Med took me about 55 minutes. If you take a taxi, they’ll manage it in about 40-45 minutes… though they’ll tell you that it will take them only 15 minutes or 20 minutes while you wait for the bus.

About the Bus Ride

The bus ride is just fine: it’s not a luxury coach, it’s just a regular city bus, but they’re new and clean. In my case, most of the other bus passengers were port and ferry workers (there’s a bus stop for employees), but some other ferry passengers, too. It was a fragrant trip, but not intolerable.

The outside of the bus claims that it is “climate controlled”. As far as I can tell, this means that they leave the vent in the top of the bus open… though it may have just been that it was mild weather and nothing else was needed.

A note about the Tanger Med waiting area: it’s called a WiFi Zone, and while I could connect to the network, there was no internet actually available… not even a pay-wall sign in. So make sure you have other data options, if you need it.

Other Options: Train and Taxi

There is supposed to be a train that runs from the Tangier Ville station to the new Tanger Med station twice a day. For me, they were not at convenient times, so I didn’t try it, but the cost was just a few dollars. Once you get to the Tanger Med station, there’s a shuttle that takes you the additional 3km in to the port.

Taxi, though, is by far the most popular way to get to Tanger Med. By USA standards, it’s still very cheap for a trip of that distance… or at least, it can be. You’ll need to use one of the Grand Taxis (beige), not the little blue ones.

If you’re at the train station, the taxi fare should be no more than 200 dirhams to Tanger Med, but like everything in Morocco, you may need to haggle. They may ask for 250 or more, at first. If they don’t come down to 200, just go to the next taxi, or tell them you’re taking the bus for 7 dirhams… that’s a good bargaining chip, and it will bring them down fast. ALWAYS agree on a fare before you get in the taxi. Some taxis may charge you less if you agree to let them pick up and drop off other passengers along the way, though you might as well just take the bus if you’re going to do that.

As I was walking to the bus station, some guy tried to lead me to a taxi instead (as usual). I said, “No, I’m taking the bus.” He responded “But it’s Monday! No bus on Monday! It’s a holiday… you must know this!” I ignored him, and of course, there was no problem. If you’ve been in Morocco for a while, you’ll get used to people lying to you all the time, trying to trick you into one thing or another, but if you’re new to the country, don’t fall for it. Just ignore anyone who isn’t official and who tries to get you to go anywhere.

I made this trip to Tanger Med on the 7th of November, 2016. If you’ve made the trip more recently, please comment below and let us know that the information is still accurate. It has now been accurate for at least one year, so it should be the same for the near future, at least.

Oh, and if you found this post helpful, please support us by finding your hotel or hostel through the links below!