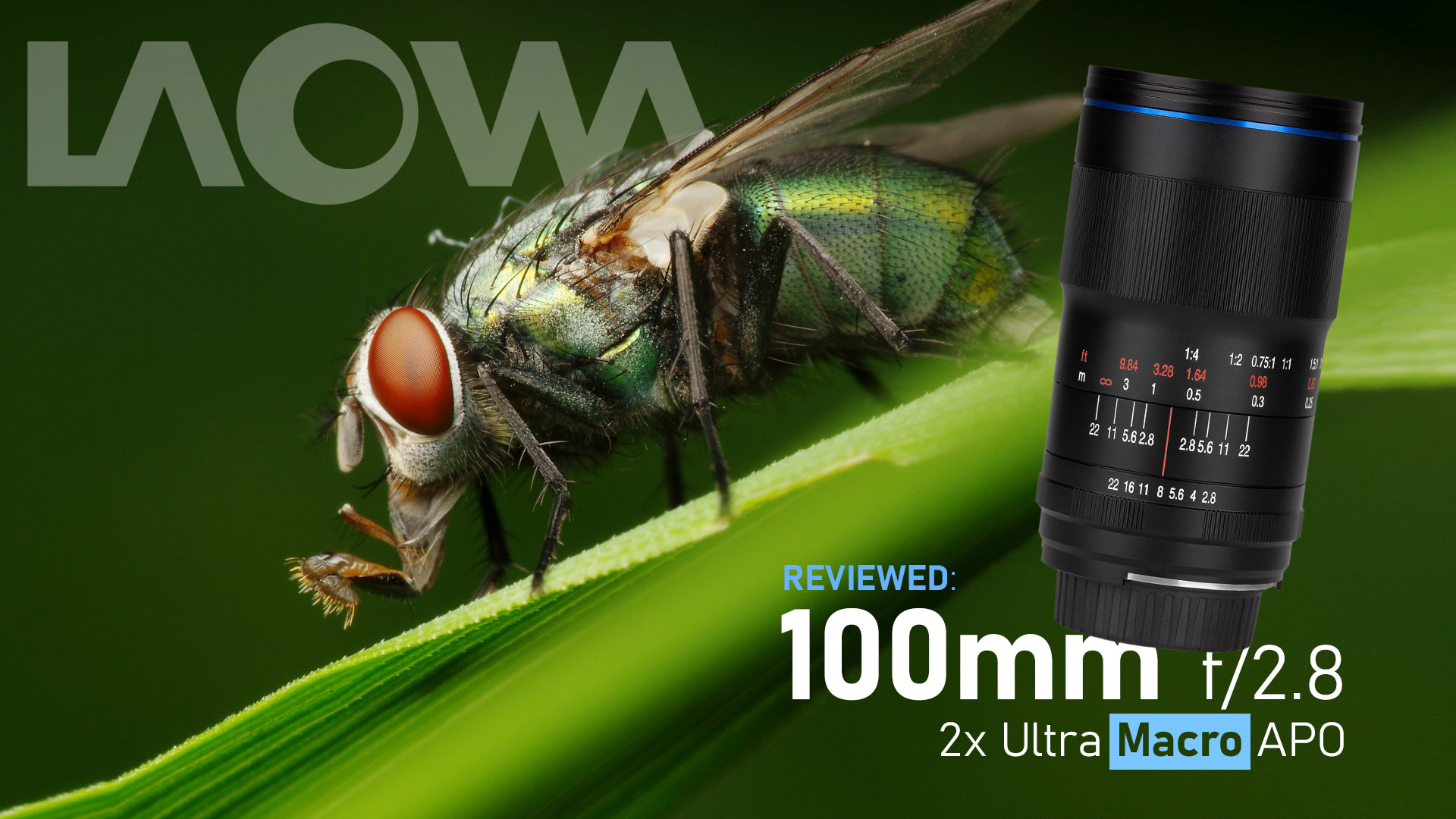 With their Laowa 100mm f/2.8 2x Ultra Macro, Venus Optics targets macro photographers who want larger-than-life magnification. Laowa is a third-party manufacturer designing for two market segments not always well served by the major brands: ultra wide angle and large magnification macro. The brand is starting to make a name for itself with well-built lenses, excellent optical performances and fair prices. What’s more, on many mounts Laowa lenses are the only option available for photographers who want macro larger than 1x without extension tubes, diopters or reversing rings (see our Thomas Shahan article for reverse-ring macro details).

The Laowa 100mm F2.8 2x Ultra Macro is one such lens. The lens is available for Sony FE, Pentax K (with auto aperture), Nikon F and Z, Canon RF and EF. Today I am testing the Pentax K version, but findings apply to all mounts.

The lens has a solid, metal body with engraved markings. It measures 2.8 x 4.9 inches (72 x 125 mm) and uses the common 67mm filters. At 1.4 pounds (650g), it is fairly heavy. The lens is officially “internal focusing”, but that’s not strictly true. The outer barrel doesn’t extend, but the whole lens assembly moves inside the barrel, just like it did on older lenses. To prevent damage to the inner components of the lens, Laowa ships it with a UV filer which should remain permanently attached to the front.

The focus ring is wide and easy to find. Its throw is about 60⁰, surprisingly low for a macro lens. Normally I prefer a longer throw for precise adjustments. In this case, the dampening helps to achieve precise focus and to avoid unwanted movements.

The aperture ring is located close to the mount. On most versions, the aperture can only be controlled on the lens, with no communication with the camera, but Canon’s EF version comes with a chip for aperture control and Pentax’s version uses a mechanical coupling for aperture control, thanks to the K-mount’s backward compatibility.

Macro lenses come with high expectations regarding sharpness. In this regard, the Laowa 100mm does not disappoint.

Center sharpness is very good wide open and reaches impressive levels at smaller apertures. Edges and corners never catch up fully with the center, but reach excellent levels at apertures between f/8 and f/16, well aligned with macro applications where a deeper DOF is required.

On APS-C cameras, the lens benefits from the sweet spot offered by the crop and sharpness is uniform across the frame at f/8 and smaller apertures.

In summary, the lens’s sharpness results are well aligned with the probable use cases. For macro work, where depth of field must be maximized, the lens offers high resolution and uniform results at smaller apertures. For portraiture and applications with subject isolation, the lens offers high center sharpness with some compromises on the edges where the scene will likely be out of focus anyway.

Since the Laowa 100mm f/2.8 Ultra Macro is a manual lens, it does not communicate with the camera and cannot benefit from in-camera corrections.

Distortion is minimal, at -0.9%. This is to be expected with a short tele, since those designs are less prone to suffering from distortion effects.

Despite using only 7 aperture blades (this figure varies depending on the lens mount), bokeh with the Laowa 100mm is superb. Even wide open, there is good subject separation, pleasing highlights with mostly circular shapes and smooth transitions even with busy textures. As the aperture closes, the shape of the iris becomes visible on the highlights but the general effect remains pleasing, with no harsh edges.

Aberrations are a mixed bag.

On the plus side, the Laowa 100mm is devoid of chromatic aberration at all apertures. There is also no purple fringing. The following images illustrate how the lens performs regarding chromatic aberration, with the focus locked on the center of the frame. Lenses are often more sensitive to CA in the out-of-focus areas.

When shooting at high magnifications, focal length plays almost no role on the depth of field; the magnification itself is the biggest driver. As such, many photographers will prefer a lens offering a longer working distance, to avoid getting too close to the subject. In that regard, the Laowa 100mm hits a sweet spot favored by many photographers.

2x macro is something not all photographers will be used to. For many subjects, it’s actually too much magnification; it is ideal for petal textures rather than whole flowers, small insects rather than whole butterflies. For many, this kind of magnification requires specialty lenses, extension tubes or other devices which make it more complicated to take pictures. Lenses such as the Laowa 100mm simplify operations, retain the ability to focus at infinity, and on some mounts even offer automatic aperture coupling. This makes the lens much more convenient than other alternatives.

Conclusion: Should You Buy It?

It is obvious that the Laowa 100mm F2.8 2x Ultra Macro is a versatile product. On some mounts, it is the only way to reach larger-than-life magnifications without the use of adapters, diopters or extension tubes. The ability to focus from 24.7cm to infinity makes it flexible and straightforward.

Optical performance is generally excellent, with the exclusion of flare which is present in most circumstances when a light source is present in the scene. Resolution is high and bokeh is superb, two desirable attributes for macro lenses. Even the price is fair at about $450 USD, lower than many first-party macro lenses.

There are few other options offering 2x magnification on the market. One of those is Laowa’s own 60mm F2.8 . This lens also delivers excellent results but lacks the auto aperture control on some mounts (along with their 65mm for APS-C Sony, Canon M and Fuji mounts). Most of the time, the Laowa 100mm will compete with brand-name macro lenses which are likely to lack larger than 1x magnification, even though they will offer AF. So if 2x magnification is desired, the Laowa 100mm is a compelling choice, with little competition.

You can buy the Laowa 100mm Macro lens at B&H Photo, Amazon worldwide, or Adorama to support our work here.

What is your experience with macro lenses in general, and with this Laowa in particular? Feel free to comment below.