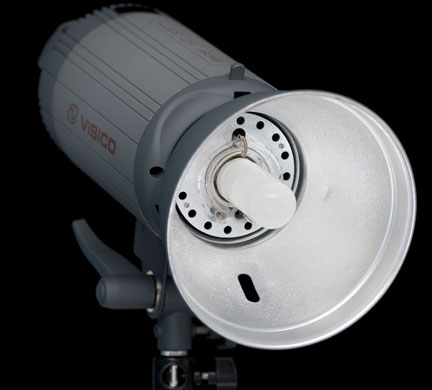 My photographic background is in journalism, but over the past few years, I’ve found myself in more and more situations in which a more powerful studio flash would be useful. I wanted strobes that would give me modeling lights and would also support large soft boxes (rather than the umbrellas that are so easy to use with a speedlight). Since I’ve seen a  basketball court lit by a couple of Nikon SB-900s (4 AA batteries each), and since soft boxes are only really effective at short range anyway, I wasn’t too concerned about getting anything above 400 WS. Eventually, I found the Visico Excel VC-300 for less than $180, including shipping, and decided to try a couple of them.

Although the brand is sold at B&H under the “Impact” name, I bought the lights from OEC Camera Accessories (Ebay Store) and had wonderfully fast shipping and great customer service. Their Ebay store has a lot of great stuff at low prices, actually, ranging from big softboxes and strip lights to huge octabanks.

Upon arrival, I was pleasantly surprised by the feel and construction of the units. The surface of the body is rubberized which makes it comfortable to grip, but also reduces noise and glare from the surface. Not only is the strobe body covered, but the rear side of the included 7″ reflector, the stand mount, and the knobs are rubberized as well. The controls on the back panel are also very satisfactory. The power output adjustment knob rotates smoothly and easily, and the power switch feels pretty sturdy. I’m not a huge fan of the bubbled plastic buttons which control the refresh-indicator beep, the test trigger, slave status, and the modeling light power adjustments; they remind me of a lot of electronic toys I had in the 80s.  Still, for what they are, there’s nothing wrong with them. 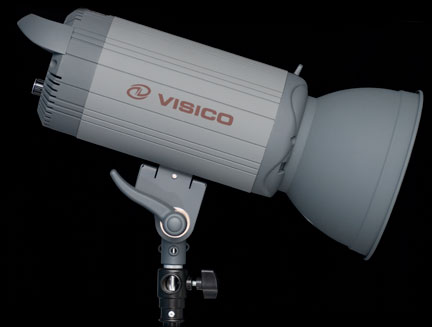 The flash works exactly as one would expect; plug it in, turn it on, and give it a second to charge… then trigger it. No problems there. At full power, the flash takes 2-3 seconds to charge, but if you drop the power a couple of stops, the recharge time is a second or less. The modeling light does remain OFF during the recycle period. This is annoying if the modeling lights are the only light source in the room, especially if you’re using full power, since you’ll be sitting in complete darkness for a few seconds. On the other hand, if you’re not using the audible “beep” charge indicator, the fact that the lights are back on lets you know where things stand. In any case, this is standard behavior for a monolight, so I can’t complain too much.

The power on this flash is adjustable from power level 1.0 to 6.0 in tenths, with each full level representing one f-stop (ie, twice as bright as the previous power level). Thus, power level 6.0 is full power, 5.0 is 1/2 power, 4.0 is 1/4 power, and so on, down to level one, which is 1/32. Because the adjustments are decimal, they are not perfectly suited to photographers who use 1/3 stop exposure adjustments, since power level 1.3 (for example) is actually about 3/100ths of a stop less than a 1/3 stop additional exposure (whereas 1.5 is exactly 1/2 stop). In practical terms, I don’t think that the difference is significant.

Unlike many lights in this price range, the Visico VC-300 has an automatic power release feature when you reduce the power level. If your flash is set to power level 4, for example, and you turn it down to level 3, you don’t need to trigger the flash to release the extra power. When you reduce the power level on the VC-300, the LED power level display begins blinking, indicating that excess power is being released. Once the actual power-charge  matches the desired  level, the LED display will return to solid and the resulting flash output will correspond.

So far, I’ve found the color temperature to be consistent between lights and from beginning to the end of a shoot, although I have noticed that for the first few flashes can be a little less consistent in brightness and color. That said, I haven’t done any in-depth  testing; since color correction is so easy in Adobe Camera Raw, it hasn’t been an issue. I’ve used the lights with radio triggers and as slaves, and both work as you’d expect. The triggering voltage is low enough that they can be used with modern digital cameras directly, although I haven’t tried it.

The modeling lamps are much yellower than I was expecting, but since they’re not image forming, I don’t consider it to be a big problem. The socket is the same size as a standard household lightbulb, and I’ve considered replacing them with something else. Initially, I thought that some nice, bright CFLs would be a good replacement, considering that they could be so much brighter without producing any significant heat, but of course the constant on and off would be awful for the CFL’s ballast, so I don’t think I’ll risk it. I see that Calumet is selling a similar bulb (Calumet # OL1000) for about $30 each, but they’re just Sylvania 18897 halogen bulbs, which can be found for about half that much around the internet. 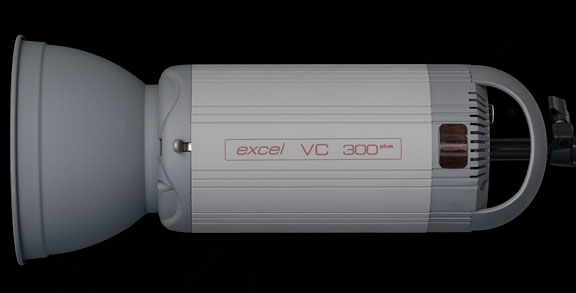 The mechanical controls for positioning the light also work as expected. As I’ve mentioned, they’re all rubberized, which gives them a better grip and feel than other inexpensive lights that I’ve used.  There’s a single main lever that controls tilt positioning, and smaller knobs to lock the umbrella and stand-post into place. There’s also a rail which allows the entire unit to be slid forward or backwards over the lightstand when the center of balance has been changed by a heavy soft box or other large accessory. This may be a good idea, but since the only way to operate it requires a Philips head screwdriver, its not very convenient.

After months of testing in the studio and on location (wedding), I’d be comfortable recommending the Visico VC-300 Monolight to anyone looking for an inexpensive but good quality strobe setup. These lights did come with a one-year warranty from the seller (not covering the bulbs) which adds some additional confidence. If I were a professional portrait/fashion/studio photographer and making plenty of money to cover equipment costs, I might opt for lights with a better known name, but even then, I could buy several extras of these lights for the price of a similar light under a popular name.