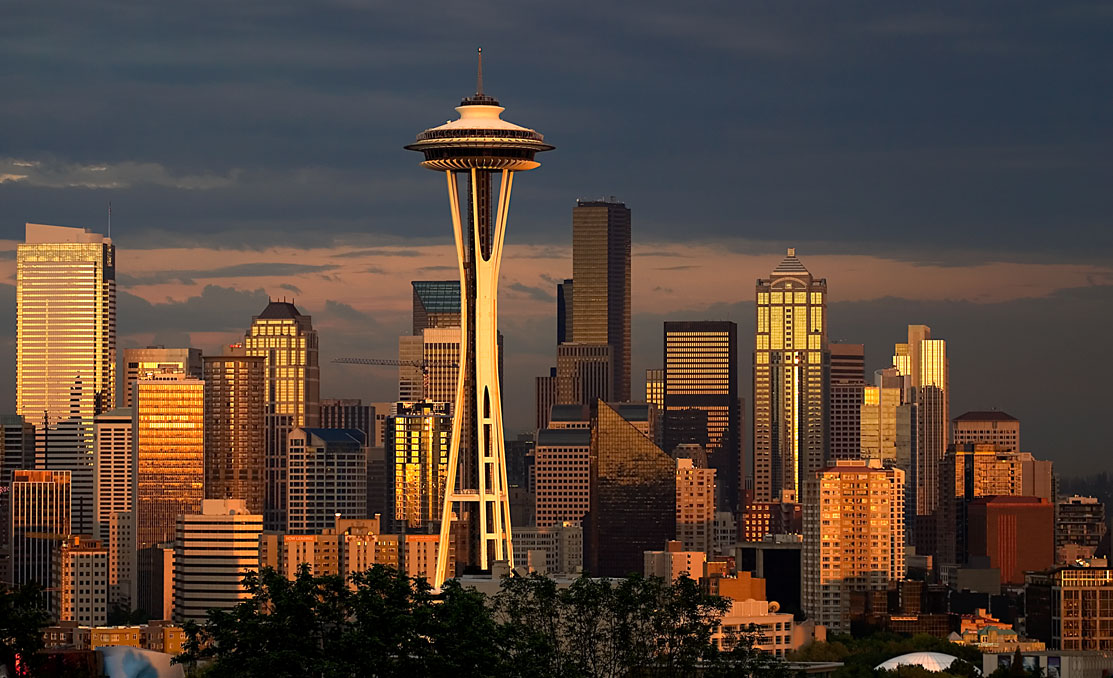 For years I’ve been intending to take some nice, cliche photos of the Seattle skyline, but I’ve never really gotten around to it.  With the unseasonably warm, clear weather that we’ve been having this week, though, I couldn’t pass up the opportunity, so I packed up my tripod and backpack and headed to Kerry Park on Queen Anne Hill.

I arrived around 7:30, a good hour and a half before sunset this time of year, but a crowd was already gathering, mostly couples and groups of teenagers with nothing better to do than hang around for a couple of hours and enjoy the view. The late afternoon sun was just beginning to take on its typical golden color, but I also noticed that clouds were looming in the south; the outline of Mt. Rainier was just visible.

The combination of the setting sun and the invading clouds made for very quick and dramatic changes in light quality. First, the cloudy sky behind the city fell into soft shadow, creating a little contrast between the buildings and their backdrop, which was nice, but not as dramatic as storm clouds would have been. Briefly, the moon (waxing gibbous) was visible in the sky above the Space Needle, but the clouds engulfed it a few minutes after I took the photo. Before long, the whole city was in shadow.

Surprisingly enough, people were still arriving. When I looked up from my camera, I found that there were two other photographers with tripods set up, and dozens of others with cameras and phones out to get snapshots.  I sat and listened for a while to a graphic designer from Colorado ramble about his bouts with depression and the corporate workplace to a pretty young woman who hung on his every word as though he were recounting tales of hand to hand combat with Somalian pirates. A cyclist paused on a bench and talked on his cell phone about his upcoming hiking date with a woman from work. Neither of them seemed to care that half of the park could hear them. Perhaps they just thought that nobody was paying attention.

For a while, not much happened… everything just started getting darker. Then, the setting sun got low enough that the western sky started to take on a yellow glow, which was reflected in the shiny buildings and picked up by the lightest surfaces. I kept hoping that Mt. Rainier or the moon would suddenly appear through the clouds, but no luck this time.

Then very quickly, the light started shifting and changing.  It seemed that the clouds in the south were getting darker, but with every passing minute, the color of the light shifted from pale yellow to golden yellow, and then to orange.  At the same time, the wind started picking up, and I felt a few raindrops on my bare arms and legs. For a moment, I packed up my camera, expecting a downpour that would drench my equipment… but after watching the light change for a minute longer,  I decided that the colors were worth sticking it out for a while longer.

Because the light was changing so quickly, I started bracketing my exposures, 1/2 f-stop over and under for each shot. My camera was tripod mounted and I was using a cable release, but I find that several of my images are still not sharp.  I wasn’t using mirror lock up, which may be part of the problem, but I suspect that the majority of the issue was with the wind. If any of you are curious, I was shooting at ISO 100 with a Nikon D80. I rarely shoot above 100 in natural light with the D80 because I tend to get more noise than I like with higher ISOs, although I do bump it up to 200 if I need an extra stop now and then. Since I was shooting in RAW mode, I left the color balance set to automatic, and corrected them in Camera Raw so that they’d be consistent with each other.

The photo below was taken just a few minutes after the photo above it. After turning bright orange, the picked up a rusty hue, and then a more rosey one.

As the sun got lower, only the tops of the buildings picked up any light.  Then the rain in the sky was picked up by the last rays of the sun and a faint rainbow appeared. I’m still working on the digital negative to see if I can bring it out…. I’ll post it if I ever manage it.  And then, of course, the light disappeared completely, and lights of the city came up.

Update: Below is the missing photo with the rainbow. By the time I got this shot off, most of the rainbow had disappeared, so no amount of (legitimate) processing will bring out any more color. There’s a vertical photo that does have a bit more rainbow, but I like the composition of this one better.