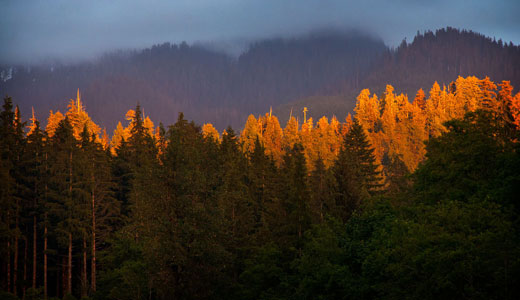 An Evening on the Mountain Loop Highway, Washington

I was a little restless after dinner last evening, having had to delay a long photography trip because of a few different projects that have come up. I could see that the clouds were still dark and heavy over the mountain to the east, but to the west, the sky was clearing, which is a recipe for dramatic evening light. The only question was where to go. Since it was already nearly 7pm, and I knew that sunset would be around 9, my options were limited. I decided to make the drive past Granite Falls and up the Mountain Loop Highway to see what I could find along the way.

As I approached the Verlot Ranger Station, and the trailheads for Mt. Pilchuck, Lake 22, and Heather Lake, it was already clear that I’d made a bit of a mistake. I was in the shadow of the mountain, and would therefore miss the light… and the clouds were still heavy. So I kept moving, heading up towards the Big Four and Ice Caves. Then, it started raining. Rain can be very peaceful, though, especially if you can keep your camera out of it. The rain was light enough that I could stop under large trees and remain completely dry, but the mist defined very pretty layers of trees and rocky crags. I set up my tripod and took a few shots, and then decided to get out of the weather. 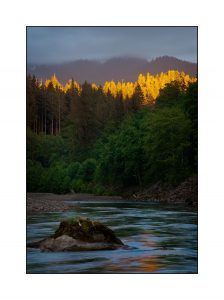 At that point, it was already almost 8:30, and there were no signs of the sun breaking through, so I decided to head back to lower elevations. About 5 miles back, the sky was already lighter, and after a couple more miles, the road was dry. It hadn’t been raining. And then, I saw the first rays of golden light burst under the clouds in the west. I looked for a place to pull my car over, grabbed my camera, and slid down the bank of the river onto a big snag of trees and branches in the river. In the time that it took me to get from my car to the edge of the river, the sun had disappeared from most of the nearby treetops, and I knew that  I only had another minute or two of good light. I stopped where I was and set up the tripod, and started shooting.

The semi-floating logs turned out not to be the most stable platform, and unfortunately, the sunlit highlights of my first few photos were blown out. In the few seconds that it took to correct the exposure, I had already missed the best shots, but I kept working for a few more minutes, and came up with a couple of pretty, if less dramatic shots.  But now that I know the spot, all I have to do is watch for the right conditions and head back with a little bit of time to make preparations, and probably, I’ll use auto-bracketing next time. 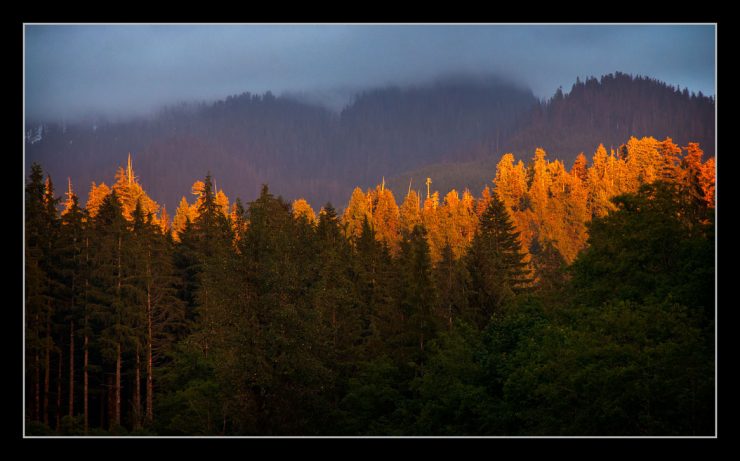