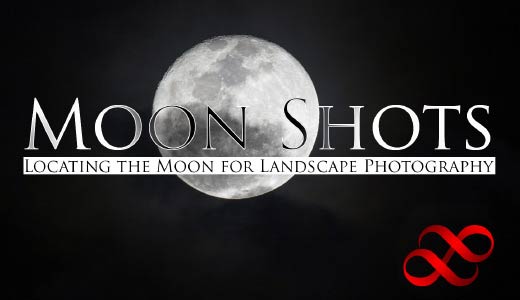 The Moon in Landscape Photography

Photographing the moon, by itself, is pretty simple; all you need is a good telephoto lens, a tripod, and the desire to do so. Photographing the moon as it rises or sets, as part of a landscape, is a little more tricky. However, with the help of a free program called “The Photographer’s Ephemeris“, the task is much easier than it has ever been. The program allows you to determine exactly where and when the moon will rise on any day, and where the sun and moon will be at any time during that day.

I’ve explained the basics of using the program in the video above, but there are a couple of further considerations to keep in mind when photographing the moon.

There are a few advantages to photographing the moon, as part of a landscape, around sunrise or sunset. One of the obvious advantages is that those are the times when the light on the landscape is usually the most attractive. Slightly less obvious, though, is that there’s a much greater dynamic range between the moon and the landscape more than a half hour or so after sunset, and it becomes very difficult to hold any amount of detail in the moon (if you expose for the landscape) or the landscape (if you expose for the moon). During the day, the opposite issue is the problem; the moon simply isn’t very dramatic in the sky. Shooting around sunset is a good happy medium.

It’s also handy to keep in mind a couple of simple facts about the moon and it’s relationship to the sun. As a general rule, a full moon rises at sunset.  Similarly, a new moon (ie, no moon) rises at sunrise [in the real world, these events converge and diverge depending on geography and time of year, which is why it’s so helpful to have something like TPE to figure out the details]. If the moon is half-full (first quarter moon), the moon will rise about 6 hours after the sun, or if it’s half full but waning (3rd quarter moon), it rises about 6 hours after sunset. Since the moon has a 28 day cycle, and our days are 24 hours long, the rule of thumb is that the moon will rise about 1 hour later each day… so if the full moon rises at 6:00 PM, the next day, it will rise a little before 7:00 PM.

Get the Program Here:

For Mac or PC: http://www.photoephemeris.com