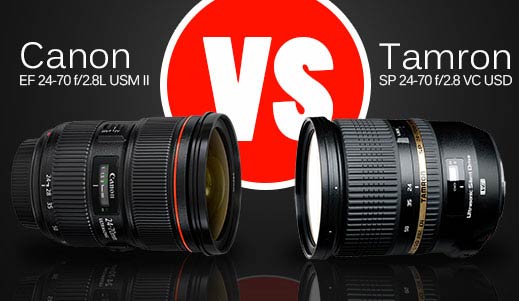 The Comparison: Canon vs Tamron

Canon’s EF 24-70 f/2.8L II USM has been hailed as the sharpest lens of its type, but it has no image-stabilization, and it carries a hefty price tag at $2049. On the other hand, Tamron’s new 24-70 f/2.8 VC USD does have image stabilization, but the company’s optics only occasionally match the standards found in OEM lenses. Both are well built, with weather sealing and fast, quiet focusing motors.

There are only so many resolution charts that I can look at. I was curious how these lenses would compare in actual use, not in the laboratory, so I got both of them and took some test shots to compare them.  The results are presented in the video above, but can be summarized as follows:

It should be noted, in fact, that the differences between these lenses will not be significant for many people. If you publish your images on the web, for display at 1080p or smaller, no differences will be visible unless you crop the images heavily. After all, even full HD resolution is only 2 megapixels, a 90% reduction in size from the RAW files.  Even mid-sized prints, such as 8x10s, will not show the differences in the lenses in most circumstances.

You can download the RAW files from the video comparison images below. These are all in RAW format, so to view them, you’ll need software to render them, like Adobe Lightroom or Photoshop CS6. In each case, I’ve bundled the files together in .zip archives for ease of downloading. Please read the information regarding copyright and usage that has been enclosed in each .zip.

After shooting tripod-mounted shots for a couple of days, it seemed only fair to let the Tamron’s VC system do some work, so early one morning, I went up to Camano Island to take some (moderately) low-light test shots. I found that I was able to get satisfactory results at 24mm at shutterspeeds of about 1/8th sec, but only rarely at 1/4 sec, and at 70mm, it was about the same, despite the focal length difference… though sharpness at 1/8th was not as reliable. Either way, I was able to take shots that I would not have bothered attempting with the Canon. Here are a few images from that morning, all taken with the Tamron, hand-held. Some sharpening has been applied, and of course, they’ve been re-sized:

I recommend using the “View Full Size” option when checking out these pictures; the resizing in the gallery system introduces quite a bit of blur. All of the images above were shot at f/5.6, with shutterspeeds ranging from 1/8th to 1/200th seconds. Sorry, I’m not making the RAW files of these images available for download.

I didn’t cover vignetting in the video for this lens because there doesn’t appear to be a very significant difference; both lenses display some vignetting at f/2.8, but it tapers off quickly by f/5.6.

In the examples below, both lenses were used to shoot the scene at 24mm, f/2.8 and f/8.  As usual, I did not apply any lens corrections here.

As you can see, both lenses produce some heavy vignetting wide open, but it’s not obvious to me that one is significantly worse than the other. The same was true at the 70mm end of the zoom.

Beyond the obvious questions of which lens is sharper, there are a couple of important considerations when deciding whether to choose the Tamron 24-70 f/2.8 VC USD or the Canon 24-70 f/2.8L II.

If you’ve found this comparison useful, please consider purchasing the lenses though the Amazon links below, or from Adorama Photo. This will help L&M create more (and better) comparisons in the future.