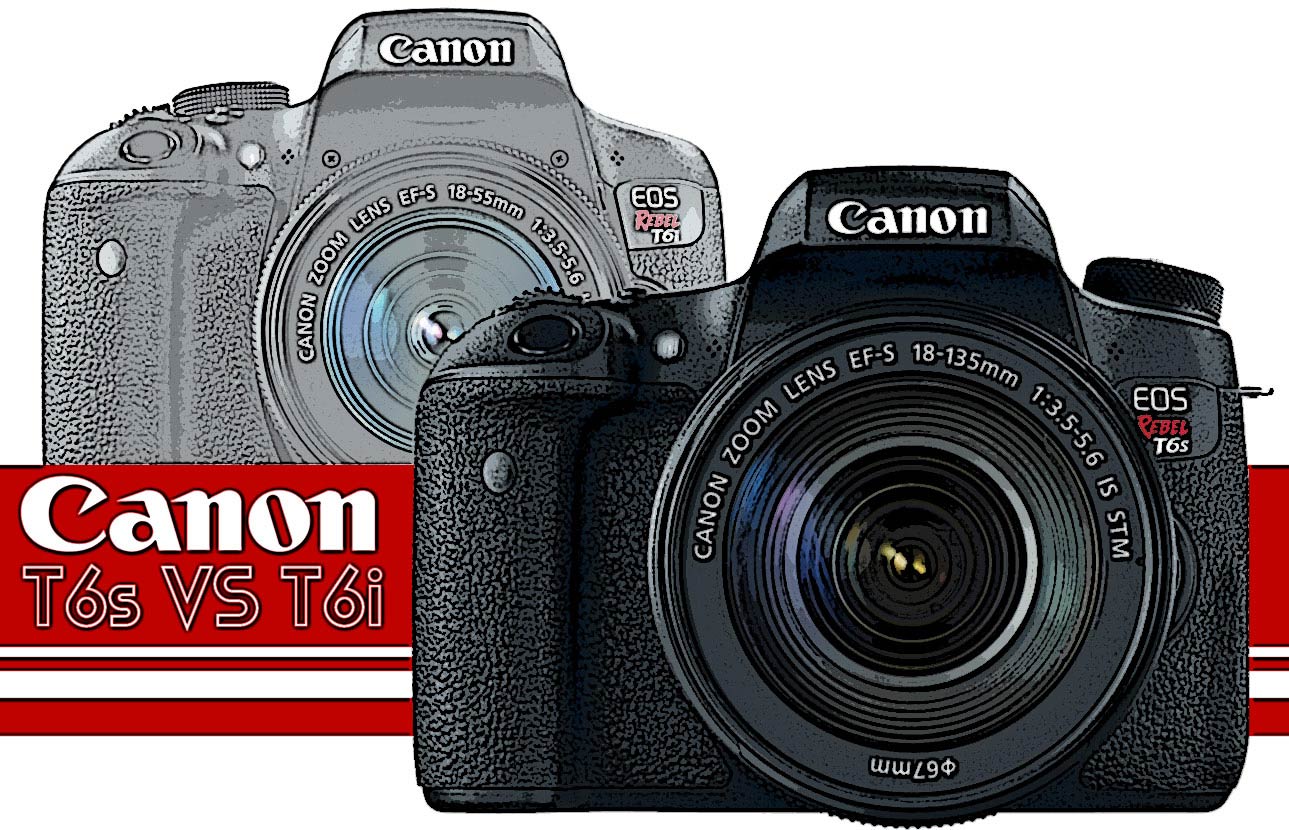 Canon T6i vs T6s: Which is Right for You?

The Canon T6s costs about $100 more than the T6i. Why is that? Will it produce better pictures? To answer these questions, start by taking a look at the chart of differences between the cameras below:

The cameras are otherwise identical. They use the same processor and sensor, so with the same settings, there will be no difference in image quality between the T6i and T6s. But that doesn’t mean that the differences listed above aren’t important.

There are two major differences in the camera bodies of the T6i and T6s. The first is the top-mounted LCD panel on the T6s, which is absent on the T6i.

The LCD provides all of the basic exposure information at a glance: shutterspeed, aperture, ISO, and exposure compensation, as well as the battery and memory card levels. For those who are interested in controlling their photography, knowing these things is critical and having it constantly available can save you from shooting with the wrong settings (especially if you’re not shooting in a fully automatic mode). However, if you’re more interested in letting the camera’s technology take care of the details and you’re happy to usually use the camera as a point-and-shoot, then this LCD will be wasted (the same information is also available on the rear LCD with the press of a button if you want it).

If you don’t know how aperture, shutterspeed, and ISO affect your pictures but would like to, I recommend taking 5 minutes to watch my video on the subject, here: The Three Basics of Photography.

The second main difference between these camera bodies is the control dial on the back of the camera.

For example, this is very important if you’re taking a picture of a person against a bright background. Despite the sophisticated metering systems found in modern cameras, they will still often under-expose in situations like this, leaving the person in muddy shadow or even full silhouette (though the bright background will be exposed correctly). Of course, this can be fixed with fill flash if you want to use artificial light, but if you don’t you can simply add +1 or +2 stops of exposure compensation to brighten them up.

This is possible with both cameras, but with the T6s, it can be done with the thumb on the rear control dial without even removing your eye from the viewfinder, and it’s quick and easy to set it back to normal. With the T6i, you’ll need to press the +/- button on the back of the camera and then make the adjustment on the rear LCD (or in the viewfinder) using the main command dial. It’s not exactly difficult, but it’s nowhere near as quick and easy as the process on the T6s.

This is a feature that is used by a very small percentage of camera owners, but most professionals and many advanced amateurs. If you think you’re going to be interested enough in photography to learn how to use it, great! It can be very useful. If not, then there’s no point in paying for it.

It’s also worth mentioning that the T6s has a sensor that turns off the rear LCD when the camera is brought to your eye for shooting through the viewfinder. The shooting mode dial also has a locking mechanism, which is a new feature to the Rebel line.

Incidentally, Canon’s description of the T6s also says it “can shoot incredibly quickly in Live View mode with Servo Burst Shooting.” However, the T6s manual makes no mention of the term “Servo Burst“, so how this might differ from the T6i remains a mystery.

In addition to the body differences between the T6i and T6s, there’s one significant difference in functionality: the T6s can shoot HDR video. HDR stands for “High Dynamic Range”, referring to a scene has a dramatic difference in luminance between the brightest areas and the darkest areas. The purpose of HDR video is to lower the contrast and capture more detail in scenes with high dynamic range rather than allowing highlights to be blown out or shadows to go completely black.

However, this mode has some limitations. For American users who will be using the NTSC format, HDR video can only be shot at 1280 x 720 at 30 fps. For PAL format shooters, only 25 fps is available. Either way, full HD (1080p) resolution is not possible.  This is almost certainly because the camera will be shooting at double that frame rate (60 fps or 50 fps, respectively) but with alternating frame exposure. The first frame would be exposed normally and the second would be under-exposed, and then those frames would be combined into a single frame to pull as much detail as possible from the scene and creating a video with half the original frame rate. This explains how the cameras can shoot 30fps video at 720p (normally only 60fps is available at that resolution), and it also explains why it’s not possible at 1080p (since 60 fps is not possible at that resolution for either camera).

This has the potential to be a very useful feature for users who shoot a lot of video. However, it should be noted that this type of functionality can be added to many Canon cameras by using the free Magic Lantern firmware side-car.

Again, if you’re just looking for a good camera, buy the T6i, but if you’re interested in photography, buy the T6s. The lone exception would be for those of you who are not that into photography but shoot a lot of video and would find a limited capability for shooting HDR video helpful. The differences between the two cameras are minor enough that this should be a relatively easy decision to make. I’d go for the T6s for the top LCD alone.

If you’re ready to buy a new camera now, think about buying it through one of my links here at Amazon.com. It won’t cost you any extra, but it will be a big help to me.