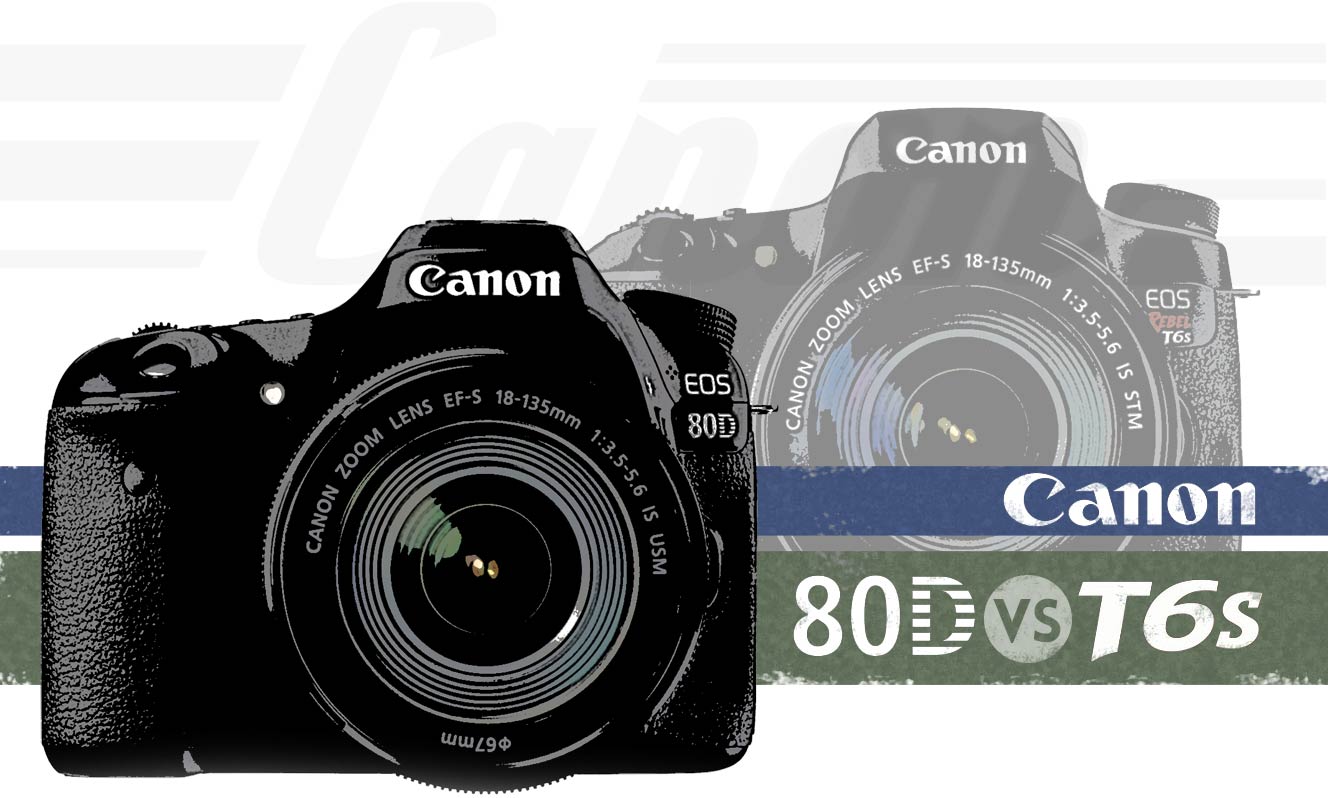 With the Rebel T6s, Canon gave their entry-level line of cameras some of the most important features that used to separate them from the mid-line series, so you may wonder whether it’s really necessary to buy the new Canon 80D. In fact, my general advice to camera buyers is always this: buy the least expensive camera that will meet your needs, and the best lenses you can afford. So, should you buy the Canon 80D? The answer is maybe, depending on your needs: the 80D does still have some significant advantages over the T6s. To figure out whether they’ll be useful for you, though, keep reading below.

Before we look at the details in depth, here’s a quick overview of the cameras’ main stats.

Don’t expect any difference in image quality. Both cameras are endowed with a 24.2 megapixel sensor, and although the sensors are not exactly the same (their live-view AF systems are ostensibly different), they produce identical image sharpness and their low-light performance is the same. Although the 80D has a nominally higher native ISO range (about 1/3rd of a stop), it appears that this difference is based on slightly improved noise-reduction for JPGs; RAW shooters will get the same performance from both. And if you really care about image quality, you’ll shoot RAW.

Again, when it comes to image quality, it’s a tie.

For Photos: For both still photography and video, the Canon 80D has a better autofocus systems than the T6s, at least on paper. The 80D has more than twice as many autofocus points as the T6s (and the 70D, for that matter), and they’re all cross-type. If you don’t know the difference between cross-type and standard AF points, watch the first two minutes of my quick video on autofocus, here. Not only that, the camera can focus in much lower light levels than the T6s: -3 EV rather than the T6s’s -0.5 (a change of +1EV represents twice as much light).

That said, the T6s’s autofocus system first appeared in the original Canon 7D, a truly excellent, semi-pro sports and action camera. The fact that there’s something better doesn’t mean that you’d have any problem shooting fast action with the T6s’ excellent AF system.

For Video: Like the 70D’s, the Canon 80D’s sensor has built-in phase-detection functionality within the normal capture pixels on the sensor, allowing it to focus quickly and accurately while shooting video or while using live-view mode… essentially just as fast as when looking through the viewfinder.

Because of the dual-pixel CMOS focusing system, the Canon makes the ONLY DSLRs in which live-view can be a truly useful tool for shooting action with the camera held overhead or below eye-level (although non-DSLRs such as mirrorless cameras also have this functionality). It is also the first viable DSLR alternative to a video-camera for shooting high quality HD footage with autofocus. Because of it’s speed and accuracy, functions such as face-tracking also become especially useful, especially for those who are vloggers or otherwise shooting video of themselves and can’t be on both sides of the camera at once.

The T6i and T6s do not use the same dual-pixel autofocus technology used in the 70D, but they use an advanced version of the hybrid phase-detect system found in the T5i, and while the AF system of the T5i was still significantly slower than that of the 70D, the T6s has made great strides and is now very similar; in most situations it will focus just as fast as the 80D. I’ve been very impressed. In situations with low contrast, however, it can hunt a little more frequently than the 80D.

The Canon 80D outperforms the T6s in many speed-related categories. The 70D has a faster top shutter speed (1/8000th vs 1/4000th) and shoots more frames per second (7 fps vs. 5fps) than the T6i, and the 80D can sustain those shooting speeds much longer. While the T6s’s buffer will be full after shooting 7 RAW images, the 80D can shoot a full 25 of them in a row. However, if you’re shooting JPGs, the 80D’s faster frame rate will mean that its buffer will fill after 110 shots (15.7 seconds of holding the button down) while the T6s shoots them just slow enough that there’s no practical limit…. you can just keep shooting hundreds of images.

The shutter lag of the T6s is much improved over previous Rebel models, ranging from about 75-100ms, depending on focus mode… twice as fast as previous models. The 80D is still slightly faster, at around 60-75ms, but the difference is now insignificant.

Both cameras are now equipped with anti-flicker mode, allowing you to get consistently lit shots in situations with problematic, pulsed lighting. If you enable anti-flicker shooting, though, the shutter lag will increase and the overall frame rate will slow down as well.

Personal preference plays a major role in determining which body size and style will be preferable for you. Some people prefer a heavier, larger body, and some people (hikers, for example) prefer something more lightweight and compact, and there is a significant difference between these two bodies. The T6s is clearly the lighter (about 23%) and smaller of the two. It’s also worth noting that, a result of the compact size and smaller power-source, you should expect to get about half as many shots from a single battery. Keep in mind that if you prefer the T6s but have large hands, you can increase the size by adding a battery-grip such as Canon’s BG-E18 which will allow you to double the camera’s battery life as well. 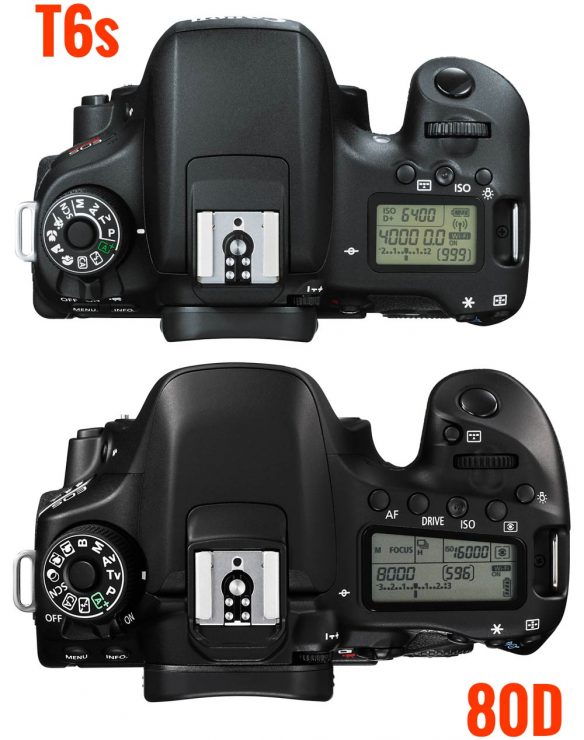 The Canon T6s has two body features that separate it from the T6i and put it in the realm of more professional level cameras. The most obvious is probably the top mounted LCD panel (above). The most useful for advanced photographers is probably the control wheel on the back of the camera which allows quick access to exposure compensation (making your picture brighter or darker). This is a must for any photographer shooting events in rapidly changing light (and one of the reasons that I started shooting with Canon cameras over 20 years ago). I don’t find the T6s’s as easy and comfortable to use as the 80D’s, but at least it’s there.

It’s also worth mentioning that the Canon 80D features standard dust and weather sealing, while the T6s does not. If you often shoot photos in harsh conditions, this can make a difference. Keep in mind, though, that most lenses are not weather sealed, so you’ll still want to stay out of the rain most of the time.

Conclusions: Which Should You Buy?

The Canon Rebel T6s is a feature-rich SLR that performs as well as mid-level or semi-pro SLRs from just a few years ago. If you’re interested in taking better pictures, it is probably the best place to start.

Both cameras are excellent for shooting landscapes, travel photos, and portraits. The T6s is a great option for shooting casual action (kids playing, events, etc) but is not as strong as the 80D for heavy action shooting (school sports, professional weddings, etc) because of its smaller buffer and slower frame rate.

So, there are some good reasons to consider the Canon 80D, mostly involving action and video. This is how I’d make the choice:

Buy the Canon T6s if:

A Note About Lenses

If you’re looking for a good all-around, flexible lens, both cameras are available in a kit with an 18-135mm lens: the T6s with the STM model, and the 80D with the new power-zoom USM model, and I highly recommend both of them. Optically, they’re great. The wide-angle end of the zoom is great for those times when you need to capture a larger area from up close or emphasize a foreground object, and the telephoto end is just powerful enough to shoot some sports, and it’s a great length for portraits. If you need a lens that performs well in low-light situations, Canon’s  50mm f/1.8 STM lets in much more light (10 times more than the 135mm f/5.6), and the f/1.8 lens only costs about $125, and it’s a wonderful portrait lens.

If you’re looking for the best option for low-light, moderately wide-angle photography, there’s nothing better than the Sigma 18-35mm f/1.8 ART lens: the optics are incredible, and Sigma makes the only f/1.8 zoom lenses in the world. Similarly, their new 50-100mm f/1.8 is a great compliment to it: it’s the fastest (ie, lets in the most light) telephoto zoom lens in the world, and the optics are similarly excellent. Neither are cheap, though.

In this post, I’ve attempted to highlight the most important differences between these two cameras, but there are many more than I can discuss in an article like this. If you still have questions, or would like further guidance, please let me know in the comments section below, and I’ll answer you as quickly as soon as I get a chance. Please comment!

When making an investment in expensive equipment, it pays to deal with a reputable dealer so that you get the benefit of a good exchange policy and you don’t run the risk of getting counterfeit or refurbished goods (which is more common than you might think). Luckily, they also tend to have the best prices. We recommend using Amazon.com, and buying through our links here will help support this site.