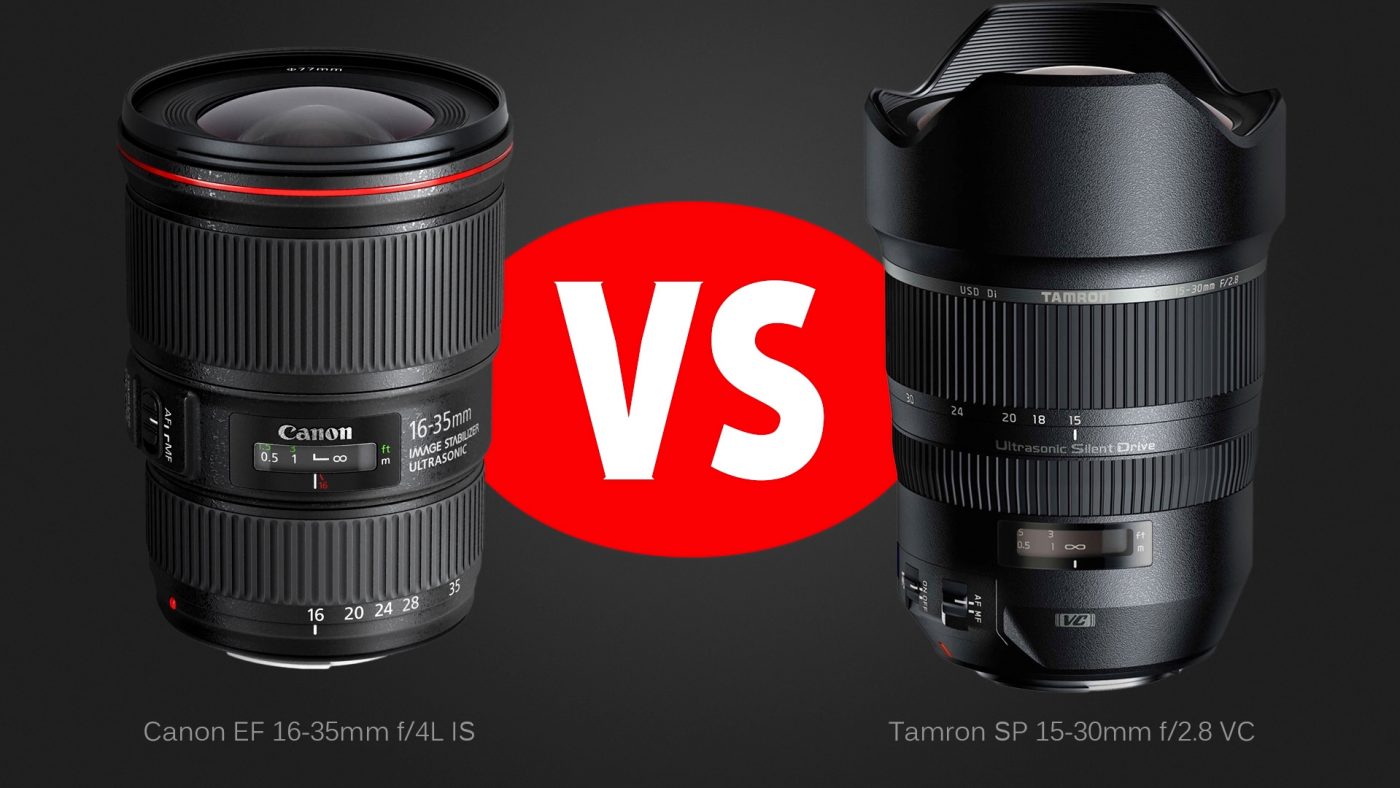 Those of you who follow my lens reviews may already know that this comparison of the Tamron 15-30mm f/2.8 VC and the Canon 16-35mm f/4L IS has been in the works for a year already. Because of the different focal length ranges and maximum apertures, getting comparable images was difficult. I started shooting for it in July of 2015, and finished in late winter of 2016. I used two different Canon 16-35 f/4L IS lenses during that time, but they gave me consistent results.

Regardless, the two lenses remain similarly priced, with the Tamron priced around $1200 and the Canon now down to just under $1000 (while the old f/2.8 II model without image stabilization costs $1500) and would be my top two choices for Canon at this focal length range.

Both lenses are sturdy and well built, with smooth, well dampened rings and weather sealing. The Tamron was apparently impressive enough that Pentax licensed it and released it under their own brand name for their new weather-sealed full-frame cameras.

There are a few important differences, though. First, the Tamron’s zoom and focus ring positions are switched with those on the Canon: the Canon’s zoom ring is nearest to the body and the focus ring closer to the end of the lens, while the Tamron’s zoom ring is closer to the end of the lens. Additionally, the operation of the zoom ring is reversed on the Tamron: turning it towards the right zooms in, while turning the Canon to the left zooms in. Neither of these is a problem, but it can take a little time to get used to.

More importantly, the Tamron requires larger glass elements to achieve it’s f/2.8 aperture rating and is consequently much heavier than the Canon… almost twice as heavy, in fact. The Canon weighs 615g, while the Tamron plods in at 1100g.

Finally, the Tamron has a permanently attached front lens hood which protects its large, protruding front element. This front element design doesn’t just increase the risk of flare (which I’ll discuss later), it also means that there are no filter threads on the end of the lens, so using polarizers or neutral density filters is not possible without a pricey adapter that fits over the end of the lens hood.

At f/5.6, though, the Canon sharpened up and either matched or took a slight lead away from the center, and consistently performed better at the borders of the frame.

By f/8, the Tamron nearly caught up again across the frame, though the Canon remained slightly more contrasty. Beyond f/8, differences were not perceptible.

Like the Tokina 16-28 f/2.8 (and the Nikon 14-24 f/2.8, for that matter), the Tamron 15-30 f/2.8 VC USD has a protruding front lens element, making it very susceptible to flare. In many cases where the sun (or other light source) was sigificantly outside of the frame, the lens hood was not able to protect the front element from catching stray light, and I saw heavy flaring artifacts. In the same situation, the Canon produced no flare.

Neither lens produced very strong vignetting for me. At the 30/35mm ends of the zooms, vignetting was minimal– perhaps a half a stop loss in the corners wide open, and nothing noticeable otherwise. At the near end of the zoom, though, vignetting is a bit heavier, reducing exposure by at least a full stop and a half in the corners wide open (perhaps two stops at the edge of the frame), and still around a half stop of loss when both lenses are closed down one stop, which is visible but not troubling.

We are very lucky to have such excellent lenses to choose from these days, and these two are no exception: both are sharp, well built, and perform very well all around. Based on my findings, though, this is what I would recommend:

Buy the Canon if:

Buy the Tamron if:

As I’ve mentioned in the video, purchasing either of these lenses from any one of the most respected distributors listed above will help support this site and YouTube channel and allow me to make more videos, more frequently… and it won’t cost you any extra. Thanks for the support!

This comparison is based on my own experience with no more than two samples of each of these lenses. It’s always possible that my experience is not typical. Have you had a different experience? Let me know in the comments below.

Just have general questions? Again, feel free to ask in the comment section below.