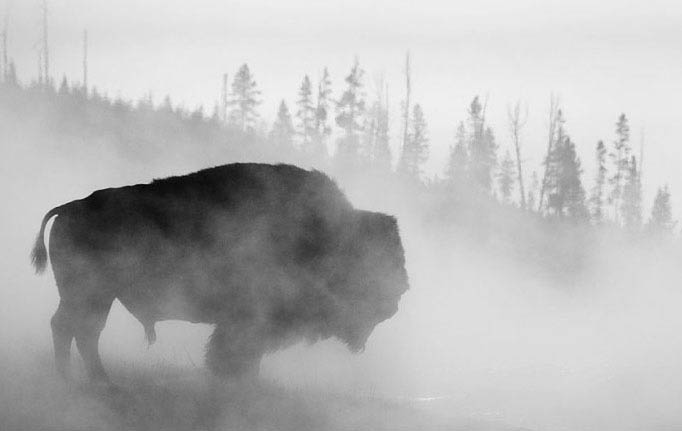 Did This Painter Steal My Photo?

In my newsfeed this morning on facebook, I saw a striking image. It was a painting of a bison and a boy by Indonesian artist Elicia Edijanto, who is currently exhibiting work in Orlando, according to Colossal.com. It was a good painting, but that’s not what was so striking about it: I realized that it appeared to be copied from my own photograph.

In October of 2010, I was driving through Yellowstone National Park, on my way home after a long road trip in Colorado and Utah, when I saw a bison walking towards the steam rolling off of the Grand Prismatic Spring. I stopped and took several photographs, including this one: 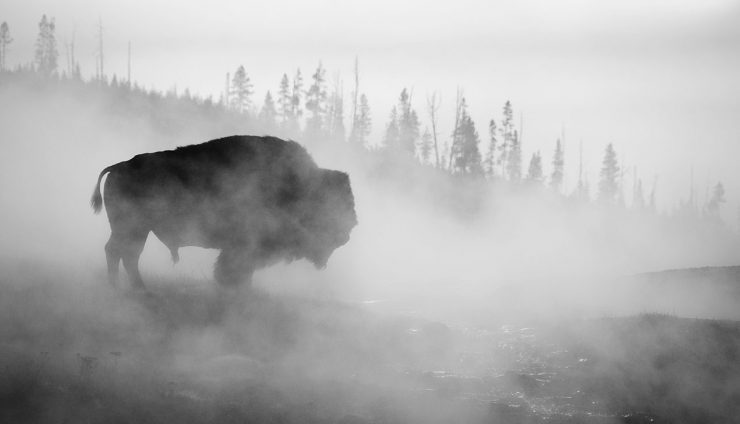 But after taking a moment to flip the painting over and resize them in Photoshop, the similarity seemed too strong for a coincidence. 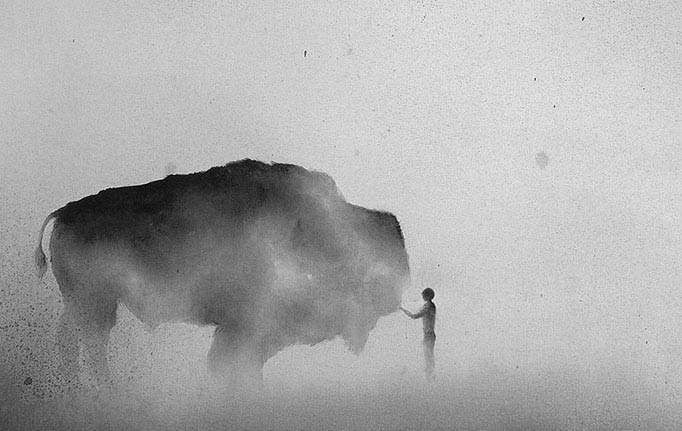 So, now the question is this: what do I do about it, if anything? I didn’t license the image to this person. Perhaps I’ll start by emailing the artist, before contacting my lawyer again.

What do you think? Is it a copy? And if so, is it acceptable?

A few people have made comments to the effect that 1) there are lots of bison pictures out there on the internet and 2) lots of them would overlay on the painting just as well as yours.

This is an understandable comment, at first. Bison do have a very iconic shape, so it’s easy to imagine that any single bison could just as easily replace another in a photograph. However, bison are animals, and like just about anything found in nature, no two of them are alike. Some of them are tall, some are stocky. Some are male, some female. Some are fat, some are muscular, some are thin. Some are old, some are young; some have big heads, some have long beards, etc. Most bison in the USA are actually “beefalo”, ie, they have cattle stock interbred, so some look more like domestic cattle. And of course, this is all in addition to how their bodies are positioned when photographed. The combination of all of those things (and more) mean that the outline of every bison is going to be very distinctive.

And this becomes more and more obvious when you actually attempt to overlay the shapes of random bison over the painting in question.  Take, for example, the image that Darleen posted in the comments below. This is what it looks like:

If we isolate just the shape of the bison, here’s what we get: 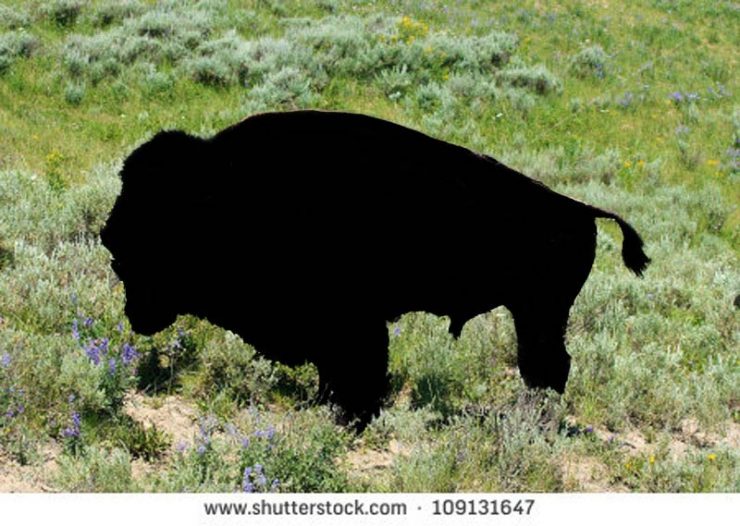 And then, if you turn that shape green (so that we can tell what’s what) and overlay it on top of the painting, you can see how similar they are. Not. I sized them so that they’re the same length from nose to tail, and the tops of the humps are very roughly lined up. 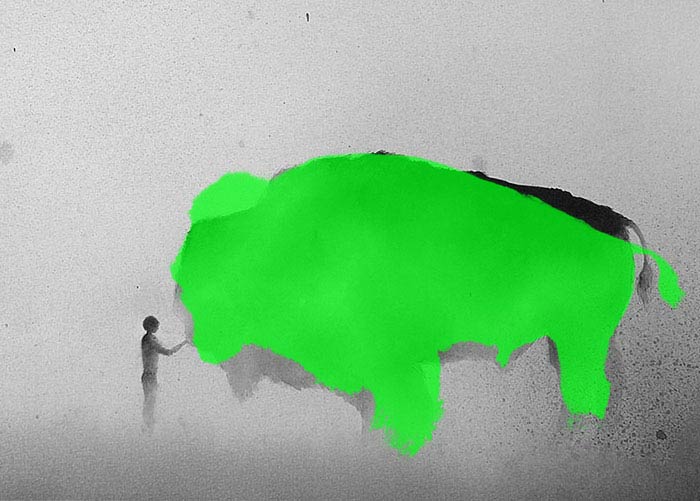 Nobody could ever suggest that the painting was copied from this bison. They’re just not that similar.

Now, perhaps you’re thinking, “Well, if that bison were photographed in the fall, when it’s fattened up for the winter… or it were standing differently… or it were older (or whatever), then it would be a close match! And an image like that is probably out there.”

Well, then I challenge you to find it. I have. It’s my photograph.

I also spent time some looking around the internet for bison pictures to see if I could find anything that was even close to matching my photo. This was the first one that I tried from my initial search: 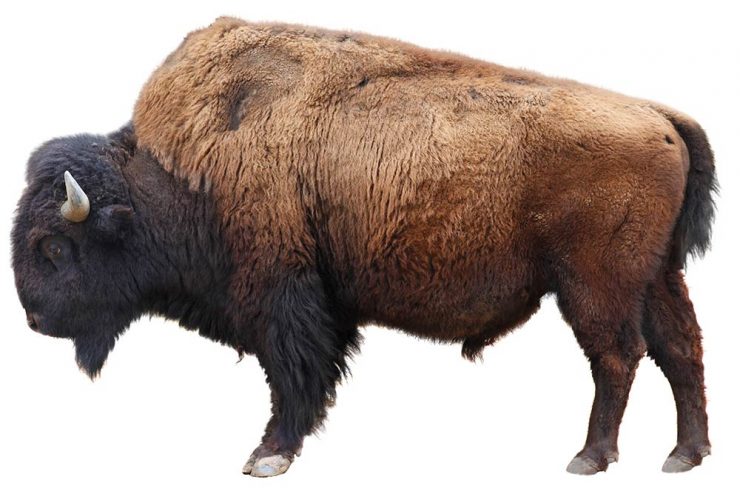 Then I put the outline over the painting, and… 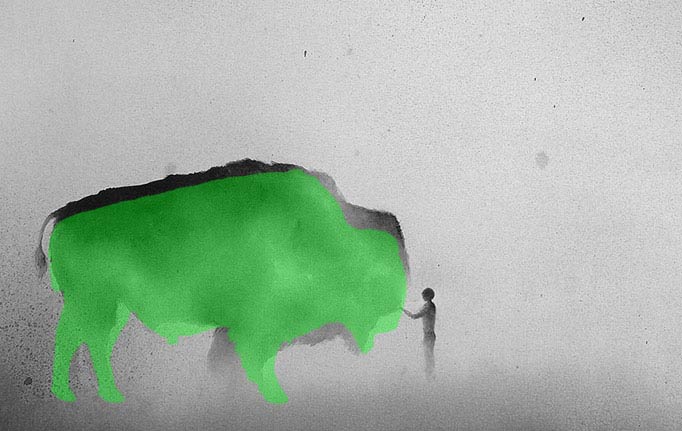 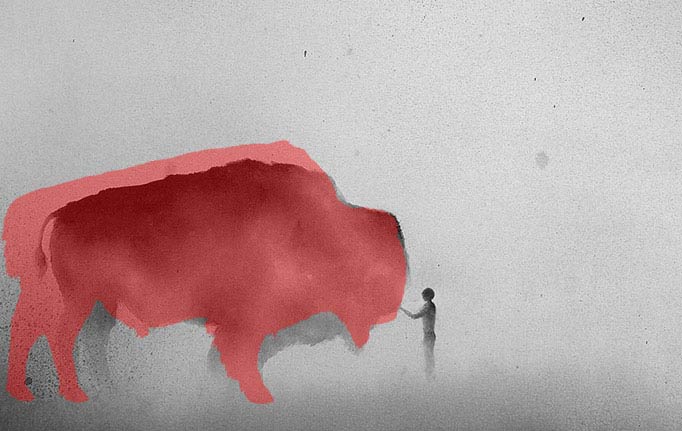 And these two images were not just flukes. I tried to find other images in which the bison was more like the one in my photograph, and the results were like the ones above. Yes, you can tell that all of them are bison, but none of them are the same bison, from the same picture.

Now, scroll back up and look once more at the comparison between my bison and the one in the painting.

When I originally contacted the painter, on the day that I discovered this, she emailed me back. She was miffed that I’d even suggested that she’s used my image without permission. If I were wrong, though, she could VERY easily have sent me a copy of the image that she had used as a reference. As unlikely as it is that she used the one image out there that also matches up perfectly with my photo and her painting, if she had produced her reference photo, I’d have apologized and moved on. Instead, she said:

I gather several bison photos from free-licensed web, turn them into silhouettes so that I can draw easier, and every bison look like a bison!

Indeed? Every bison? And these are the images she attached:

Now, even if I’m right, it that doesn’t mean that going to court would be a cakewalk. It would be expensive, and since the artist doesn’t even seem to be American, even if I won in court, the US courts may not be able to enforce a decision. For now, it’s enough for me that I know I’m right, and she knows I’m right… and she has to live with knowing that I know, and anyone else could find out at any time, for the rest of her career.