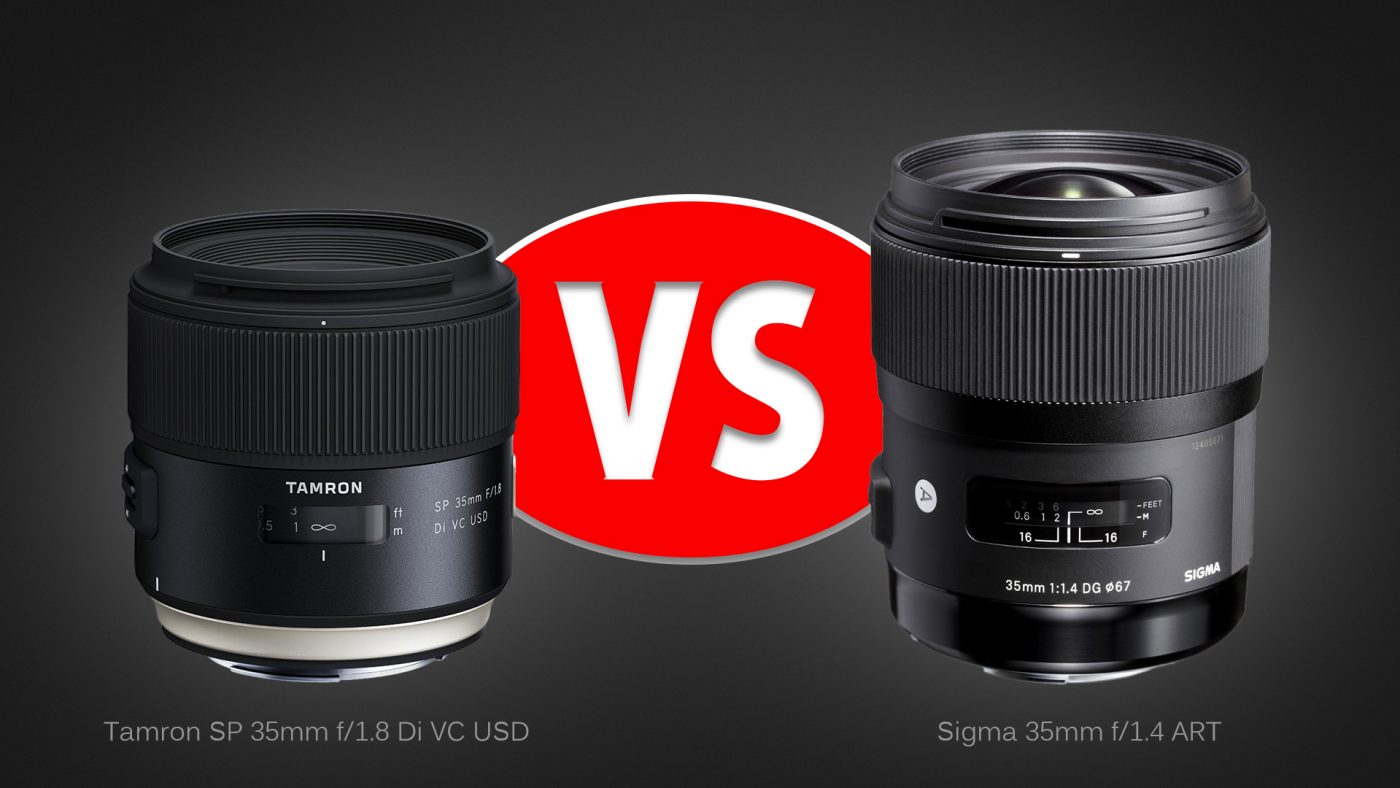 The Tamron 35mm f/1.8 Di VC USD was announced years after (and probably as a response to) Sigma’s ART series lens,  but it’s not a perfect answer to the lauded Sigma lens. Tamron did not match the Sigma’s large, f/1.4 aperture with their product, but they did add stabilization, which more than makes up for it in certain circumstances. Which one is better, ultimately? It probably depends on what you’re using it for, but I’ll cover some of the basics of the lenses below (and of course, in the video above).

Both lenses are nice and sturdy and feel solidly built, but I wouldn’t expect either to take the kind of beating that a Canon L lens would. However, unless you’re a war correspondent or are otherwise very hard on your gear, this shouldn’t be a concern. They’ll both stand up to regular use. The Tamron is weather sealed, so you can use it in the dust and rain without too much worry, while the Sigma is not sealed.

The Sigma is significantly heavier (roughly a half pound) and about a half-inch longer than the Tamron.

Both lenses are nice and sharp, though the Tamron requires some correction of its chromatic aberration to really shine. Without correction, the lenses are pretty equivalent in the center of the frame wide open, but the Tamron is sharper mid-frame and at the edge of the frame, and it continues to be sharper at the edge up until around f/2.8 or f/4, depending on the scene1 “Sharpness” is not the same thing as resolution, though the terms are sometimes sloppily used interchangeably (even by me), but think of “resolution” as the amount of data/detail that a lens captures (and how fine it is), while “sharpness” is a matter of how easy it is to see the edges of the detail that is captured. This is complicated by the fact that sharpness and resolution are interdependent, to some degree. I’ll stick with the term “sharpness” in this video, though in some cases, the Sigma was less sharp but had higher resolution.

In the center and mid-frame, the Sigma is sharper from f/2 until the lenses become so sharp that they’re indistinguishable, around f/4 or f/5.6, again depending on the contrast in the scene.

At f/5.6 or so, the lenses are both equivalent for all practical purposes, especially if the Tamron’s aberrations are corrected.

Both lenses have excellent autofocus capabilities, as long as you know what you’re doing. With any large aperture lens, hitting focus every time can take a little practice and certainly takes familiarity with your camera’s autofocus system.

Shooting action at a skate park with both of these lenses, I had no trouble tracking focus on skaters that were riding directly at me or changing speeds and direction frequently. As always, I did miss focus a few times with each lens, but no more than I’d expect from an equivalent Canon “L” lens.

Only the Tamron is stabilized in this comparison, so there was really no challenge. As I’ve mentioned before, the Tamron’s stabilization seems to be good for at least two stops, perhaps three, though it’s hard to test exactly. I was able to get passable results with the Tamron at shutterspeeds as low as 1/8 and 1/4 of a second, while 1/20th of a second was about the limit with the Sigma (all other things being equal).

Again, there’s not a whole lot unexpected here. The Sigma is smoother than the Tamron, wide open, and its bokeh is generally less contrasty and less jittery looking. The Tamron exhibits some “onion rings” in the bokeh highlights, but they’re not very pronounced.

At identical aperture settings, the Tamron and Sigma display nearly identical vignetting, which is unusual: I’d have expected the wide-open vignetting of the Tamron to be more similar to the Sigma’s. It appears that the Tamron shows a touch of darkening in the corners at f/2.8 while the Sigma does not, but at f/2, the Sigma’s darkening is just a bit more pronounced. At f/1.8, I can’t tell them apart.

Generally, both lenses are optically very strong, but where there’s a difference, the Sigma usually has slightly better resolution than the Tamron, though the Tamron is often a bit more contrasty and appears to be sharper. At large apertures, the Tamron is more likely to look better at the edge of the frame than the Sigma. The Tamron’s problem with chromatic aberration affects its color rendering and resolution, and needs to be corrected during post processing if you shoot RAW. Otherwise, both lenses are built well and perform well.