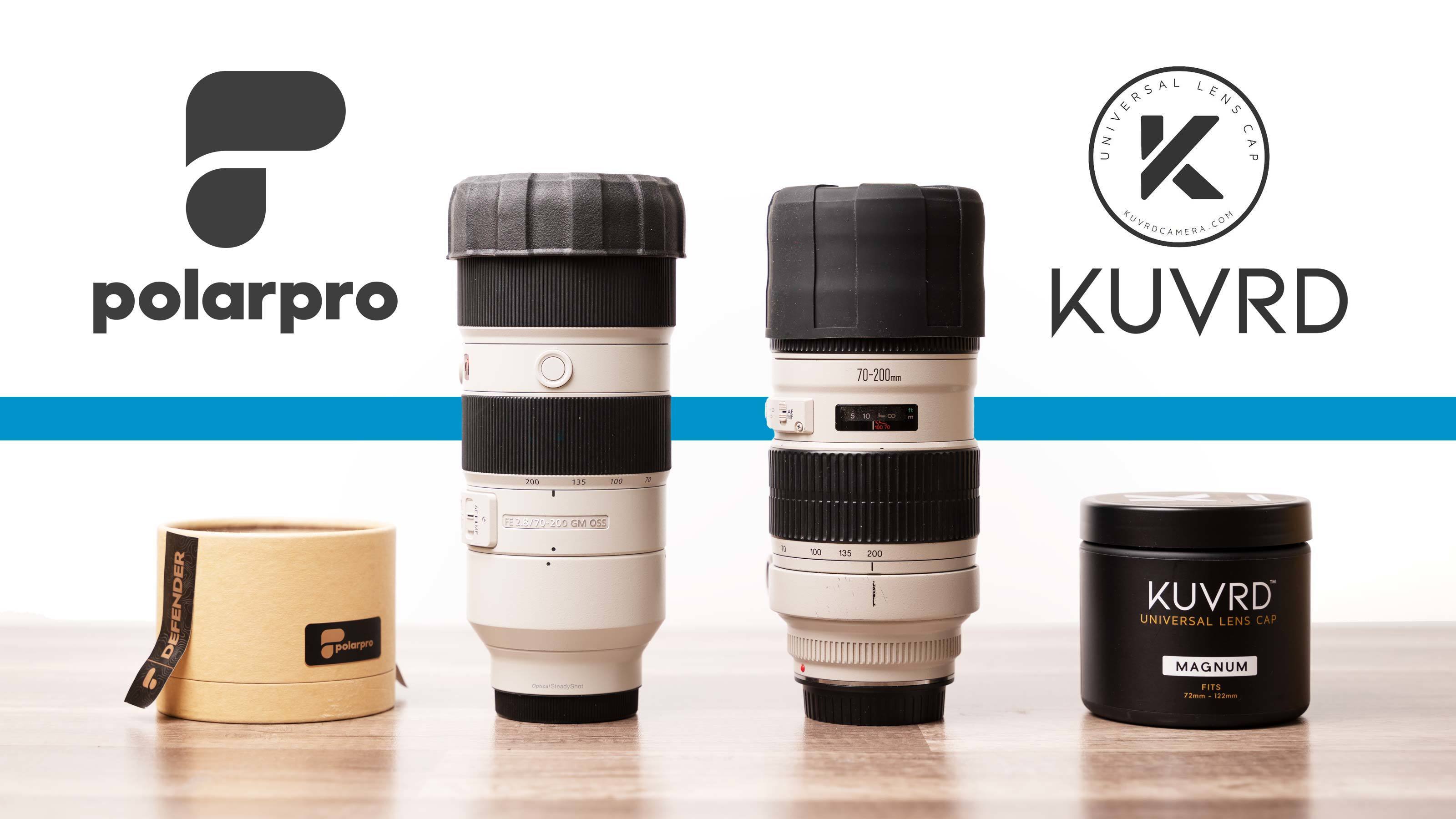 KUVRD vs PolarPro Defender: Which Lens Cap Is Better?

Many of us don’t give much thought to lens caps. When we use them at all, it’s the plastic pinch-caps that come with our lenses that go careening off at the slightest bump, forcing us to fish them out from under the parked cars where they inevitably roll. Some photographers skip them entirely and accept the risks of using a UV filter instead.

KUVRD and PolarPro give us a couple of additional options, though, and they’re worth considering. KUVRD produces two Universal Lens Caps, the Magnum and the Micro. The PolarPro Defender (see my “first impressions” here) comes in five sizes for lenses with threads ranging from 55mm up to 114mm. Both companies sent me units to test and review, so let’s take a look at how useful they each are.

When it comes down to it, the most important purpose of a lens cap is to protect the front element, and in this regard, they both work. The Defender is a harder, thicker rubber cap with a rigid-plastic front plate to protect the front element. The KUVRD cap, on the other hand, is a more flexible silicone cap that stretches around the end of the lens and creates an airtight, waterproof seal (as long as the lens barrel is smooth enough).

The PolarPro Defender, then, will provide better protection against bumps and drops, especially when it comes to anything that might poke into the optics. If you drop your lens on a jagged rock, the front element has a much better chance of surviving with the Defender (though similar protection would be offered by the KUVRD cap installed over the top of your stock lens cap.)

On the other hand, the Defender does not provide anything like a waterproof/dustproof seal. The ribbing on the interior of the cap (which make it easier to attach or remove) will definitely allow water or sand to penetrate and reach your front element. The KUVRD caps are much better in that regard. The deeper KUVRD caps also protect a larger portion of the lens barrel, though again, with a thinner layer of rubber.

Practicality & Ease of Use

When it comes to practicality, there are a few things to consider:

Since the PolarPro Defender is relatively rigid and sized for specific lens diameters, it’s easy to slide over the front of the lens with one hand, and it can just as easily be removed (though it’s not so easy that there’s any risk of the cap falling off). The KUVRD caps, on the other hand, are floppy silicone rubber, and deeper than the Defender. They’re designed to be stretched out and pulled onto a lens, and it’s generally a two-handed job (though peeling the thing off can generally be done with one hand).

However, once you get the cap off, it’s the KUVRD model that’s easier to deal with. Since the Defender is harder rubber and plastic, it’s bulkier. If I’m traveling and walking around a city with my lens cap on and stop to take a photo, I’ll usually stick my pinch-cap in my pocket and then shoot. But unless you have baggy clothes, the Defender is not going to fit in your pocket (at least, not comfortably); it’s just too big and grippy. I often found that I had to hold it in my off-camera hand while trying to support the lens at the same time, which is a hassle.

The thinner, floppy KUVRD cap can easily be stuffed into a pocket, and even if you hold it in your off-hand, its flexibility makes it much more comfortable.

When I mentioned this concern to the folks at PolarPro, they suggested that the Defender might be best for photographers who use it in their camera bag and then leave it behind when they take the camera out to shoot, and I can see how that would make sense for photographers who work that way1I’m also of the opinion that if you need such a beefy lens cap to protect your lenses while they’re in your camera bag, it might make more sense to invest in a new camera bag rather than a bunch of expensive lens caps.. I don’t.

I always use lens hoods2…although I hated the white hood on the Sony 70-200 f/2.8 GM so much that it took me a long time to start using it regularly., and this can pose a problem with lens caps. If you buy a Defender to use on a lens, you can’t fit it onto the lens hood while you’re out walking around with your camera, so again, you’ll need to leave it in your camera bag, or worse, buy a second, larger cap to fit onto your hood.

The KUVRD caps are much more flexible, and can stretch to fit over the ends of many hoods, either while the hood is attached to the lens for shooting or reversed for travel. While reaching down into a lens hood to remove or replace a pinch-cap can be annoying, pulling a KUVRD cap from the outside of a lens hood is pretty simple.

Most of the time I shoot Sony, now, but I also own Canon, Nikon and Pentax systems with a variety of lenses. Of course, I don’t carry most of it. I decide what I’m going to shoot, grab a few lenses and head out the door.

Luckily, this means that I wouldn’t really have to buy a dozen different specialty lens caps; I’ll only need as many as lenses I’m likely to carry at a time (three or four). With the PolarPro Defender caps, though, this will take a little planning, since the caps are sized to fit specific lenses and/or lens hoods. The KUVRD caps only come in two sizes and will fit a wider variety of lenses.

A 77-82mm PolarPro Defender costs about $30, and a single KUVRD cap costs just a couple of dollars less (about $28), but they can also be bought in multi-packs at a discount (2 for $50, 4 for $90, etc). There’s also an “original” version of the KUVRD cap that is intermediate in size between the Magnum and Micro, and costs about $15. All carry a lifetime warranty. If you manage to break or tear your KUVRD cap, they’ll replace it for free.

Both caps are a big improvement over standard pinch-caps, but as good as they are, $30 for a lens cap is asking a lot, though a lifetime warranty helps. It’s probably worth it to protect your multi-thousand dollar optics, but I can’t say that they’re a great deal. The original KUVRD cap, which is about half the price of the Magnum/Micro v2.0 line, is a good price, though.

If you’re interested in the KUVRD cap, there are cheaper Chinese knock-offs out there for about $10, generally sized like the original KUVRD cap. You won’t get a warranty, and I’d be wary of the quality. It’s probably worth spending a little more on a KUVRD. 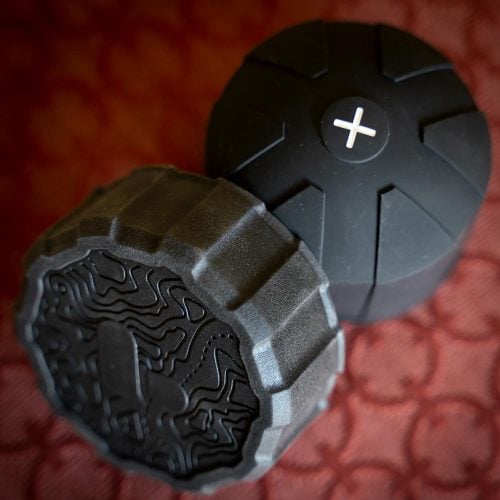 GET SOME NEW CAPS!
Pick up some new caps from the links below & help support these reviews!
Buy CAPS
KUVRD at Amazon
KUVRD at Adorama
PolarPro at Amazon
PolarPro at B&H Photo

Both caps offer excellent protection, but like everything in photography, your choice should depend on how you actually work and what you personally need. Ultimately, the PolarPro Defender will offer greater protection to the front element of your lens against collisions, while the KUVRD caps will offer greater protection against sand and water. Both protect against general dust and smudges and minor abrasions.

If you’re looking for one-handed operation in the field, the PolarPro Defender is easy to install with one hand, and both can be easily removed with one hand. If you don’t usually work with a camera bag handy or want a cap that’s easy to deal with when off of the lens, the KUVRD has the advantage, but if you will mainly be using it in your camera bag or can easily stick it inside a pack when you remove it, the PolarPro may make more sense for you.

If you always use lens hoods like I do, make sure that you find a cap solution that will work with them. I find the KUVRD caps are much more flexible in this regard.

After having access to both options for a couple of months, I do find that I reach for the PolarPro for those time when I feel like it will work for me; it’s easier to install and remove, and that’s a big factor. However, those times are pretty few and far between. Ultimately, I tend to use the KUVRD caps because they give me the kind of protection that I need while being easy to stow away in the field and they allow me to carry my lens hoods.

Which Would You Choose?

Let me know below, along with any questions or concerns that you have about either range of caps. Think that there’s some factor that I didn’t consider? Also let me know. Thanks!