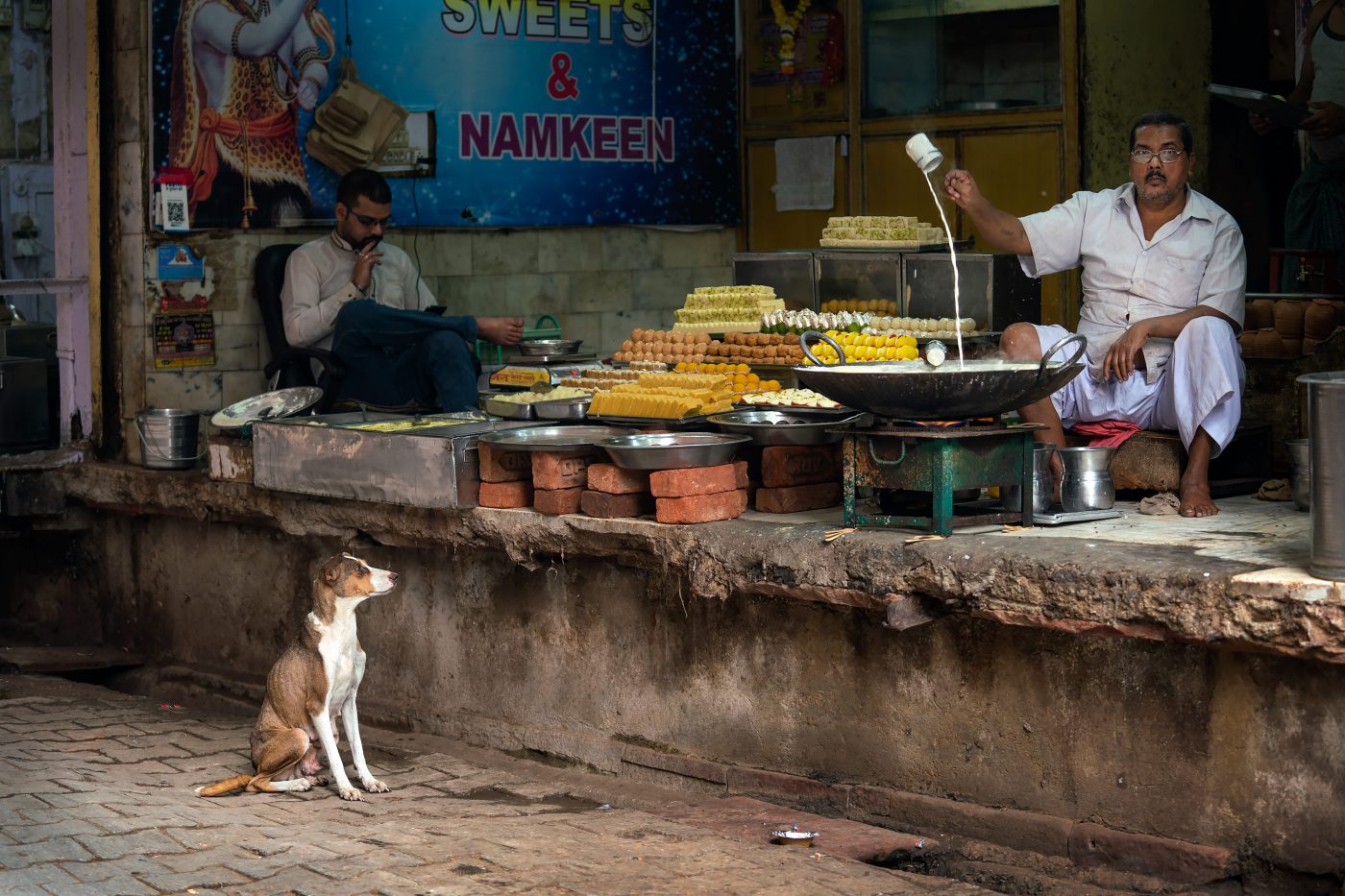 The Dogs of New Delhi

As I wandered through New Delhi and the cities of Northern India, I could not help but wonder about the lives of the ubiquitous stray dogs.

For every cat in Croatia there’s a dog in New Delhi. Basking in sunbeams, lounging in corners, the dogs of India wander the busy avenues and narrow backstreets, sometimes alone but often in numbers. They eye your food longingly, but keep their distance. With so many dogs on the streets, it’s no surprise that the cats have disappeared.

Prominent ribs and scruffy fur leave no doubt that they are strays. They scratch at fleas. They chase monkeys for fun and chase rats for food.

In the quiet early mornings, while people are still at home cooking breakfast, India belongs to the dogs. They uncurl from their overnight nooks and sift through the detritus of the night past. As the sun begins to warm the concrete they ease into its beams to recharge.

I hadn’t intended to photograph dogs of India, but they were unavoidable. I’d begin composing a shot in a step well, and a dog would saunter into the frame. I’d raise my camera to photograph a street market and realize that there were dogs lurking in the shadows. As I’d walk through the streets, I’d see dogs wedged into every crack and crevice.

Though there are many of them, the dogs of India do not seem dangerous: they’re persistent rather than aggressive; friendly and often meek, individually, but loud and raucous in larger groups.

Only once during my stay in India did I notice any sort of canine aggression towards people. One morning in a street market in Agra, a small pack of dogs rambled out from an alleyway, barking and nipping at each other. As they did, a man and woman sharing a moped rounded the corner, and one of the dogs, perhaps startled by the whine of the engine, gave chase. As the moped slowed down to weave through the crowd, the dog caught up and snagged the woman’s bright orange sari between his teeth and opened up a rip several inches long before letting go.

I was continually amazed by the deftness with which dogs navigated the chaos of Indian street traffic. They fearlessly trot out into busy streets, perfectly timed to avoid the swerving cars and motorcycles, and reach the opposite side without even raising a honk.

The dogs of India have settled into the same station as millions of Indian people. They do not receive the basic care or dignity that they should, and they do not expect it, but they’ve adapted to fill the niches that are within their reach. They help keep the streets clean and the rats away, so they are tolerated and sometimes even appreciated with bowls of leftovers placed in the gutters in front of prosperous households. As they struggle to survive they take comfort in the unity of their roving packs, whose voices sometimes raise a cacophonous but harmless din in the night.

As I walked though the cities and villages, I found weary canine mothers teaching their latest litters to navigate across the treacherous rivers of traffic in the Indian streets as they search for richer trash heaps.