For the past several years, Sigma's ART series lenses have been among the best on the market, and both of these lenses are excellent. But which one should you buy?

When I heard that Sony would be releasing a new 24mm f/1.4 G Master lens this winter, I immediately wondered how it would compare to the Sigma 24mm f/1.4 ART lens that has been considered one of the best on the market by reviewers over the past couple of years, and has recently been made available in Sony E-mount. The Sony 24mm f/1.4 GM lens costs $1398, while the Sigma only costs $850, making it an attractive option, on the surface.

Unfortunately, my efforts to give these lenses a thorough comparison were thwarted by a spell of snowy weather here in the Seattle area. The mountain passes were closed, the schools and many businesses were closed, and many of the steep, icy roads that weren’t officially closed were effectively closed to my 2wd car. Consequently, this is not the review I’d have liked to produce, and I may follow it up in the future with a Part Two.

So, consider this video a “First Impressions” rather than a full review, but the basics are here.

As you start watching the video you may notice that the details on the Sigma side of the resolution comparison are a little larger than those on the Sony side, and that the edges seem to be slightly cropped.

This is simply because the Sigma has a slightly narrower angle-of-view than the Sony lens, though I didn’t take the time to measure which one is more accurately a 24mm (if either of them are). However, I did compare the distance between some set points in two photos taken from the exact same location (in fact, I did this on two sets of photos, just to be sure).

In each case, I found that the difference in the distance between the two points was +4.3%. This means that if we assume that the Sony is a 24mm lens (it’s unlikely to be wider), then the Sigma is just about 25.5mm.

It’s a pretty insignificant difference; definitely within the normal range of variation (about 5%) that is typical for manufacturers to vary from the stated focal length of the lens, but it is visible in the comparison, so I thought I’d mention it. 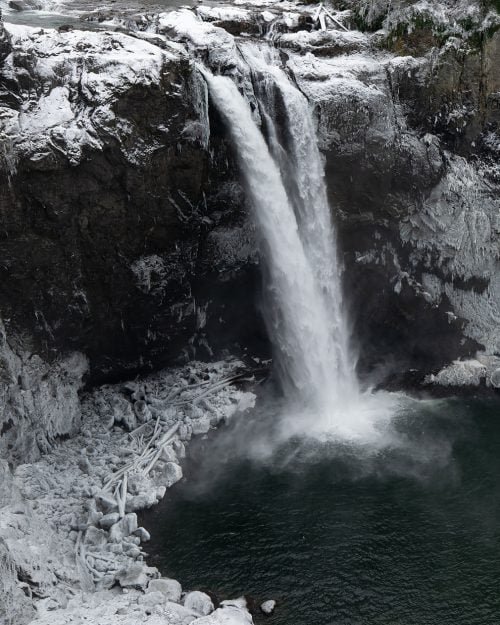 RAW Files
Here you can download two sets of images from the Snoqualmie falls shoot. You are welcome to use these files to better assess the quality of the lenses, but they may not be used for any other commercial work or personal projects.
RAW File Downloads
Full Sequence (800MB)
Extra F4 and F2.8 (270MB)

Normally when doing a comparison like this, I shoot somewhere between six and ten different scenes for photos test resolution, each of which contains multiple shots at each aperture, and I choose the ones for the video that are most representative of the lens.

This time, I shot three very similar sets at the same location, expecting to shoot the rest later when I could get to some additional locations. Of these sets, all were problematic. In one set, all four shots from the Sigma at f/4 (taken several frames apart) were a bit blurry on close inspection. In the other two sets, the f/4 shots were also a little blurry (or quite blurry), and each had their own additional problems, too, so I used the best of the three, which only had problems at f/4.

I can’t explain the blur problems at f/4. As I mentioned, I always re-focus between every shot, and the chances against having encountered vibrations every time at f/4 are too high to accept as an explanation, especially considering the shutter speed was around 1/1000th of a second, so vibrations shouldn’t have been a factor anyway.

It is possible that it’s a focus problem with this particular lens at f/4, perhaps related to the electronics or firmware. I originally speculated that someone had played with the focus settings using the Sigma dock, but I now remember that there is no dock for E-mount lenses (only Sony A). I also wondered about “focus-shift”1Focus-shift is a phenomenon in which the focal plane moves forward or backward when the lens is stopped down. This is a problem in SLRs because the lens is always focused with the aperture wide open, and the aperture stops down right before the shutter release. at f/4, but this is a mirrorless camera, so the camera focuses with the lens set to f/4, so there should be no focus-shift. I’m contacting Sigma for further information.

To summarize: both lenses are very sharp in the center, with the modest difference disappearing around f/2.8.

Away from the center, they’re both just a hair softer, but still quite good. The Sigma lags a bit further behind wide open, but still catches up around f/2.8.

In the corners of the image, the Sony is remarkably sharp wide open, while the Sigma has to be stopped down to f/2.8 to start looking good. At f/2.8, the Sigma looks very similar to the Sony, and by f/4 or 5.6, they’re indistinguishable for all practical purposes.

The Sony lens is significantly smaller and dramatically lighter than the Sigma. In Sony E-mount, the Sigma lens is about one inch longer than in Canon EF mount, making it a bit front-heavy, especially considering that it weighs 27.5 ounces: about 75% more than the Sony GM lens.

Beyond the size difference, the most obvious difference between the two lenses is the presence of a manual aperture ring on the Sony 24mm f/1.4 GM lens, which is complimented with a de-click switch for video shooters.

This extra feature for video shooters is, unfortunately, a serious annoyance for photographers because Sony failed to include a “lock” button on the aperture ring, a feature that has been standard on aperture rings for decades.

As a result, if you’re carrying your camera around on a strap, it’s very easy to bump the ring from the “A” position to the next click over, which is f/16. This is particularly common when the camera is on a cross-body strap and hanging on the side of your body. After the first time it happened to me I hoped that it was a fluke, but after it had happened several times over the course of a few days, I knew it was a serious concern. I ended up placing a small piece of gaffer tape on the ring on the bottom side of the lens, which held it in place and solved the problem, but we shouldn’t have to use tape on a $1400 lens.

For action, when shooting basketball (and a few shots at a cheerleading competition), there was no noticeable difference in autofocus speed and tracking ability. I got a very high percentage of sharp photos with both lenses.

Some questions remain about whether the blur that I experienced with the Sigma lens on some of my resolution test shots was the result of missed focus rather than vibration. I only had the problem with the Sigma lens, but the lens was also much heavier than the Sony and I was using my Vanguard tripod with the right-angle arm extended slightly to get the camera beyond the barrier at the edge of the falls, so it would have been more susceptible to vibration.

There was no appreciable difference in the vignetting performance of these lenses. Both lenses showed a noticeable amount wide open, but it was well controlled at f/2 and beyond.

Though bokeh is less of a concern with wide angle lenses than many others, both lenses did pretty well in my limited tests. Looking at this set of out-of-focus stage lights, we see that the bokeh in both cases is nicely round without busy artifacts or contrasty edges (though I personally like the contrast in the bokeh of the Sigma 50mm f/1.4 ART lens, for example, it’s all a matter of taste). In some areas, I did see a hint of the concentric circles that are typical of aspherical lenses in the Sigma (often called “onion rings”), but they were just that… hints, not obvious patterns.

Again, I can only offer my first impressions of these lenses: further testing is necessary.

Ultimately, both lenses are optically excellent, especially in the center of the frame, but the Sony maintains an advantage in resolution and sharpness away from the center of the image at f/1.4 and f/2, and in the corners (probably) until f/5.6.

They both have their “handling” issues: the Sony has an annoying aperture ring, and the Sigma is big and heavy. However, the Sony’s problem can be fixed with tape, and the young and strong might not mind the Sigma’s weight.

Autofocus performance with both lenses is good for shooting action, and is good in general with the possible exception of the f/4 issue on the Sigma, though that remains unclear.

Which should you buy? As these are both excellent lenses, which one you should buy will really depend on your particular needs and the point you’re at in your career or hobby. If money is no object, buy the Sony. If money is an object but you have all the other lenses you need, still consider buying the Sony.

If you’re still building a lens collection, consider buying the Sigma and putting the difference toward another lens that you need (the difference will buy most of a Tamron 28-75mm f/2.8 or Sony 85mm f/1.8, for example), especially if your photography doesn’t require edge-to-edge sharpness.

As usual, if you have any questions or comments, please feel free to leaves them in the comment section below, and I’ll answer them as soon as I can.