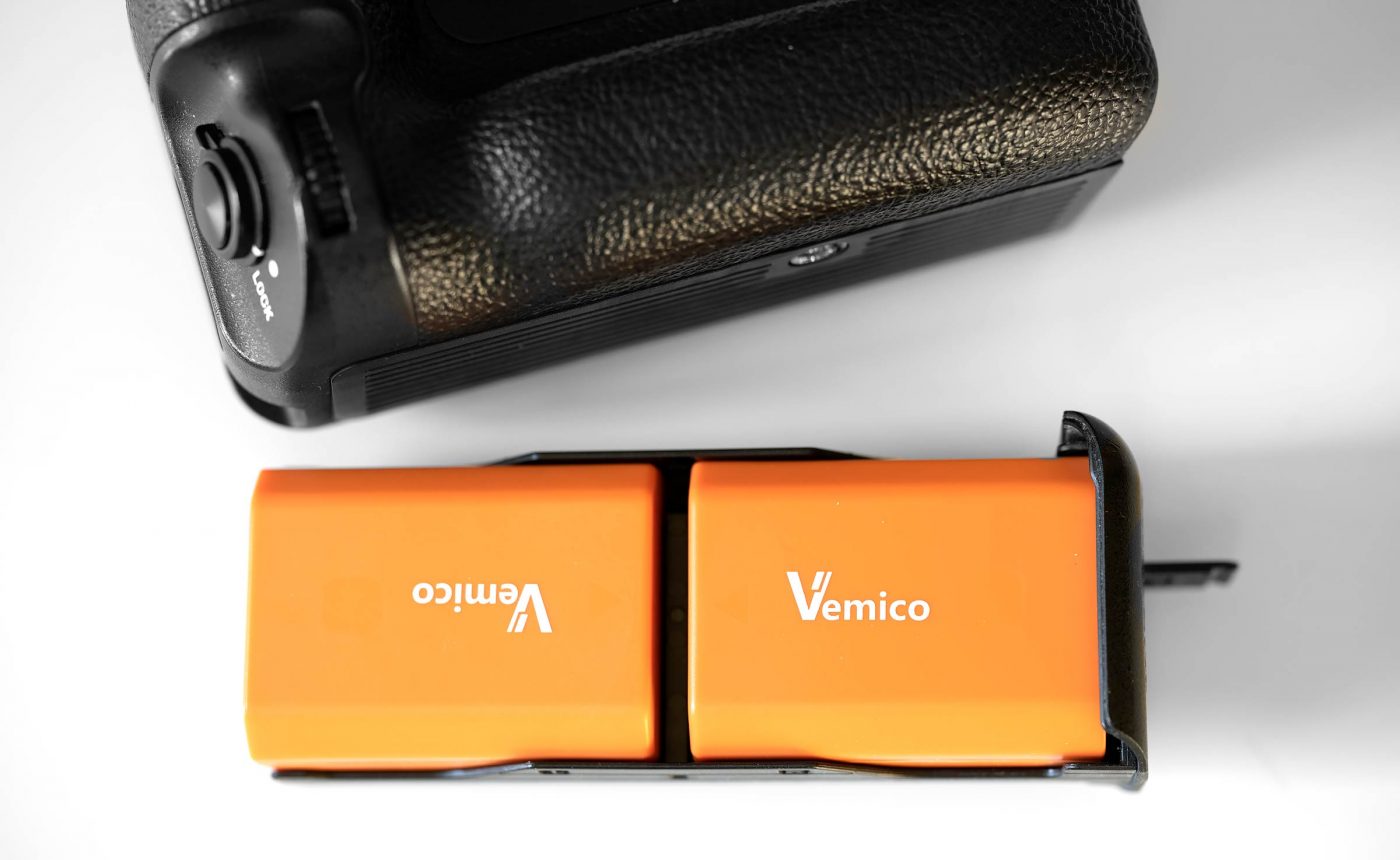 Sony NP-FZ100 batteries are expensive. But does it make sense to save money on these cheaper, orange Vemico batteries?

As photographers, we get accustomed to paying huge sums for small things, but I still have trouble paying car-battery prices for a little lithium-ion battery for my Sony camera. The Sony NP-FZ100 batteries for Sony A7 and A9 series cameras cost about $80, while 3rd party (mostly Chinese) batteries cost less than a third of that price. I bought a pair of Vemico NP-FZ100 replacement batteries along with a USB-C powered dual-battery charger for less than $50. Were they worth it? Here’s what I found.

Generally, I shoot with two batteries in the grip of my A7RIII. I paid full price for my second genuine Sony NP-FZ100, but I thought long and hard about the cheap 3rd party batteries. But when it came time to purchase a set up backups, I bought a set of Vemicos and saved over $100.

One of the reasons that I chose the Vemicos is that they’re bright orange, making them easy to find and also easy to identify; I like to use two identical batteries in my grip, even though they’re used in succession rather than in series.

Aside from being orange, there is little to distinguish the batteries from their Sony counterparts. They’re exactly the same shape and size, and even claim to have the same capacity (2280 mAh) at 7.2v.

They ship with a dual-battery charger that is USB-C powered, and must be used with an existing charger or USB port. A soft carrying case is also included.

I started by simply using the two Vemico batteries in my camera for a couple of months. They worked just fine: there they didn’t die noticeably faster, and the camera didn’t have any trouble communicating with them (there were no errors, as I have had with some cheap batteries for Canon). So far so good.

But since I rarely run my camera batteries completely dead anyway, I needed a better way to test capacity. I have a pair of LED studio video lights that run off of Sony NP-F970 batteries, which are a similar 7.4 volts, so I decided to hook up the NP-FZ100 batteries and run them dead. This may not be very good for Lithium batteries, so don’t try this at home.

The Vemico batteries were hooked up and ran the LED lights, and after about an hour started dimming. After another 15 minutes, they dimmed significantly, and then at the times marked above, the power died completely and the light went out.

When I hooked up the Sony batteries, I expected them to run a little longer… perhaps an extra half hour. What I found was that the performance seemed very similar for the first hour and a half. The Sony batteries kept the light at its brightest for about an hour, and then it started dimming modestly over the next half hour. The difference was that at the 1:30 mark, the Sonys didn’t die; they just kept going with the light getting dimmer.

After 3 and a half hours, the first Sony battery‘s light was still glowing, though at a dramatically dimmer level. I was sick of waiting for it to die completely, and removed the battery, and started testing with the second battery. The same thing happened: the light started dimming around an hour in, but remained moderately bright for around an hour, before dimming dramatically over the next two hours. This time, my patience held out, and after 15 minutes of flickering, the LEDs finally died just after the 4 hour mark (4:00:35).

This is a dramatic difference. The Sony batteries powered my lights for more than twice as long as the Vemico batteries. However, it seems that they were not putting out peak power for most of that time, so we can’t conclude that their capacity is twice as high as the Vemicos.

For my second test, I decided that a more practical method was needed. I attached a large lens with optical image stabilization to my camera (Sony 70-200 f/2.8 GM) and set the main dial to “Movie” mode so that it wouldn’t fall asleep, and attached the camera to a motorized camera slider, set to slide back and forth in a loop1The idea here was to keep the image stabilization system in the lens going and the autofocus in the camera and lens working all the time, to better simulate real world use, and also to drain the batteries faster and put less strain on my patience. Then I sat and waited for the camera to drain the battery.

The Sony battery dropped to 50% power after about an hour and 15 minutes, and by two hours, it was reading 20%. At 2 hours 32 minutes, it hit 0%, but the camera stayed on with a flashing red battery icon. At 2:37:45, the camera finally shut off after a brief “Battery Exhausted” message.

The Vemico batteries hit 20% power at one hour and 47 and one hour and 49 minutes. At 1:55, the first battery showed 16% power on the back of the camera, but at 1:58:35, the camera powered off with no warning… completely dead. The second battery was almost exactly the same: the camera died at 1:58:29… amazingly consistent.

At best, the Vemico batteries will provide about 75% of the shooting time that a Sony battery would, to start (keep in mind that the tested Vemico batteries were brand new; the Sony batteries 2 and 3 years old). Unfortunately, the power level of these batteries is not correctly reported to the camera, which may lead to unexpected power loss.

Even taking into consideration their lower performance, the Vemico batteries cost about 1.5 cents/mAh, while the Sony costs 3.4 cents/mAh2This is based on the assumption of 2280 mAh for the Sony and 1710 for the Vemico, which may be slightly off in absolute terms, but the ratio is correct even if exact mAh numbers are off. This also counts the Vemico charger as a free gift., so you’re still getting more than twice as much battery power for your money with the Vemico batteries.

That said, I can’t tell how the Vemico batteries will hold up in the long run. I don’t know how fast they’ll start losing capacity, and down know how big a problem self-discharge will be (if at all).

In the end, I can’t recommend Vemico NP-FZ100 batteries for photographers who will be using them professionally or in critical situations: journalists, event and wedding photographers, and videographers who work for long periods and rely on their full battery lives should probably stick with Sony.

But if you’re a hobbyist and have plenty of time to switch out your batteries if they happen to die on you, or if you rarely run your batteries down below the last 20% but might not be near a charger every night, then the Vemicos might work for you. Just understand what you’re getting before you buy.

UPDATE: After my initial tests, I carried these batteries as backups for a few different shoots, and finally, I needed them. When I put them in my camera, though, all I got was an error on my rear LCD:

Batteries that are not reliably compatible are not worth owning. Avoid these.

Review: Vemico NP-FZ100 Replacement Battery for Sony Mirrorless Cameras
Conclusion
This battery seemed fine at first, and worked with some cameras and lenses, but then I started getting "Incompatible Battery" warnings from my camera, which is a big problem when you're at a shoot and these are your backup. I can't recommend these batteries.
Battery Life
7.5
Compatibility
2
Value
5
Reader Rating0 Votes
0
Pros
Cheap
Orange
Cons
"Incompatible" Error on Sony Sometimes
Sudden Death
4.8
Avoid.