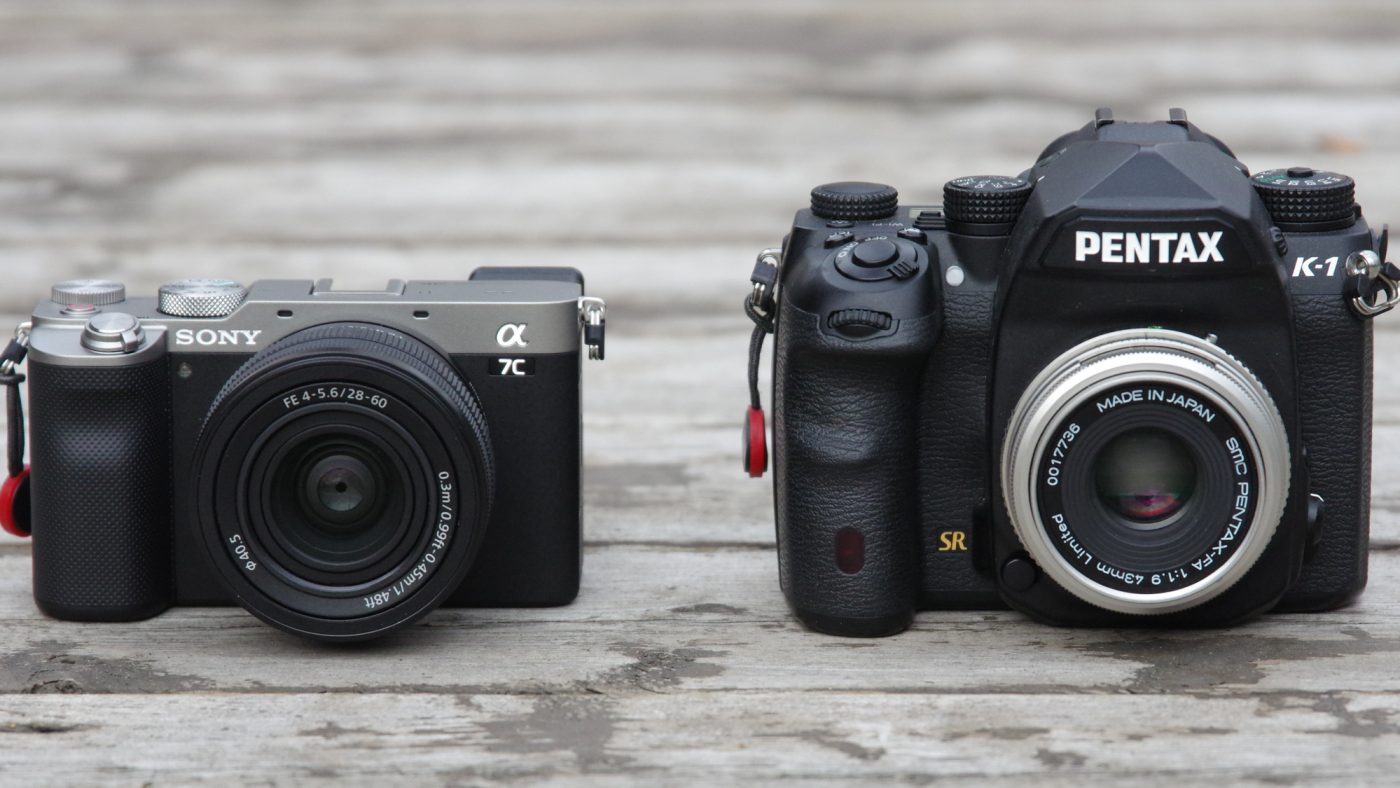 Mirrorless cameras have taken the photography world by storm in recent years. DSLR innovation had not stagnated entirely, but had reached a point where improvements were incremental rather than revolutionary. Mirrorless cameras came with the promise of smaller bodies and lenses, better capabilities for video, previews representative of the final image, and fewer mechanical components.

I have been a DSLR shooter for over 12 years. Nowadays, this makes me somewhat of an oddity. What’s more, I use Pentax, the eternal underdog.

Pentax cameras have a few weaknesses, namely AF tracking and video capabilities. The lineup of full frame lenses is also not as full as with some other brands. The company’s high points are ergonomics, sensors performances, and a plethora of features in each camera body.

I have been eyeing the recently released Sony A7C full frame mirrorless camera. This camera is perhaps the best recent example of the promises that mirrorless brings, enough so that I decided to acquire it and add it to my kit. The A7C costs $1,798.00, which is not a lot more than the APS-C Sony a6600.

In this article, I present my observations on the Sony A7C from the viewpoint of a long-term DSLR shooter. This article is not about leaving one brand for the other. It is not about which system is best. It is a series of observations aimed at highlighting the differences and strengths of each type of camera.

The Pentax K-1 mark II DSLR is a 36 MP, full frame camera. It features a weather-sealed frame, in-body image stabilization, a built-in GPS with an astrotracer function (in essence, the ability to track stars thanks to the IBIS system). It also offers a unique tilting screen, wifi connectivity and dual card slots. Last, it takes advantage of its IBIS system to offer pixel shift (enhancing the color rendering and resolution by moving the sensor to overcome the limitations of the Bayer filter) and the ability to act as a “shift lens” to correct perspective distortion.

The K-1 mk II can use all of the K-mount lenses since the inception of that mount at the end of the 70’s. Its sensor is known for its excellent resolution and dynamic range.

It is a big camera by today’s standards, and while its single AF is fast and reliable, AF tracking is average at best. Also, it is weak in the video department, with no 4K and very basic AF.

The Sony A7C was released in October 2020. Using the same sensor and processor as Sony’s A7III, it offers 24 MP in Sony’s smallest full frame body to date. In fact, the A7C is close to the size of Sony’s APS-C models of the 6000 line. It also offers weather sealing, although Sony’s implementation doesn’t have the best reputation in that regard. With a fully articulated touchscreen, a decent number of external controls, IBIS and the most recent implementation of Sony’s AF tracking, the A7C does not skimp on features. It includes WiFi, Bluetooth and NFC.

The 24 MP sensor has an excellent reputation. Coupled with responsive AF and a high 10 fps burst rate, this compact camera packs a lot of punch. Many of its features will also be of interest to videographers.

While the K-1 is far from the largest DSLR camera on the market, it certainly is big. The Sony A7C appears minuscule when compared to it. This is compounded by the fact that the A7C can ship with the new retractable 28-60mm lens.

Even when mounting what is currently the smallest AF Pentax full frame lens, the FA 43mm F1.9 Limited, the K-1 dwarfs the A7C.

The first impression I got when handling the Sony A7C was probably exactly what Sony had in mind: this thing is small! It’s difficult to believe that a full frame sensor fits inside. The camera certainly delivers on the mirrorless promise of smaller sizes.

In hand, the camera feels solid, thanks to its metal body, and impressively light. The grip is on the narrow side. It’s clear that Sony decided to make things as small as possible. Handling would have been improved with a larger grip with a deeper finger recess (or a vertical grip), but the camera would have become bigger as a result. Still, handling is better than expected given the small size. Nonetheless, the larger K-1 feels better in the hand. That is to be expected since a larger body offers more real estate. Despite this, the A7C manages to do better than I would have expected.

Being used to having external controls all over the larger Pentax K-1 body, the diminutive A7C takes a bit of time to get used to. It is to be expected that a smaller body offers fewer controls. Still, the A7C makes the most of its size. The fact that almost every button can be customized is commendable. After a customization session, I found myself wondering which function to map on the last custom button!

In general, the ergonomics of the mirrorless A7C are not too much of a departure when compared with a DSLR. After a short while, the camera feels easy to use and intuitive. This is, perhaps, the biggest compliment I can give.

Die-hard DSLR lovers will tell you that seeing the actual light passing through the lens and into the optical viewfinder is the best way to create an image. Mirrorless devotees will claim that seeing the image as it will turn out is preferable. So, which is it?

In fact, I would argue that, whatever the type of viewfinder, having a large viewfinder display is preferable to a small, tunnel view. This is particularly important for people, like me, who wear glasses.

Early reports claim that the viewfinder on the Sony A7C is small and hard to see. Perhaps it is, when compared to the viewfinders on larger mirrorless cameras. Maybe thanks to those pessimistic reports, I actually find the viewfinder perfectly acceptable. It is clear, bright, and easy to see even with my glasses.

There is almost no lag, something I had been worried about. At times, I can forget it is a screen.

I find myself with no clear preference between the DSLR, through-the-lens viewfinder, and the mirrorless screen. I like the proximity and involvement offered by an actual viewfinder. It brings me in the scene in a way that I don’t, yet, manage to duplicate with a screen.

Using the screen removes almost entirely the need of reviewing each image after it was taken. This is one an important perk. The second benefit is the possibility to overlay almost any kind of information on the screen.

The A7C uses a vari-angle LCD, which swivels to the side. This design is common and intuitive. It allows the screen to be oriented towards the back, to protect its surface. It also allows complete freedom of orientation but has the screen protruding on the side. This makes it more fragile.

By opposition, the K-1 uses a unique tilting LCD design. The screen is mounted on sliding struts. This lets the screen be tilted up by 90° down and towards both sides by about 30°. It is robust enough that the camera can be held by the screen without risk. Deploying the screen is easy: simply pull on it and orient it as desired. This configuration does not allow the screen to face towards the front for vlogging or selfies.

Both configurations have their strengths. I cannot say that I prefer one over the other. The K-1’s screen is surprisingly intuitive. It is also faster to orient most of the time. The Sony A7C’s screen is more versatile, especially for overhead shooting and for selfies. It can also be protected by folding it back towards the camera body.

This is where the A7C shines. Coupled with the perfectly silent FA 28-60mm, autofocus feels instant and accurate. The many AF options offered by Sony can be overwhelming but, even when letting the camera operate automatically, the results are there.

By opposition, the K-1 is a camera which performs at its best when the photographer is more closely involved in the AF process. The number of AF points is of course lower. AF is an area where mirrorless is a big leap forward. It is easy to discuss AF speed, and the A7C is superb in this regard, but the sheer versatility of a mirrorless’ AF is its most remarkable trait. The number of AF points, hybrid AF (both phase and contrast detection), powerful tracking, and the use of the whole frame for AF are all perks of mirrorless cameras.

There is no cutting around it: the Sony A7C offers a more powerful and versatile autofocus experience. For AF-S, both cameras perform well. The A7C excels for AF-C, eye detection, and general speed. The touchscreen AF point selection makes the A7C even more flexible.

Manual focus, on the other hand, is one area where the A7C lags. In theory, thanks to its focus-by-wire mechanism, it should be able to offer permanent MF override, but that is not the case. Mapping MF to one of the custom buttons seems to be the best way to quickly access manual focus. The K-1’s mechanical AF lets the user focus the lens directly, without help from the camera.

How does it feel to transition from a large DSLR to one of the smallest full frame mirrorless camera available?

Despite being a Pentax user for many years, and even considering the excellent Pentax reputation regarding ergonomics, my transition towards the A7C was painless. There is no cutting around that a larger DSLR body offers better ergonomics and easier access to external controls. Still, the Sony feels in no way crippled or compromised.

The A7C was designed with an obvious focus on size. What Sony accomplished here is impressive, fitting a full frame sensor in an APS-C sized body, without sacrificing ergonomics and functionalities. For someone coming to Sony from another brand, the AF tracking feels almost like magic at times, in particular when coupled with the responsive FE 28-60mm. Battery life, often the bane of mirrorless cameras, is on par with what I would expect from a DSLR.

With the A7C, Sony created a camera which might be able to sway a number of die-hard DSLR users towards mirrorless, and also draw users for other brands.

What are your thoughts? Have you made the switch to mirrorless, or are you staying with your DSLR? Feel free to comment below!