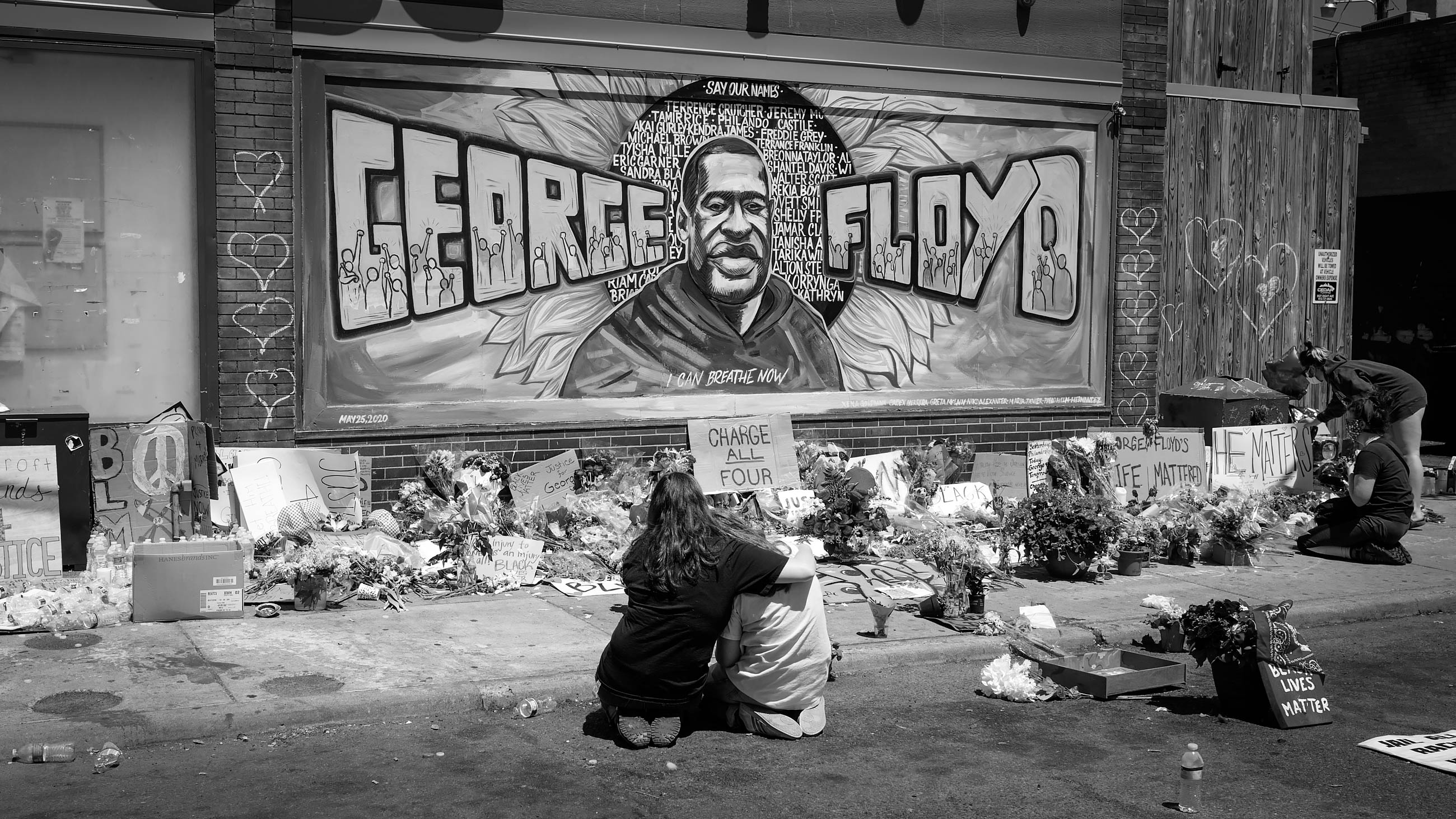 Minnesota photographer Julie Taylor has been on the scene in Minneapolis during that past weeks of tragedy and unrest. In this piece, along with her photographs we publish her experiences and feelings, unedited, as she submitted them. All views and opinions are her own.

On Memorial Day, George Floyd was allegedly killed by four policemen from the Minneapolis Police Department. Mr. Floyd was an African American man. He was 46 years old. The incident was video-taped and recorded by on-lookers. It revealed authority that had turned into unwarranted power and neglect. What was asked of Mr. Floyd was subordinate obedience. What transpired in the ensuing minutes was no less than murder. Mr. Floyd pleaded for his life. He stated “I can’t breathe”. He called out for his Mama. Yet the policeman kept his knee on his neck, applying pressure for 8 minutes and 46 seconds. Mr. Floyd apparently died at the scene on the street in front of the store he frequented. The policeman’s actions contributed to his death. There were other factors involved such as drug use and hyper-tension. He had allegedly used a 20 dollar counterfeit bill 15 minutes prior to his death. Okay….if true, using the illegal document was not right. However, Floyd’s death did not fit the crime.

What has transpired since this incident has been nothing less than an uproar. People from all walks of life and socioeconomic backgrounds have taken to the streets and demanded a change. They are not just asking for change, but are instead demanding change. The African-American community has especially cried out and pleaded to the authorities to change the defensive tone, the racism, the policies and attitudes that have long held them in oppression.

A couple of weeks ago I visited the 38th and Chicago intersection in Minneapolis. I viewed the site where Mr. Floyd died. I viewed the large hand-painted mural of Mr. Floyd on the brick building around the corner. I watched as two young girls knelt to the ground and prayed. They consoled each other and held each other.

Earlier in the day I wrote a small card to the Floyd family. It was placed in a large circle of flowers….I put my hand on my heart and just stood….thinking to myself that maybe it should have been for 8 minutes and 46 seconds, the amount of time that the indicted policeman had his knee on George.

There were many groups of young people protesting. They were peaceful, holding signs, and music was blaring from a truck with a huge mural stating “I can’t breathe” on the side. There was signage everywhere. The fences enclosing houses were smothered in images of George Floyd. The roads were littered in flowers and bouquets. The sun was shining, the grills emitting smells of burgers….free food and water for all.

There were representatives of the “Black Lives Matter” movement. A young woman representing her views was steeped in the knowledge of Malcom X’s teachings. It felt ironic that so many viewed this gathering as divisive, when in fact this crowd sought radical change and were cohesive to that end. So, many young people are passionate for change…giving voice to what has been silent. I remember thinking of the word freedom. The protesters had the freedom to speak their truth. We all should have that right. Did George? Or was his freedom taken away as his life was snuffed out?  Do minorities have the same freedoms as their white counterparts?  I do not think so. It seems there is little accountability, as that has been silenced by the majority. It takes this kind of incident to smack us in the face.

Racism exists. It indeed finds it’s way in the cracks and creases of daily life. It is sometimes blatant and often insidious. It can be so ingrained into our being that many feel justified and dismissive. Humanity is like a vast sea – a sea of faces that may seem skewed and undefined from a distance. It is only in relationship that one can come to an understanding that allows one to embrace difference and recognize the beauty of others who are different from ourselves. We are not diminishing our own merit when we give way and merit to others. We essentially are allowing others to receive what they know is theirs but have never had. It is quite audacious to hold the key to someone else’s freedom and rights. It is hard to fathom a 24/7, 365-day, 400-year curfew of sorts covered in a blanket of racism. We all have challenges but we all do not live under that heavy blanket of racism. This is a raw distinction and difficult to acknowledge. What remains so painfully apparent is that George Floyd and others before him have paid an unimaginable, even unto death price to enlighten us. Mr. Floyd,  may you be remembered for who you truly are. Rest in peace, Mr. Floyd.