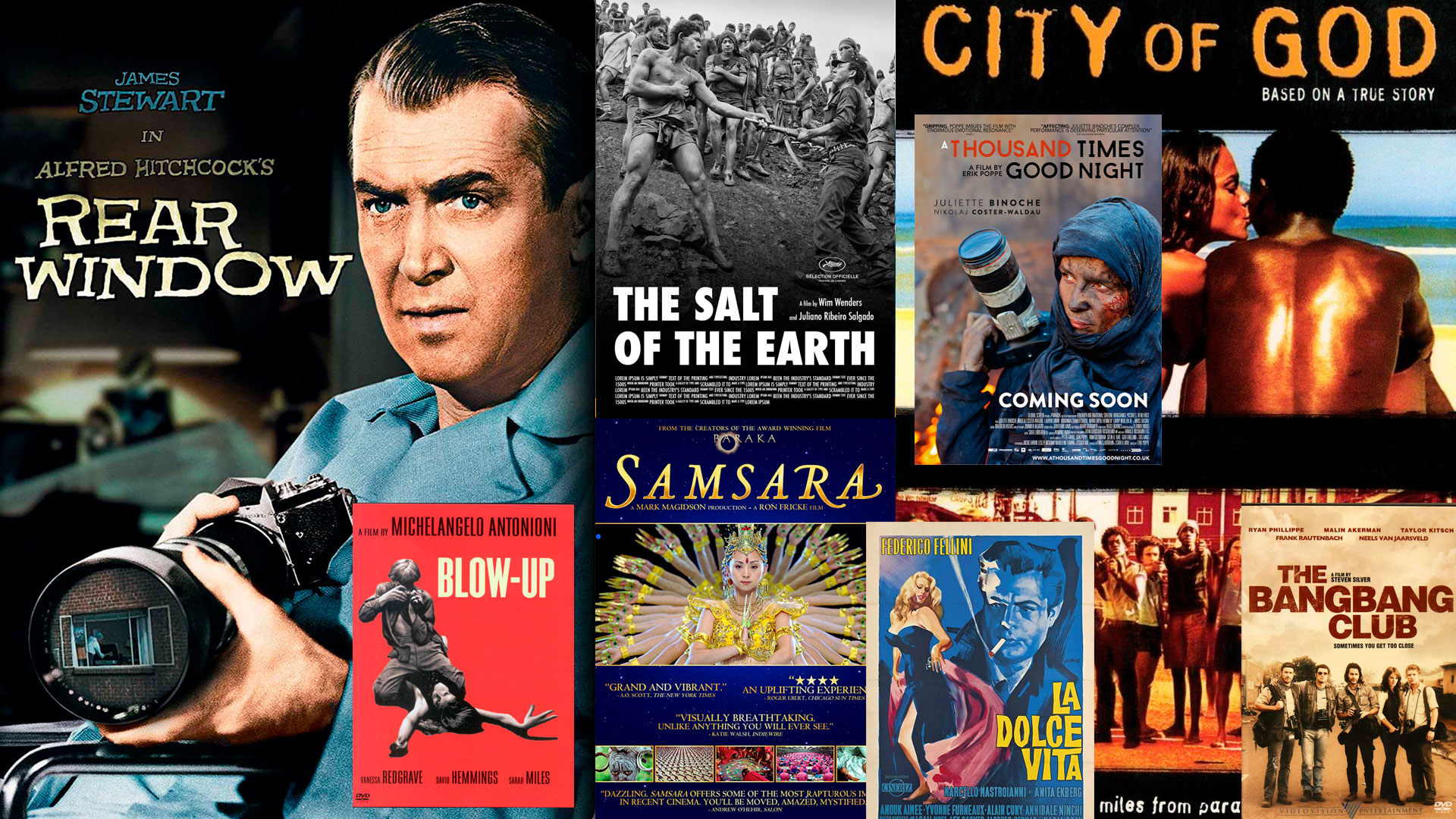 Around The Web
·18 min read

Being stuck inside for a bit, doing our duty to slow the spread of the COVID-19 virus, many of us are hopefully getting caught up on all of the boring but necessary tasks that photographers often put off (are all your images backed-up and tagged?). But at some point, you’ll just want to sit back and relax for a while, and that’s why we’re taking the opportunity to publish our definitive list of movies about photographers, photography, or that simply feature amazing photography.

I’ve provided links to watch them for free (with ads) on Tubi or Vudu when available. Of course, links are all affiliated, when possible, to help support the site.

Tastes will differ. Some of you will hate some of these movies. Since my background is photojournalism, you’ll notice that the movie subjects lean heavily in that direction (though there aren’t a whole lot of movies out there about wedding photographers, for example).

Anyway, I hope you find something that you enjoy! Have some favorites that are not in this list? Let us know in the comments below!

In no particular order (mostly)…

Rear Window (1954): This is probably the best movie on the list, though I admit that photography plays a minor role. L.B. Jefferies (Jimmy Stewart), a photojournalist, is injured in a racing accident and is stuck in his apartment with a broken leg, with occasional visits from his girlfriend Lisa (Grace Kelly). From his wheelchair, he watches the windows of his neighboring apartment buildings and their stories unfold.

City of God (2002): An incredible movie, based on a true story, following the lives of a couple of kids growing up in a dangerous neighborhood of Rio in Brazil. Gritty and real, but beautiful and powerful at the same time. Maybe better than “Rear Window”? It’s a tough call.

This one is the first of many non-English movies in this list. I hope you don’t mind subtitles.

The Killing Fields (1984): Cool because A) it’s based on a true story, B) it has Sam Waterston outside of Law & Order, and C) it’s a tense Vietnam-war story that also includes John Malkovich as a photojournalist.

A Thousand Times Goodnight (2013): Part action thriller, part drama, all gripping. Rebecca (Juliette Binoche) is a war photographer covering the conflicts in the Middle-East, but her need to continue her risky work creates some understandable conflict at home with her husband (Jaime Lannister… I mean Nikolaj Coster-Waldau) and daughter.

La Dolce Vita (1960): In a Federico Fellini film from before they really went over the top, we follow a paparazzo around Rome, seeing the contrast between his personal circumstances and those that he photographs as he tries to find a path forward in his own life.

The Bang Bang Club (2010): Another one based on a true story, the movie centers around a group of photojournalists covering the dangerous situation in South Africa at the end of the Apartheid era. In addition to a fast paced story, there are some interesting details about how freelance photojournalists used to be able to make a living selling to newspapers, who would then pass on the images to wire services.

Funny Face (1957): If you’re looking for something much more light-hearted than the rest of these films, this one has all the songs and dance you could desire. Audrey Hepburn as a model isn’t much of a stretch, and the photographer Avery (Fred Astaire) is based on Richard Avedon, who also worked on the film. Music is by George Gershwin! And this Japanese movie poster for it is gorgeous.

Photograph (2019): If you enjoyed the Indian movie “The Lunch Box“, you may also like “Photograph”, from the same director. After spending some time in India (and a lot more time with Indians), I’ve really grown to appreciate the social issues in this movie and its unusual ending.

Delirious (2006): Another paparazzi movie, and probably not among the best movies on this list for the average audience, but Steve Buscemi fans, he makes any movie worth watching. A celebrity photographer rather than a war photographer, for a change!

This movie seems to have been removed from almost all of the streaming services that I’ve checked. You’ll have to use your imagination to find it. | Vudu |

Everlasting Moments (2008): Set in early 20th century Sweden, a woman wins a camera and it changes her life. This is more of a film-festival movie than a blockbuster type, but it is strong and dramatic. Probably not a good fit for you if you’ve suffered domestic violence. I have not, but still had a hard time watching parts of it.

This one is not widely available, but you can rent it on YouTube or GooglePlay.

Full Metal Jacket (1987): My dad took me to see this Stanley Kubrick film when I was about 12 years old after I begged him for an afternoon (I don’t recommend watching it with your kids). It’s a great movie, pretty disturbing in parts, but the kind of war movie that everyone should see. It follows a group of young men through Vietnam-era Marine boot camp, after which the protagonist becomes a journalist for US govt. news. Though he does carry cameras, there’s really not much in the way of photography involved with this movie; perhaps just as interesting are cinematography tricks that make it look as though this was shot in Vietnam.

Hard Candy (2005): in which the photographer does not appear to be the hero. An excellent, creepy performance by a young Ellen Page.

Une Place Sur la Terre (2013): A disenchanted photographer rediscovers his love for photography again after a chance meeting. I haven’t actually seen this one yet, but all of us get a little disenchanted with photography now and then and can use a bit of a spark, and I’ve heard good things about the film.

Salvador (1986): An Oliver Stone film with James Woods and Jim Belushi, this is another photojournalist movie… this time focusing on the situation in El Salvador in 1980.

Blow-Up (1966): This movie is so famous that I’m a little ashamed to say that I’ve never actually seen it. I’m including it for based on its reputation alone.

The Secret Life of Walter Mitty (2013): One of the few movies (post 1960) on this list that you can safely watch with kids around. Also, one of the few that I haven’t actually seen in its entirety… but I did read the original story (which had nothing to do with photography, so it clearly doesn’t matter).

One Hour Photo (2002): Robin Williams could be just as creepy as he could be funny, and this movie is creepy. He’s a photo-lab worker rather than a photographer, but photography is just an important plot point in this film I thought it was worth including.

In addition, there was some really great camera work within the movie, too. We all miss Robin Williams.

Also Worth Mentioning: There were quite a few photojournalist movies in the 1980s like Salvador, including The Year of Living Dangerously starring a young Mel Gibson, and Under Fire with Nick Nolte. The much newer Harrison’s Flowers might fall into the same group, broadly, but I haven’t seen it. Triage (2009), by the director of No Man’s Land, is good but not streaming anywhere. Pecker was about photography and the “Art World”, but I just didn’t think it was very good. High Art admirably includes some LGBT themes into a photography movie, but I got bored and never finished it. Similarly, the 2015 movie Carol is supposed to be quite good and beautifully shot, but I haven’t seen it yet, either. Alfred has recommended Closer, and I generally like Natalie Portman movies, but I still haven’t seen it. Some lists include movies like Memento, and it’s such a great movie that I’m tempted as well, but just because there are some photographs in it doesn’t make it about photography. The French/Italian movie Daydreams is very much about photography, but I’ll leave it at that.

This section could go on for pages, so I have only added a few that may be new to a lot of you. If you love good imagery, do yourself a favor and watch a couple of these. At least watch the trailers!

Samsara (2011): I saw this at the Sarasota Film Festival when I was living down there, and I was mesmerized. The movie is a mix of documentary-style shots from around the world, posed action and portrait pieces, and time-lapse sequences, all with no commentary: just beautiful imagery. I was not previously familiar with Ron Fricke, and immediately went out and found his previous film…

Baraka (1993): Some of the most gorgeous motion film work I’ve ever seen. This was originally shot on 70mm film (or something similarly large… 65mm maybe), and has since been scanned to 8K and re-released. Find a high resolution copy to watch, if you can.

Ida (2014): This movie stuck out in my mind because it is a modern film that was produced in delicately handled, tonally rich black & white. There are some other recent B&W films, but they’re generally grainy, contrasty and intended to look low-fi. This one is just beautiful.

Additionally, the movie itself is pretty good. Set in 1960s Poland about a young woman who is about to take her vows to be a Catholic nun, but has to take care of a few things first.

Manufactured Landscapes (2006) and Watermark (2013): Like the Ron Fricke films, these two have some breathtaking photography in them, but there’s also a fair amount of ham-handed soap-boxing, and though I’m sympathetic, I have a hard time with what feels like propaganda at times. Maybe it’s just me. Anyway, well worth watching. Manufactured Landscapes can be watched for free on Vudu or Tubi.

Watching documentaries about photographers can be boring if you’re not really rapt by the photographer’s work, but then there are some documentaries that are so well made that they’re engrossing to everyone. The first three films on this list fall solidly into that category.

I won’t try to give details here, just the list for reference with the hope that you’ll find something that you enjoy.

Bridges of Madison County (1995): this movie will make any real photographer laugh, with Clint Eastwood toting around a Nikon with a giant power-winder on the bottom, though he still advances every frame with his thumb. Ugh.

Crocodile Dundee (1986): Of course, I loved this movie as a kid. It’s a classic, really, though not all of it has aged well. But even in 1986 I knew that the “…because you have your lens cap on” joke was idiotic.

What Am I Forgetting?

There must be a ton of other movies out there about photography or photographers to one degree or another. What else do you think should be included in this list? Let me know in the comments section below! Thanks!