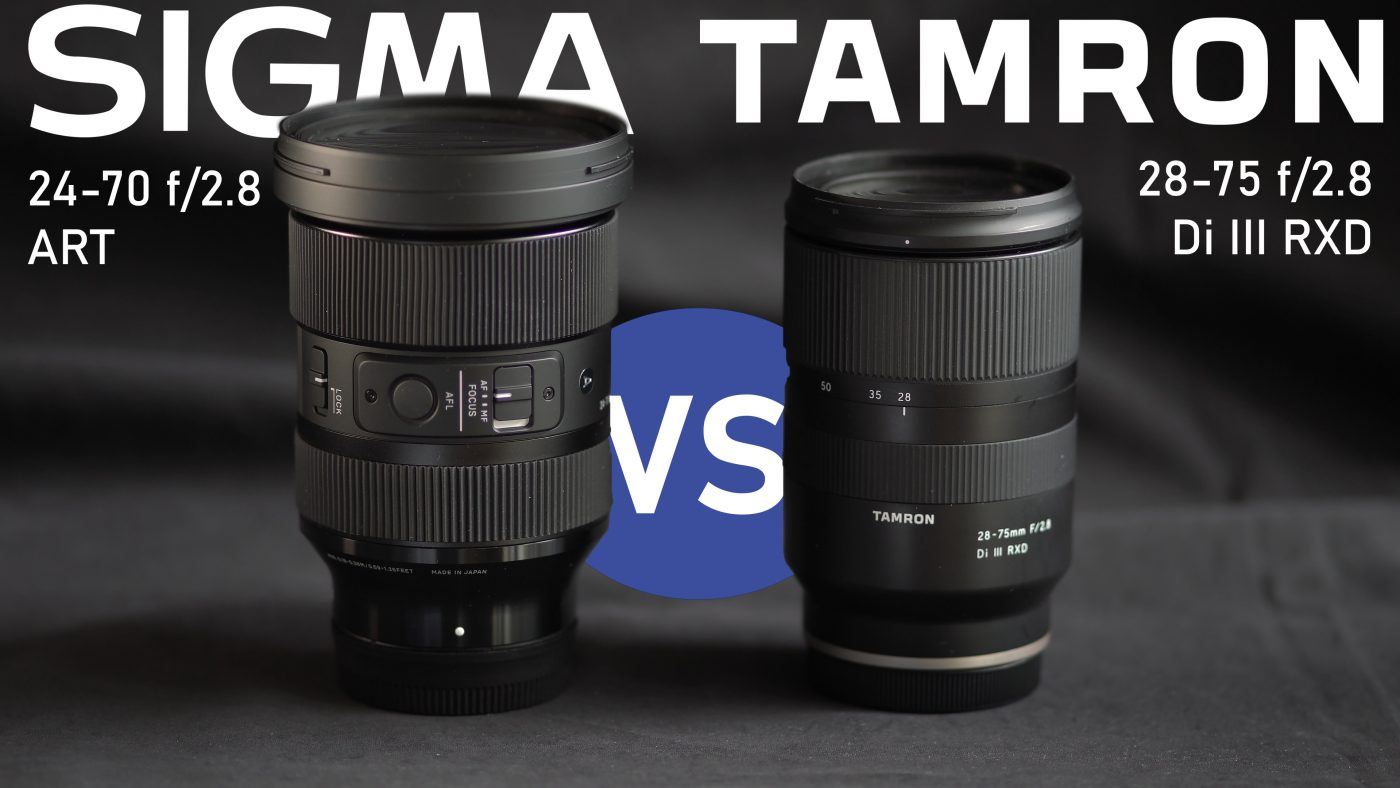 With the Sigma 24-70 f/2.8 ART lens for Sony E-mount, Sigma promises to satisfy a list of demands from countless Sony full-frame camera owners: they claim to provide a full 24-70mm zoom range with excellent image quality throughout, fast autofocus, and a price-tag that’s $1100 lower than the Sony GM, all in a body that still manages to be smaller and lighter than the Sony lens. But does it actually fulfill these promises? The answer appears to be a resounding “Yes“. But it still may not be the perfect lens for everyone. Read further to see if the Sigma or the Tamron is the better choice for you.

As much as I have enjoyed using the Tamron lens over the past couple of years, its minimalist design means that it has no manual switches or buttons, while the Sigma lens has an MF/AF switch and an AF lock button, along with a zoom lock switch. Of course, most Sony cameras have custom buttons that can be assigned to the same functions (not the zoom lock, of course), but I’d really prefer to be able just use dedicated controls.

If you’re young and healthy and don’t mind an extra half pound of weight, the Sigma will pose no problem. If you’re doing what you can to lighten your camera bag, though, the Tamron may still be your best choice.

How much of a difference is there between 24mm and 28mm? A significant amount, though after getting used to the 28mm end of the Tamron, I’ve rarely felt that I needed anything wider over the past couple of years… except when I needed something much wider (for which I bought the Tamron 17-28mm f/2.8).

While it is possible to completely reproduce the perspective of a 75mm lens with a 70mm lens and cropping, the same is not true at the other end of the zoom range; there is no substitute for a wide lens. Backing up and taking the photo from a further distance may be a workaround in some circumstances (when the subject is close enough to you that backing up will make a difference), but even then, you’ll be changing the distance relationships between the foreground, background, and subjects in the photo. 1By backing up, you’re adding more foreground into the image, and what used to be foreground in the image before backing up will seem smaller in comparison to the subject or mid-ground after backing up.

After reviewing the Sigma 24-70 f/2.8 OS ART for Canon mount, I didn’t have particularly high hopes for the new Sigma 24-70 model for mirrorless, so I was pleasantly surprised to discover how well the new lens performed.

At the wide end of the zoom (tested at 28mm), the Sigma produced noticeably better resolution than the Tamron across the frame, from center to corner. The difference was admittedly a minor one, in most cases, but visible outside of laboratory conditions.

At the other end of the zoom, at the Tamron was occasionally more contrasty, creating a sharper appearance to the image overall, but resolution differences were negligible. In some parts of the frame, particularly at f/2.8, the Tamron appeared to produce marginally better resolution, but it was a difference only visible when pixel-peeping at 100% magnification.

Ultimately, there will always be some variation between lenses coming off of a manufacturing line for mass-produced lenses; some will perform better than others. Looking at the images produced by these two lenses and their minor differences in resolution, I suspect that an especially good unit of either one will perform better than an average unit of the other… and they’ll all be excellent lenses2This is based on my experience with multiple copes of the Tamron, but only one copy of the Sigma, which could, conceivably be an unusually good unit..

So, expect that whichever of these lenses you buy you’ll get wonderfully high resolution images. I probably wouldn’t make a lens choice based on resolution, here.

In this regard my review has been impacted by restrictions in place during the Covid-19 outbreak here in WA state. With no team sports playing while I had this lens, and most parks and public places closed by law, I didn’t have the opportunity to test the Sigma for shooting sports and action as I normally would.

That said, I did use the lens pretty regularly over a period of a couple of months, and found the autofocus to be quick and quiet for general use. Eye and face detection worked (with perhaps a little more irregularity than my Sony lenses), and when I finally was able to use the lens while shooting some event coverage and street photography, I had no trouble with the focus performance.

The Tamron lens, on the other hand, has been on my camera for much of the past two years, shooting thousands of sports and action photos in addition to my general shooting. Its AF performance has been rock solid, even for video.

Consequently, I’ll have to reserve judgement on the Sigma’s AF performance for action photography, though I don’t have any reason to believe that there’s anything wrong with it. For the ways that I used the lens, it performed as it should.

Uncorrected, the Tamron and Sigma lenses both produce heavier amounts of distortion than I’d hope for in a modern lens, but they have likely been designed this way because of the in-camera corrections that are available with Sony’s cameras (which also correct chromatic aberration and vignetting) as well as lens correction profiles available for Adobe Lightroom and Camera RAW, and other RAW converters.

Since both lenses are effected, and since distortion and vignetting are so easily corrected in both cases, I don’t consider them to be important factors for choosing either lens for photographers. However, these factors may be important for people primarily shooting video (though “Lens Compensation” is also available for video in most Sony cameras). I don’t shoot video, as a rule, so I can’t comment on the matter.

There is a Significant difference between the bokeh produced by the Sigma and Tamron lenses, though. As you can see in the images below, when looking at bright highlights in the out-of-focus section of images (aka, bokeh balls), the Tamron 28-75 f/2.8 produces harsh, multi-ringed borders, while the Sigma produces smoother borders. Both lenses produce some concentric-circle artifacts from their aspheric elements (aka, onion rings).

When no “bokeh balls” are present, the bokeh of these lenses is much more similar. The Tamron’s backgrounds can be a little more contrasty.

In the end, I prefer the Sigma 24-70 f/2.8 over the Tamron in almost every aspect except for the size and weight where I prefer the Tamron to such a massive degree that it would really make this a difficult choice for me.

Both lenses offer excellent image quality. The Sigma is slightly better at the wide end, and the Tamron might edge out the Sigma at the telephoto end, though they are close in both cases. If you’re shooting with a camera in the 24 megapixel range (or less), you probably won’t see a difference at all in resolution.

The 24-70 zoom range is something that every serious photojournalist, event photographer, or travel photographer should own, and both of these lenses are excellent.

If you travel quite a bit or otherwise need to carry less weight, the Tamron might be the best option for you. It costs $ at Amazon.

If you don’t mind the extra heft, though, the Sigma covers all of your bases at a great price; the extra zoom range will make up for the roughly $200 extra that you’ll pay for the lens. The Sigma costs $1,099.00 at Amazon, with a variety of accessories thrown in to sweeten the deal.

As I mentioned, my testing has been somewhat limited by the COVID-19 pandemic. Have your experiences with these lenses been different than mine, or about the same? I’d love to hear either way.

Music: This is the first video that I’ve made with music from Hooksounds.com. Their music is often more cinematic than my standard, and I thought I’d give it a try… what did you think? If you make videos, they’re a good source for royalty free music. I’ve recently affiliated with them, so if you need music for a video, using my link here is a good way to support this site.