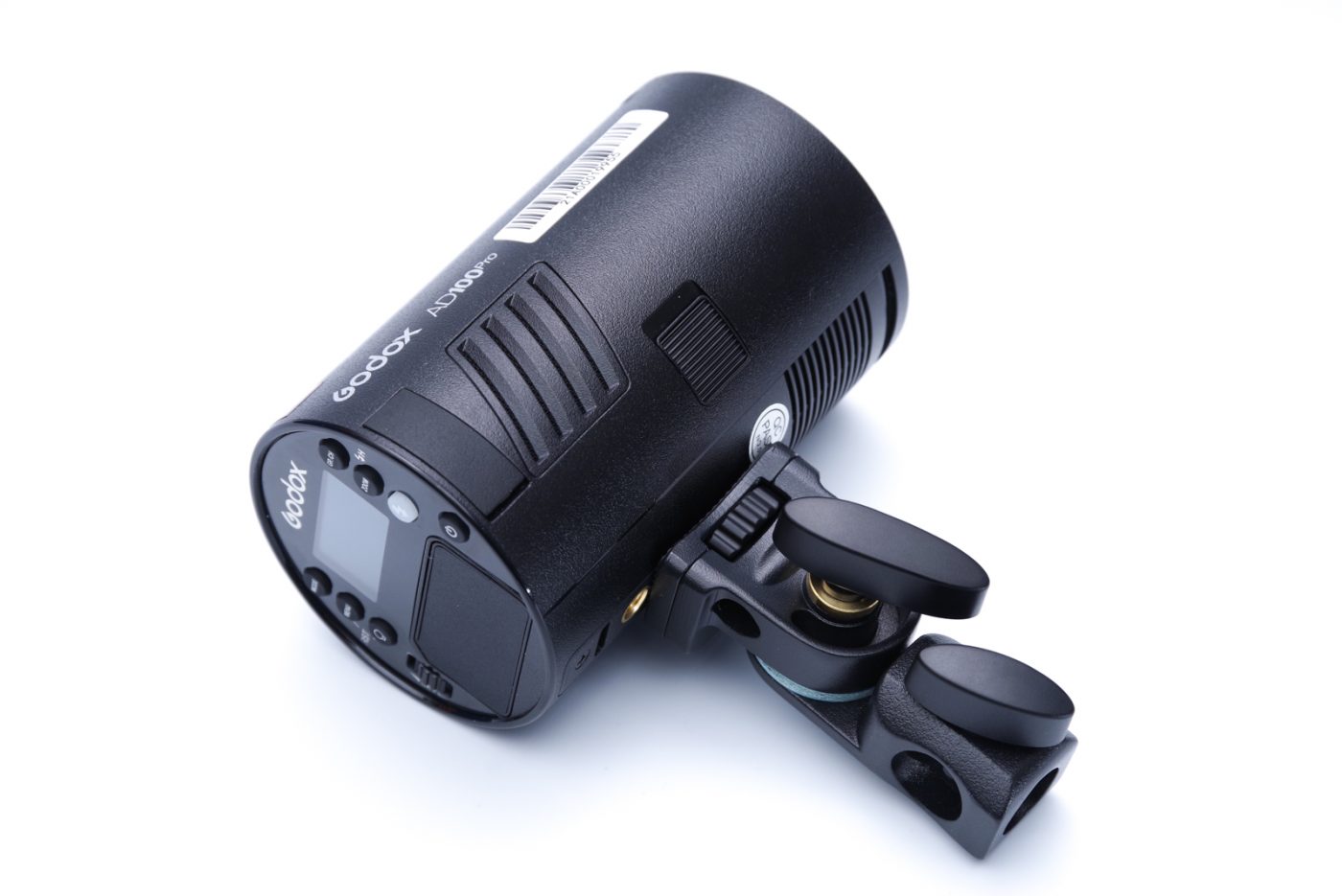 Godox has recently launched their newest battery-powered strobe, the AD100Pro. As the smallest and least powerful member of the company’s Witstro lineup, the AD100Pro offers more features and better performances than a typical hotshoe flash.

The flash’s head resembles the company’s V1 hotshoe flash, but in a smaller package overall. In fact, Godox markets the AD100Pro as being the same size as a soda can. This is approximately true, the AD100Pro being a bit wider. The flash is also more powerful than its V1 sibling: the V1 packs 76W of power, while the AD100Pro offers 100W.

The AD100Pro cannot be mounted on-camera; it must be driven either via a trigger, or as an optical slave.

The flash ships in a nice hard case. The package includes a battery, USB-C charger and cable, and a lightstand swivel bracket (with a hole to mount an umbrella).

The flash is a smooth cylinder. The bottom features two standard ¼-20 screw holes for mounting (a tripod plate could be screwed there for on-the-fly mounting). The sides show the vents for the built-in cooling fan and a USB port. The top side of the cylinder shows the optical slave detector.

The front is completely taken up by the circular flash head itself, along with the small modeling light.

The back is where all the controls are located. The screen has a black background with bright writing, which looks nice. Controls are pretty straightforward and easy to master.

The battery can power the flash for up to 360 full-power flashes. It is nominally the same battery as for the company’s V1 flash, but the form factor is actually slightly different, even though they use the same charger.

Turning on the AD100Pro is done via the power button and a roll on the left-side wheel. This wheel is used to navigate menus and is clickable.

The beam size can be adjusted via the Zoom setting, directly accessible with a dedicated button. Settings go from 28mm to 85mm. The shooting mode (TTL, manual, multi exposure) also has a dedicated button. Channels and groups are controlled via yet a third button, and other elements are accessed via the Menu button. Access to the optical slave option is buried in those menus. We would have preferred to see this as a direct option via the Mode button.

Two last buttons give direct control to the modeling light (whose power is adjustable in 10 steps via the scroll wheel) and Test.

In general, menus and controls are logical and easy to understand. The buttons give good feedback and the scroll wheel is a nice element. The designers understand that most of the time, power settings will be controlled via a trigger, and gave direct access to useful settings.

The AD100Pro is shown here with the X2T and the company’s miniature TT350 flash. This highlights the small size of the AD100Pro.

With the right trigger or master flash, the AD100Pro can operate in TTL with any camera brand. This impressive feature makes it very flexible. Of course, for this to work users will need to stay within Godox’s ecosystem; it is not possible to use wireless TTL otherwise (manual operation, as an optical slave, is of course always available).

The X2T trigger which we used for testing has a smaller screen than its XPro, fewer buttons for direct control and lacks TCM (TTL Converted to Manual). It also offers 5 groups instead of the XPro’s 16. On the other hand, it is smaller, offers a “dumb” hotshoe and backlit buttons.

The X2T can also be controlled via Bluetooth. Since the trigger is almost always on-camera, the usefulness of the Bluetooth control is mainly for easier adjustment of shooting parameters. Using a phone’s screen is often more comfortable, and an assistant can tune the light while the photographer is shooting.

Using the GodoxPhoto app is simple and straightforward. Controls are intuitive, each group can be fully controlled individually, elements such as modeling lights can be turned on or off directly. This is a nice perk of the X2T trigger.

Just like the Godox V1, the AD100Pro can accept a variety of accessories.

Godox sells an accessory kit (AK-R1 | $59) which includes gel filters, a bounce card, barndoors, a spherical diffuser, a snoot, a grid, a flat diffuser and gel filters. All of these accessories attach magnetically to the flash and to each other. This makes mounting and stacking very simple. The accessories ship in a case matching the AD100Pro’s case.

The AD100Pro can also be attached to the company’s S2 bracket for easy usage with any Bowens-mount soft-boxes or other modifiers.

In some ways, the AD100 Pro is a strange product. Less powerful than the company’s AD200Pro, with a comparable price, the AD100 Pro can be hard to understand.

With its small size, low weight, large round window and multiple accessories, the AD100Pro is designed directly for photographers on the go. It takes roughly the same volume as a typical 85mm lens and is thus easy to slide in a camera bag. Travelers who want more power than what is offered by a typical speedlight will be well served by the AD100Pro. Portraits photographers who shoot on location will particularly enjoy the compact size.

The quality of fabrication is impressive. The flash is very well made and feels durable. Nothing feels cheap; the included case and accessories are also of a high quality.

One of the main qualities of this flash is the ease of use. Its operation is straightforward and simple. Coupled with a trigger, many photographers will rarely touch the flash controls, apart from turning it on. The mounting holes accept standard tripod plates, so travelers will be able to support the flash with their travel tripod, without the need for a dedicated light-stand.

Even without large modifiers such as umbrellas and soft-boxes, the AD100Pro can be modified thanks to its numerous accessories. The magnetic attachment system is excellent; it just works.

In our experience, the flash has been reliable, operating without fault or missed shots. Its fast recycle time can be a lifesaver in the studio, particularly with subjects who move constantly, such as children. The cooling fan starts and stops automatically; this can be surprising at first, especially since the fan is audible in quiet places.

The AD100Pro is a small, powerful and versatile light source ideally designed for travelers and photographers who go on location. The small size and cylindrical shape are really the standout features of this flash, making it easy to place in a typical camera bag. Despite its moderately high price, the AD100Pro is a worthy new product from Godox.

The AD100Pro can be purchased for about $299 at B&H Photo, Amazon or Adorama.

It’s worth noting that the Godox product line is sold under the “Flashpoint” brand name at Adorama and is fully compatible with Godox branded equipment.

Photographers who have a little extra space may be just as happy with the Godox AD200Pro, also a compact flash, but with twice the power, and doesn’t cost much more. Don’t need as much power? Try the Godox V1, a powerful hot-shoe mounted flash with a similarly sized round head. The V1 boasts roughly 75Ws of power, about 1/2 f-stop less than the AD100Pro, and the Godox accessory pack also fits both of them.