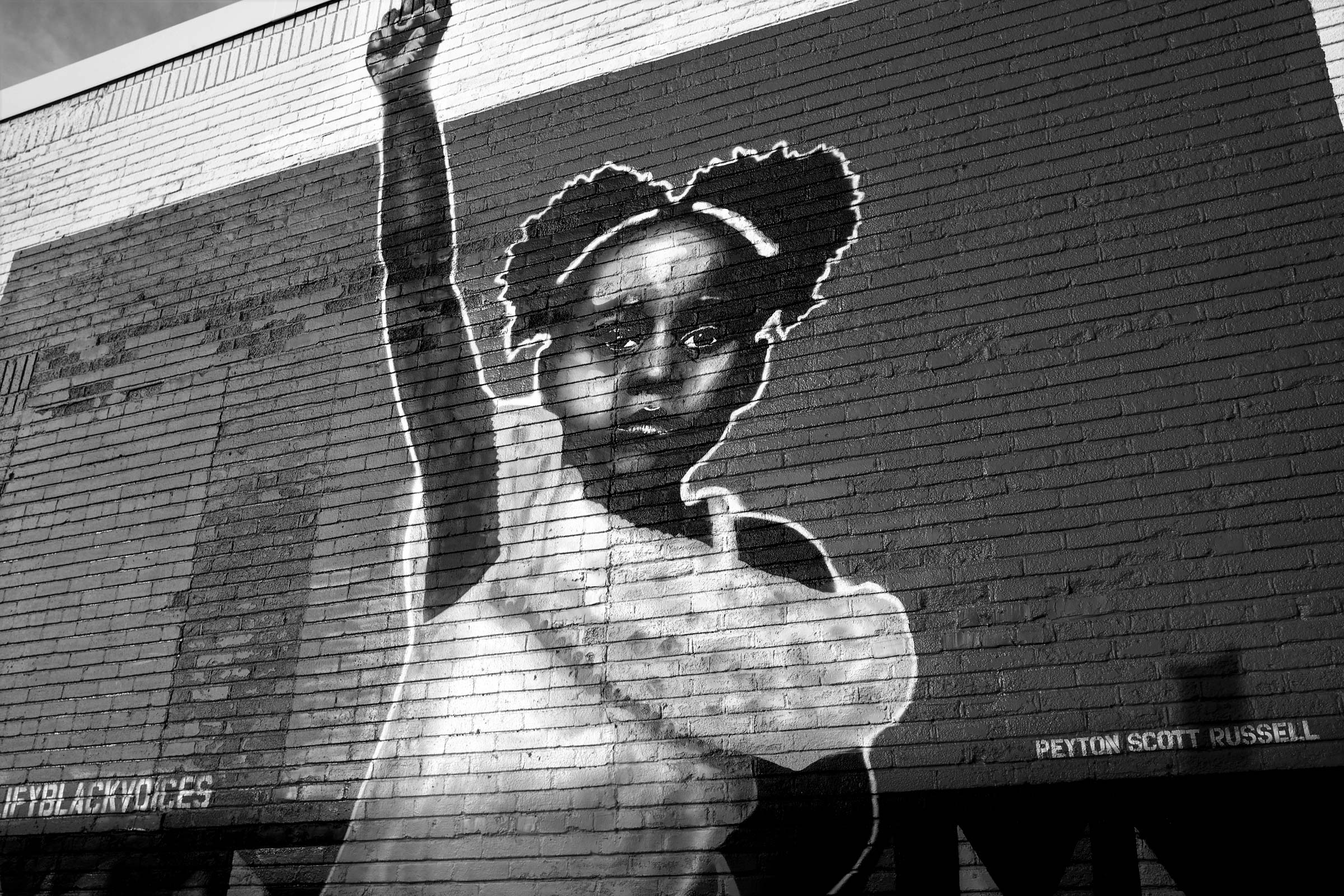 The overwhelming emotions that led to nation-wide protests last year have begun to subside, but many of the conditions that caused them still remain. Cover photo by Julie K. Taylor, painting by Peyton Scott Russell.

It has been six months since George Floyd died near the corner of 38th and Chicago in Minneapolis. Not long after that I chronicled the event in a photo essay, sharing my view of the aftermath of his death in early June, and recently I was compelled to return to this revered place in our city. I encountered a very dissimilar scene compared to what had seen before. It was a chilly day late in November. The sun was brilliant and indifferent to the cold but my hands knew the difference; the frosty air immediately numbed my hands.

The site had been blocked off from traffic on three sides. After I left the car on a side street about a block down, I walked into the enclosure, passing a few people as I walked in. I passed by concrete barricades….one had the word “UNITY” spray-painted on it and the other had the phrase “LOVE ABIDES HERE”, written in bright pink letters. The barricade and messages could be seen effortlessly by the cars rolling by. I passed by a long fence made of wood, with more bright-hued letters rendered raw and loose, as if mirroring the lifestyle of Mr. Floyd, or at least how I have come to comprehend it.

As I continued, I walked down an alley and along the side of one of the buildings – a barber shop that was completely covered in a motley medley of graffiti that jumped off of the walls. I was overcome with the feeling that masses of people had used this area to air their frustrations and pain. While there was very little actual noise – the hum of people chatting nearby, a car door slamming in the distance – this place was reverberating with the echoes of strong voices from the past. They were loud, and louder still in some areas. The statements were an out-pouring of angst resulting from centuries of no one listening or responding appropriately. We still live in a time and place where placating is the norm; truly receiving or hearing is scarce, and the culmination of that obstinate stance is evident here, resonating in these words, these walls, these flowers, these signs, this place.

I found myself in front of the now-iconic George Floyd mural. Six months ago I had to struggle with a crowd to place my feet in a decent spot to take the earlier images; today there was but one gent looking intently at the large mural. The flowers and tributes were now gathered into a small pile in front of the mural; a tiny teddy bear now taking a place of honor. Someone cared enough to share that little bear.

As I rounded the corner I walked up to Cup Foods, the storefront where George Floyd met his untimely death. It is still in operation. I said hello to a few folks coming out from inside. In front of the store there was an area that was roped off. “This is the place where George lost his life” I said in a hush to myself. There were many flowers, gifts, signs and tributes that seemed to go in unending succession. Off to the side I noticed a large image of Mr. Floyd….perhaps about 8 feet high and 10 feet long. These images provide a stark reminder that someone was murdered right there in that place. Those of us who live here still can’t believe this happened in our city. The intersection is called George Floyd Square. If you just stand here and turn your head you will see signs and images that seem to scream “Help! Notice us! We matter too! Why?! Not again! No more! We cannot stand for it, and will not!”

I walked near five paintings, all lined up in a row, neat and orderly; depictions of five martyrs of a new era: George Floyd, Breonna Taylor, Philando Castile, Jacob Blake and Elija McClain. Five humans. Precious, loved, gifted. Five people who did not sign up to be representatives of something beyond themselves. The paintings of these five people whom met such an unfair finality are short and curt, seeming to underline the ephemeral nature of their lives. Their fates: pain-filled and messy, ironic situations. But I know there is much more to their stories.

I am walking through a part of town that we have come to know now as a shrine. There are many stores open, but most are boarded up. At the barber shop, the door was half-opened and the man in the chair smiled at me… a welcome kindness on a chilly day. It warmed me up a bit to feel this cordial outreach. I was encouraged that this shop had remained open amidst such upheaval.

Overall, the sense here is one of such sadness, remorse, and pain, yet I’m also quite aware of a feeling that the deep convictions that were spoken so loudly and boldly here will not fall on deaf ears. Hope is a necessity. I did sense that here on the perimeter, trying to edge its way in. Change happens in tangible and intangible ways. A sustaining transformation will require compromise and cooperation like never before. It may require a change within all of us… yes, all of us.

A Year Has Passed

It has now been almost a year since the death of George Floyd. His death has sparked a worldwide appeal to end the enduring racism in American policing. Perhaps in the unraveling of the tension there is substantive and healing. We can hope so.

Once again I was compelled to visit 38th and Chicago. It was a peaceful morning, with people roaming about. Moving from the memorial covered in flowers and signs then shifting over to the site of where Mr. Floyd died, I saw two women resting on a bench in silence, wearing their COVID masks.

I walked over to the large memorial in the center of the intersection and spotted a gent planting flowers. It was a minute later that he approached me. “Don’t you look nice today” he said. I then said “Thank you, and I must say you look nice too”.

We started visiting. I asked him “Why are you planting flowers?” He said “Because I want to bring joy, faith and love to a hurting world” “There is too much pain here. I want to help,” J. said. “I like your sweater”, he said. “Did you knit that? … You have a great day Julie … Such a pleasure to meet you Julie” Thanks Mr. J., You indeed brighten this world, I thought. A small encounter with a huge impact.

I asked him “Why are you planting flowers?” He said “Because I want to bring joy, faith and love to a hurting world. There is too much pain here. I want to help.”

Perhaps that is a partial remedy in a most elementary way. Find the smallest of good and expand it. It will take time, tenacity and a deep hunger to bring about a common denominator that wills change. There is a vastness to the sea of humanity out there. It becomes so blurred, and hard to define. Yet that mass is made up of individual worth, pain, and beauty. A myriad of experiences, and liberties that remind us that it is not one dominating group that should hold the key to betterment and rest. It belongs to all.