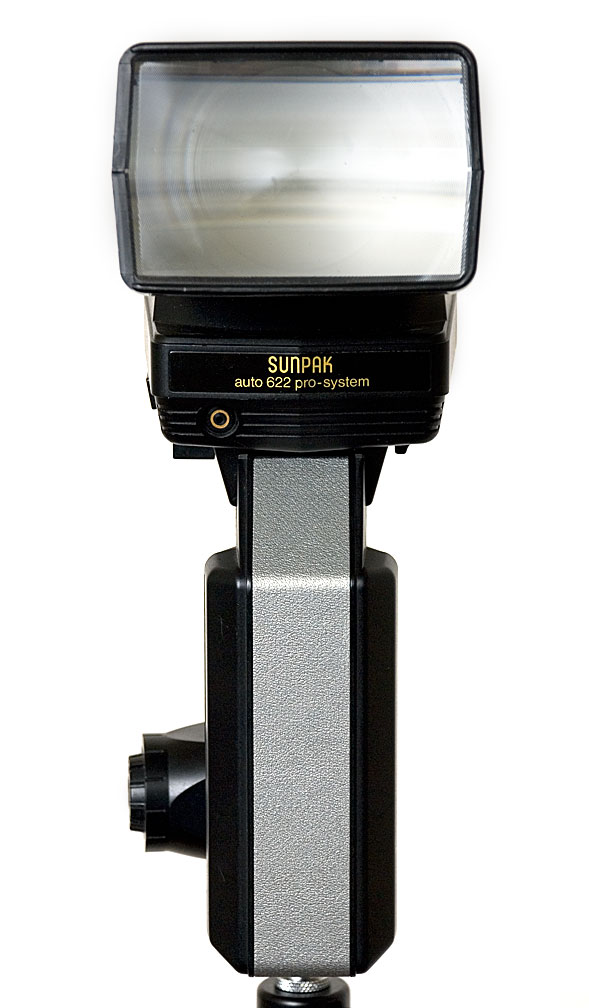 This handle-mount flash dates back to the late 1980s, when it was a very pricey unit… in the range of $600 (and those are 1980s dollars). It still sells at places like B&H for $200 without a head. This is clearly intended for professional shooters that require plenty of power and longevity, such as wedding photographers or sports photographers. I recently purchased my unit for $50 from a guy who claimed that he bought it in 1987 shortly before being busted for cocaine dealing and spending several years in jail… but they can be found on Ebay or Craigslist for well under $50 pretty regularly.

Despite its intended market, the unit does feel a little bit cheap in parts. Although the handle and battery bracket feel good, the zoom head (the only one that I own) feels a little too light. That said, my particular head dates to 1987 and still works perfectly, so perhaps the impression is misleading.

There are several heads available for this unit: a zoom head (manual), a standard, a wide, a bare bulb, an INFRARED head and a ring-light, making it very versatile. I’m keeping my eye out for the light ring head on Ebay… it looks like it would be fun to play with. It can be triggered via a PC sync cord or via a dedicated module that attaches to the camera hotshoe. With the proper module, TTL shooting would be possible, but as far as I know, there are no modules made for modern digital cameras. Mine has a module for a Nikon F3, though I have not tested it. I have not yet found documentation that provides the triggering voltage, so I have no intention of trying it on-camera.

The unit is big. While the reflector area of my Nikon and Canon flashes measure approximately 3.5 x 7 cm, the reflector on the 622 measures 6.5 x 10 cm, over 3 times the area! I’ve seen the guide number for this model (the Auto Pro as opposed to the Super Pro) listed as 160ft at ISO 100, which is impressive, but guide numbers can be misleading. To get a better idea of how this translated into actual shooting power, I set up a light stand about 10 feet from a wall and used my Gossen flash meter to test the output of 3 different flashes: a 300 ws monolight, the Sunpak 622, and the Canon 430EZ (GN 140). The Sunpak and the Canon were both zoomed to their widest setting and the monolight had only a standard 7″ reflector, and all were on full power.

The results were as follows over 3 test readings:

I apologize for the unusual f-stop designations; my meter displays the exposure as the full stop number plus 10ths, so 5.6 .5, for example is simply a half stop above 5.6 (ie, f 6.7). As you can see, the  Sunpak provides somwhere near a stop and a half more light than the Canon, but about a stop and a half less than the monolight.

The Sunpak 622 can be powered several different ways. Most typically it is powered by its own mounted battery pack, which holds 4 C-size batteries (the CL-3 NiCad pack can still be purchased for it, too). With alkaline batteries, the refresh rate at full power is a sloooow 13 seconds, but with the NiCad pack, it drops to 3 seconds! This pack mounts in front of the handle, and can be detached for quick replacement with a fully charged pack. Alternately, it has a power jack to connect to a 510v battery pack (refresh rate: 1 second), or it can take an adapter (Sunpak AD-26) and be plugged directly into wall current. I’ve been running mine off of alkaline batteries, but will get some 5000 or 9000 mAh NiMh batteries to see how it affects the charge time.

[Update : I’ve finally purchased some Size C, 5000mah NiMH batteries and a charger. I’ve only had them for a day now, but it seems impossible to run them dead! They recycle the flash on full power at just a hair under 3 seconds. These are the ones I bought, plus a charger: HERE . Altogether, around $63 for TWO sets.]

Another interesting possibility is that the bracket could also support a second strobe instead of a camera, so if you’re in a situation in which you really need to overpower the sun, you’d have some extra power.

There are two main drawbacks to this unit. While the power can be an advantage, the size can be a problem…. it’s not going to just slide into a fanny pack like a Nikon SB-900 would. Along with the size is the weight. With alkaline batteries, it’s over two pounds.

The second issue is that the controls are not especially easy to read. The displays are obviously all physical rather than digital readouts, and even with the backlight, they can be hard to read because of their small size. I imagine that this will be more of a problem the older you are.

One thing that has come to my attention is that at full power, the duration of this flash is 1/500th of  a second [I’ve since seen this published as 1/1000th not sure which is correct]. This means that if you’re using this flash to stop action, you’ll need to use it at 1/2 power at least, but 1/4 or 1/8th would be better.

I’ve been using this unit for over a year now, and love it! With the addition of the 5000mAh batteries, it lasts forever and recycles quickly, and produces great power when I need to overpower the sun. An excellent Strobist flash, if you can find one (Check Out Current Sunpak 622 listings on Ebay).