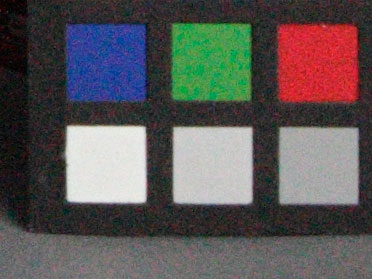 I’ve had a chance to make a cursory comparison between some full resolution photos taken by the new Canon 7D and a Canon 5D Mark II, and the results have not been exactly what I expected. Before I go on to describe the results, let me mention that the 7D in question is a pre-production model, and results may improve (where theoretically possible) by the time that they ship. I’d also like to thank Steve Eastwood at Modelmayhem for providing the images.

As I mentioned in my previous discussion of these two cameras, the overall pixel count difference is minimal in terms of final print size, but because the 5D Mark II has a full frame sensor, it has a much lower receptor density (about 156 receptors per millimeter) compared to the 7D (about 233). Even though it may seem that higher resolution on the sensor would lead to sharper photos, we should not expect this to be the case in practice because even our best lenses offer a lower resolution than the 7D sensor, and therefore the sensor’s extra resolution will not be capturing extra detail.

If this concept is hard to grasp, consider this scenario: suppose that you have a fixed focal length lens (say, a 100mm) on your 5D and you set up an object on a table in your studio so that, with your camera on a tripod 10 feet away, it fills the whole frame.  Now suppose that you put the lens on a 7D and place the camera on the same tripod. Of course, the object won’t fill the frame any more, it will be cropped. In order to fill the frame the same way (or as close as possible), you’ll have to back up a few feet.  After backing up a few feet, you’re now using less of the image that would be produced by the lens on a full frame camera to create the same photo, which also means that you’re magnifying the lens’s flaws.

Figures A and B are from a little less than 1/4 of the distance across the frame horizontally. This means that on the full frame sensor of the 5D, this is getting near the edge of the frame, which we’d expect to be a bit less sharp. On the 7D, this is using a more central part of the lens, so any lack of sharpness is less likely to be related to optical problems with the lens.

As you can see, however, the 5D is still sharper, though not by a tremendous amount. The difference is most noticeable in the “www” text below the logo box. Since the two images were shot at 3200, noise is also a factor.

Figures A and B display a significant amount of digital noise, but in each case, no more noise than a CCD equipped camera would have produced at ISO 800 a few years ago. The question, however, is whether there is a difference between the cameras. At ISO 3200, there is remarkably little difference. This is counter to my initial predictions, and counter to conventional thought that suggests that denser sensors produce more noise. I’d still give the edge to the 5D Mark II, but I wouldn’t consider it enough to be a deal breaker.

At ISO 6400, the difference is more pronounced. Sample images are below.