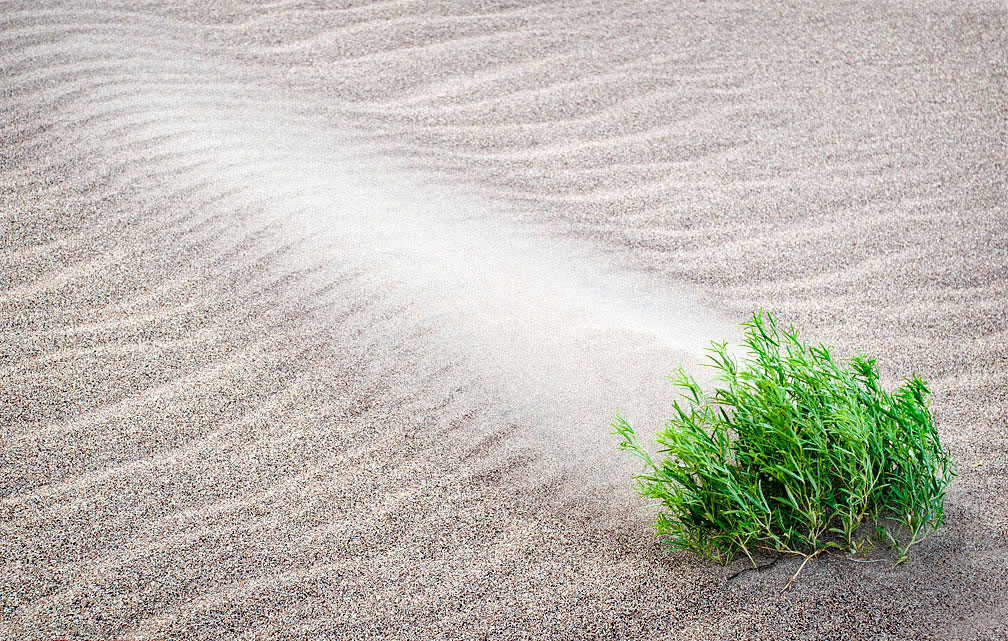 A miniature dune forms on the leeward side of a plant.
Landscape
·3 min read

If you’ve been following my recent photo expeditions, you’ll know that I left off my narrative in Oregon at the Sand Dunes National Recreation area. I had gone to shoot the dunes, but found cold, overcast, drizzly weather instead. Soon afterward, I headed home to regroup, and then headed East, through Washington and the Palouse, Idaho, Utah, Wyoming, and Colorado.

While in Colorado, I decided to pick up where I left off with the dunes in Oregon, and headed down to the Great Sand Dunes National Monument, home of some of the most expansive, highest dunes in the nation. I’ve visited before, and loved how the dunes are situated; there’s a broad flat plain to the west, and jagged snow covered peaks (in the Spring) to the East. This means that there can be very pretty sunrises over the mountains, and the sun gets very low in the sky in the afternoon and evening to create beautiful shadows and shapes in the dunes.

That is, when it isn’t cloudy and raining.

Before I left the Boulder, CO area and headed south for the dunes, I checked the weather report. I was interested in clear skies, but more importantly, I was looking for as little wind as possible. If you’ve ever photographed in dunes, you’ll know that it’s impossible to keep the sand out of your tripod no matter what, but if it’s windy, you’ll get sand in your lens rings, your camera buttons and dials, your bag, etc. There isn’t enough sealing material in the world to keep sand out on a windy day. The weather report claimed that I would find very light wind, clear skies, and highs in the low 70s, which seemed perfect.

When I arrived at the park entrance (around 4 pm), though, the sky was cloudy, and there was a chill in the air. It might have been in the 60s, but it felt more like the 50s. I knew immediately that I wasn’t going to get the kind of shots that I had come for that day, but I thought that the cloudy skies might give me some more dramatic moods, so I put on my backpack and headed out into the dunes.

For the first 15 minutes or so, the sun would occasionally break through the clouds and give me dramatic lighting, but not usually long enough for me to compose a shot. Then the wind kicked up and the clouds grew heavier. I kept hiking along, looking for interesting details and patterns, with the hope that the light would change again, but it did not.

After I’d been on the dunes for an hour or so, the wind had grown so constant and cold that my inner ears began to ache, and I felt the first few drops of rain. I found part of a paper towel in my pocket and tore off little bits to wad up and stick in my ears. It worked nicely for keeping my ears from aching, but I couldn’t hear a thing… it sounded like the roar of wind on a microphone for the rest of my walk back to the car.  By the time I reached the car, there was a steady drizzle and getting too dark to think about photography anyway, so I camped for the evening, hoping for better luck the next day.

But I awoke to more rain. Intermittent, but coming from a solid blanket of clouds. I headed back towards the dunes, and thought that I’d try photographing them from a bit of a distance from the western plain. I took a brief walk out into the plain, and found several attractive trees and numerous wildflowers, but the light was too flat for my tastes. I took a few shots, and then the rain started pouring.  I shielded my equipment as much as I could with my body (just in case, though it probably would all have been fine) and was dripping wet when I got back to my car. With that, I decided it was time to move on to Arches National Park, and come back to the dunes another day.