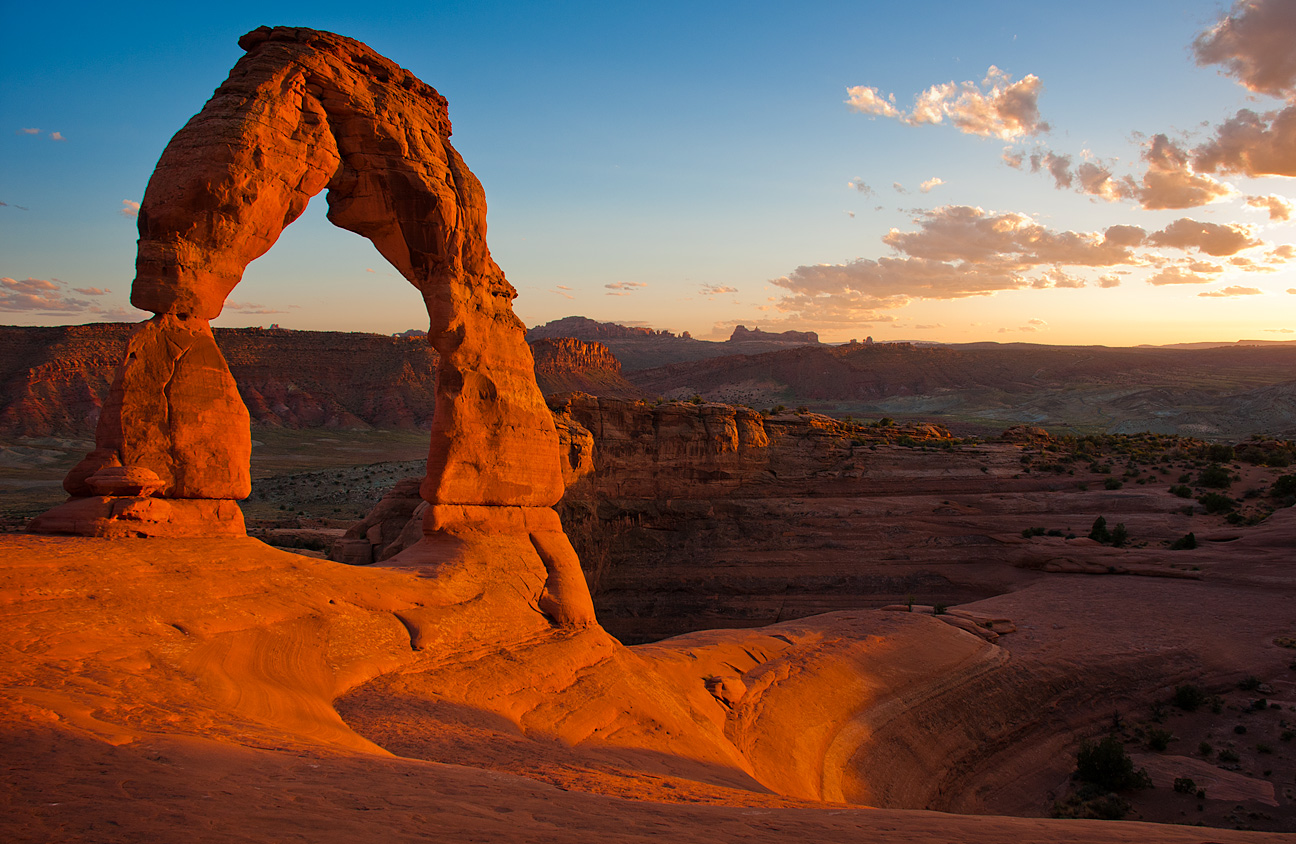 The day after leaving the Great Sand Dunes National Monument, I woke up in Dove Creek, CO to a warm, sunny morning and a sky full of puffy white clouds. The road to Moab was almost empty, and I was at the entrance of Arches National Park, just north of Town, by lunchtime. I stopped and filled up water jugs at the visitors center, and then headed up the road into the heart of the park.

My first stop was Park Avenue, a scenic trail through a canyon with a spectacular view of rock walls, scrubby trees, and stone towers. This was beginning of a problem that I had throughout the rest of my trip: there was something gorgeous everywhere I looked. If I explored the germ of every photographic idea, if I worked every shot until I was satisfied that I’d gotten a great shot… I never would have made it 100 feet from the car. It was overwhelming. So instead, I did the worst thing… I didn’t truly explore any of them. I mostly took snapshots all day long, waiting for the effect to wear off. I ended up hiking, almost non-stop, until well after dark… somewhere around 8 hours. This, I discovered the next morning, was a mistake after spending much of the previous weeks in the car. But it was a very enjoyable afternoon.

After Park Avenue, I went to the Double Arch area, and dutifully walked the trails to each arch on the map. I snapped photos of the Turret Arch, North and South Windows, Double Arch, Cove Arch… and looking back at my photos, I’m amazed that I didn’t get bored with it. My pictures show one rock arch after another in harsh afternoon light… and with few exceptions, the pictures are poorly composed, and the subjects seem generally lifeless. But at the time, I was still overwhelmed… I was loving every minute of it. It was beautiful, and wholly unlike anything that I grew up with in the Pacific Northwest.

About an hour before sunset, I decided to take the trail to Delicate Arch, probably the most iconic spot in the park. It was a Tuesday evening in September, and I passed a few people on the trail, but it was mostly quiet walk of about a mile and a half. The last fifty feet or so of the trail is a smooth ledge cut into the side of a cliff. When I reached the end of the trail, I turned right stepped up onto a small ridge.

What I saw astounded me. It was a horseshoe, a large natural amphitheater, and absolutely packed with people. At least, the edge nearest the trail’s end was. To my left, a crowd of perhaps a hundred tourists stretched halfway around the bowl towards the arch. There were families on blankets and couples cuddling, and some Europeans uncorking bottles of wine. To my right and up the ridge, on a few step-like rock platforms, was the crowd of photographers. This was also something that I started finding at every park that I visited. They were clearly professionals, or at least extremely well funded amateurs, judging by the prevalence of high end camera bodies, Gitzo tripods, and in one case, a $9000 Nikon 400mm f2.8 lens. And yet, there they were all crowded together (there must have been 20 of them or more), all taking the same picture. Pathetic, I though. Even putting creativity aside, what kind of market could there be for a photograph that has been taken so many times? I just don’t see the point.

What’s worse, though, was their behavior. Across the bowl was the arch itself, and of course there were droves of tourists who wanted to have their friends take a picture of them under the arch. As the sun started getting low, when a tourist would approach the arch the photographers would collectively begin to grumble, and then start shouting “Get out of the way!” In a national park, to other people who had paid the same $25 entrance fee! I was equal parts disgusted with them and embarrassed that onlookers might include me in their ranks. I admit that I stopped for a moment to see if there was something incredibly special about that vantage point. But it was nothing special, so I turned and started the walk around the ridge to find something that was, if not better, at least my own.

I camped that night near the Needles Overlook, well to the south of Moab. When I awoke, my joints were sore. It seems that I had strained something in my left leg, and it made walking pretty uncomfortable. I briefly considered taking the the off and hanging out in a coffee shop editing photos, but decided instead that I’d just take it easy on the trails. So, I went to Landscape arch, and Navajo arch, and several others… and they were all pretty, but I’ll admit that the pain affected my attitude. I’d round the corner to another arch and say “Yep, there’s another rock” or “Hmmm, that looks like a giant…”.

When I made it back to my car, I decided enough was enough, and I took a few hours to relax and read a book, and dig some ibuprofen out of my first aid kit. The end result was that around 5pm, I found that I wanted to take the hike up to Delicate Arch again, but this time, climb down into the bowl and shoot along the north edge up into the arch. My other idea was to stick around until after nightfall and take pictures of the arch against the night sky: the high elevation and low population of the area make for very spectacular nights.

I headed up to the arch earlier than I had the previous night so the crowd was not yet convened. As I hiked around, I noticed that another group of pro photographers trickled in and took up their seats in the same spot to the right of the trail’s end. They were not so unruly, I’m happy to report. I found a gorgeous spot from which to photograph along the pitted sandstone wall. The lines in the stone were wonderful, and the holes and divets made wonderful textures in the foreground. Unfortunately, I was not properly equipped. The widest lens that I was carrying was the wide end of an 18mm zoom for the Nikon D300s. (I was also carrying a medium format, but with nothing any wider) The Nikon 10-24mm would have been perfect.

After sunset, I climbed back up to the arch and started deciding where to set up my tripod. As soon as the sun was down, people scattered very quickly. There were two guys hanging around waiting for the stars to come up and chatting about some sort of charity work in Africa, but it was remarkably quiet otherwise. I got out an LED flashlight that I had brought along and starting getting prepared, and started trying to figure out how I was going to focus. Someone behind me said, “Have you been here since sunset?” It turned out that there was another photographer with the same idea. Sometimes it’s extraordinarily annoying to have another photographer show up right when you’re preparing to shoot, but in this case, it was a pleasant surprise. I’d been alone for days, and it was nice to have a bit of company, and we talked and shared ideas. He introduced himself as Paul, and he was British but living in New Jersey  and traveling in Utah for business. He was shooting a Canon 7D and had brought along a more powerful flashlight and a red gel for painting the arch with light during the exposure.

I tried both shots: with my bluish LED flashlight on the arch, and with Paul’s red gelled light. The red was very striking against the dark sky, but beyond the initial impression I thought that it was a bit garish. My own light was cleaner, but just not very bright. More importantly, though, neither flashlight nor the combination of both provided enough light for either of our cameras to autofocus, and it was too dark to see anything through the viewfinder. In fact, it was dark enough that I really have no idea what Paul looks like. But I did enjoy taking the shots, even if the results are nothing to write home about. We then took an unusually long and circuitous short-cut back to the trail-head, guided by Paul’s GPS, and parted ways.

I thought that I’d check out Canyonlands National Park the next day, since it’s just up the road a few miles.