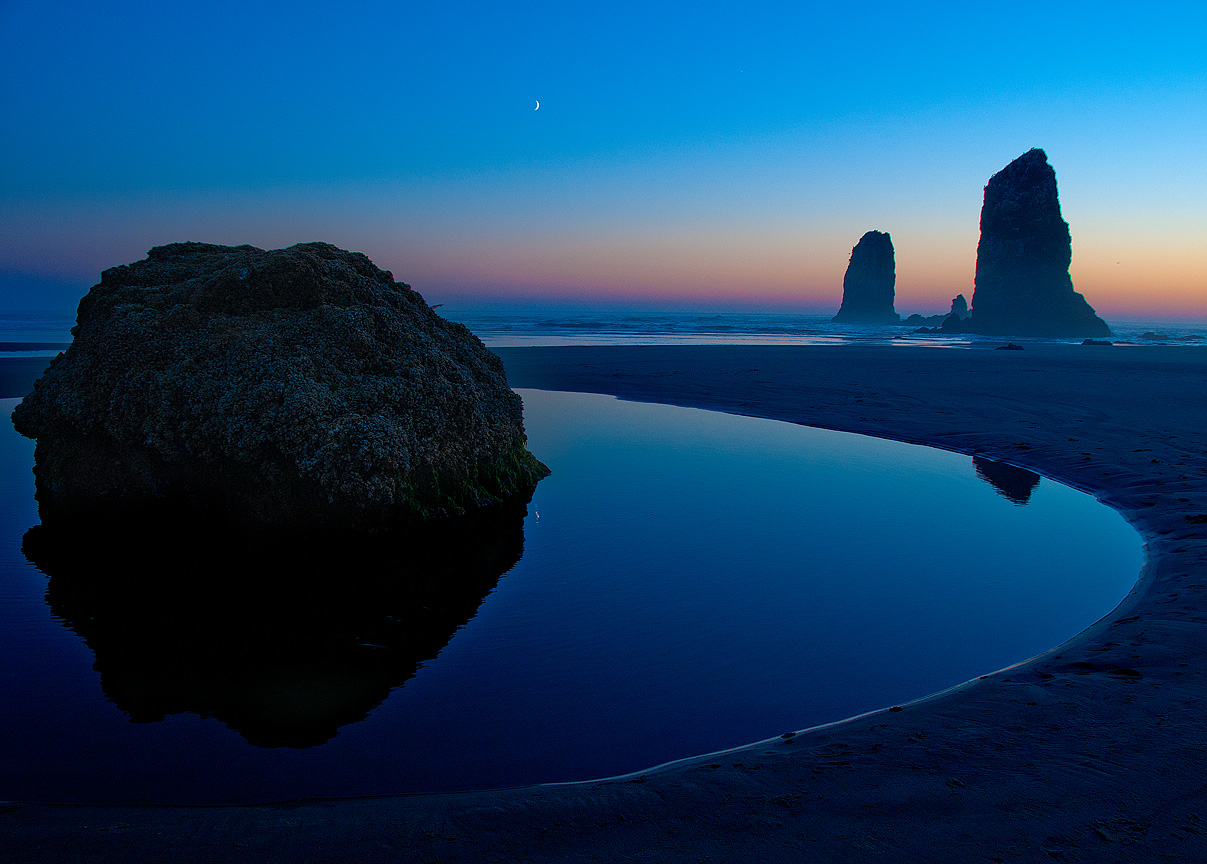 The Olympic Peninsula and Oregon Coast

I started this trip on a Tuesday, and then again on a Wednesday, due to an early equipment failure… I’ll probably be replacing my dead old Nikon with a Canon, though I’m still deciding which model will best fit the gap. In any case, I drove up to Whidbey Island across Deception Pass, and down to the Keystone Ferry. The crossing to Port Townsend was beautiful: sunny and warm, but with enough clouds in the sky to keep things interesting.

From Port Townsend, I continued along Highway 101, past Lake Crescent and through the forests and Forks, WA (now full of Twilight-related tourist kitsch) and made it to Ruby Beach a few hours before sunset. I had been hoping for some pretty evening light on the sea-stacks there, but about 10 miles from the coast I drove into a bank of low clouds which hung over the area for the rest of the day.  Sometimes low clouds and mist can be interesting too, so I grabbed my tripod and headed down to the beach anyway, but found that the light was so flat that it seemed to such the color out of everything.

My first thought was simply to start shooting for black and white, and I took a couple of shots that I thought might look good in monochrome, but then I started to search for elements of color that I could highlight against the grey backdrop. 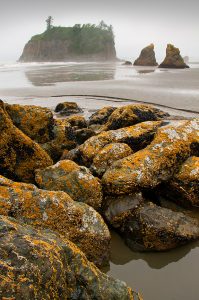 A purple starfish seemed like a good place to start, but it’s location didn’t lend itself to a very strong composition with the equipment I was carrying. Then I noticed what appeared to be orange lichen, probably an algae, on some of the nearby rocks, and did what I could with it. As I headed back towards the trail to the beach, I saw that there were several other photographers standing around with tripods, looking disappointed at the light. I waved to a couple of them and headed out to a nearby campsite. 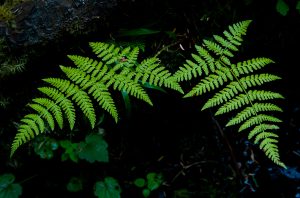 In the morning, I started trekking around the DNR land south of the Olympic National Forest, but didn’t find any particular location that grabbed me. Around noon, I decided to head into the Hoh Rainforest, and started to take a short hike along the main river trail. I bumped into a photographer heading the opposite direction on the trail and recognized him from the previous evening at Ruby Beach, and stopped to chat for a moment. He recommended that I hike to a waterfall about 3 miles up the trail, which was where I was already headed. It was an unusually dry and sunny day in the rainforest. As a result, the colors weren’t as saturated as they would have been after a little rain, and the bright sunlight caused big areas of blown-out highlights in contrast to the darker areas in the shadows of the rainforst canopy… which made exposure tricky. I started bracketing for HDR. 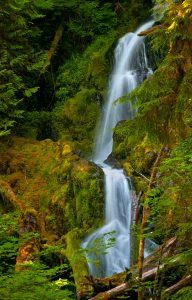 The waterfall itself was typical for the area. It was surrounded by bright green moss and ferns, which is pretty enough if you haven’t spent much time around them… but it reminded me very much of what I found in the woods where I grew up to the East, on the Seattle side of the Puget Sound. I took the standard shots, but was a bit disappointed and decided I’d much rather move on to something a little different. As I drove out of the park, the light of the low sun started to create dramatic lighting in the forests along the road, and I found myself stopping more and more frequently to capture the warm light on a stand of aspens along the river, or highlighting the moss dripping from the forest evergreens. 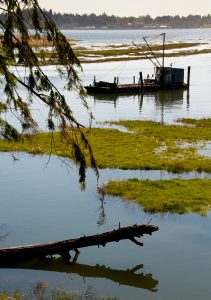 I spent the night at another nearby campground, and decided in the morning that I’d enjoy a drive down the coast through Oregon. I had intended to reach the Oregon Sand Dunes recreation area at some point during the trip, and it seemed like a good time to head that direction. I took my time driving down the coast, stopping frequently to look at the scenery and poke around. Passed through the wonderfully named town of Humptulips. The drive along Willapa Bay was gorgeous, and I stopped to take numerous photos, but the harshness of the afternoon sun didn’t do me any favors. I thought for a while about stopping and finding a place to stay so that I could wait for the right light, but in the end, I decided to move on. I’ll have to go back, one of these days, and spend a couple of days in the area. 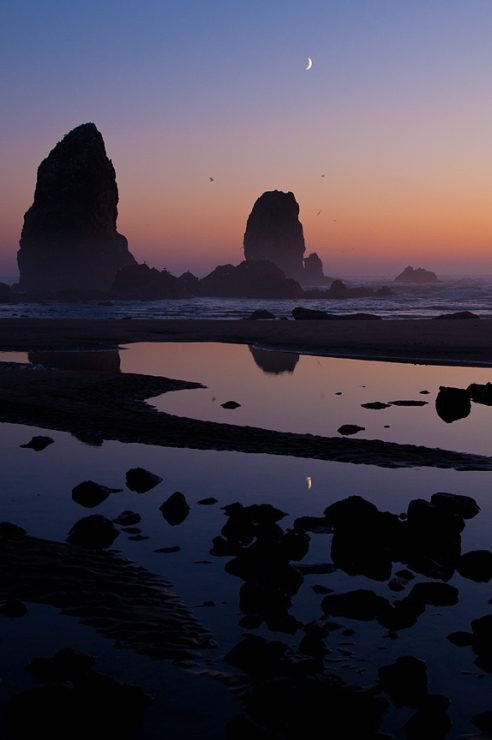 Around 8pm, I found myself passing out of Seaside, OR and into Cannon Beach. It was a beautiful evening, and I thought that I’d just go sit on the beach for a while and relax. I grabbed my camera and tripod as an afterthought, and wandered out onto the beach.

As usual, the sunset was beautiful over the ocean, and Haystack Rock is always an interesting element. In this case, though, what really made the difference in the photos was the moon… just a little sliver of a waxing crescent. Unfortunately, I had only brought one lens and a tripod, but no cable release and some of my shots were blurred as a result of camera movement. Still, I was happy with what I did manage to get.

That night, I stayed at a campground down the coast, and drove in the morning to Florence so that I could start exploring the sand dunes. I’d visited the dunes a couple of times previously, and I’d always meant to return and spend some more time. This time, though, the weather didn’t cooperate. It drizzled throughout the day, and the sky was overcast. Good photos of patterns in the dunes really require the strong contrast of direct morning or evening light, so I decided to explore some of the surrounding area. The dune grasses along the coast attracted my attention, with their wind-blown patterns, but they generally worked better in black and white with the flat light.  That evening (Saturday), I spent in a cheap motel in Florence and had the worst night’s sleep of the trip (for all of the reasons you’d expect from a cheap motel)… but I was at least able to charge all of my equipment and use reliable internet service.

The account of this expedition continues in: Stonerose, The Palouse, and Idaho 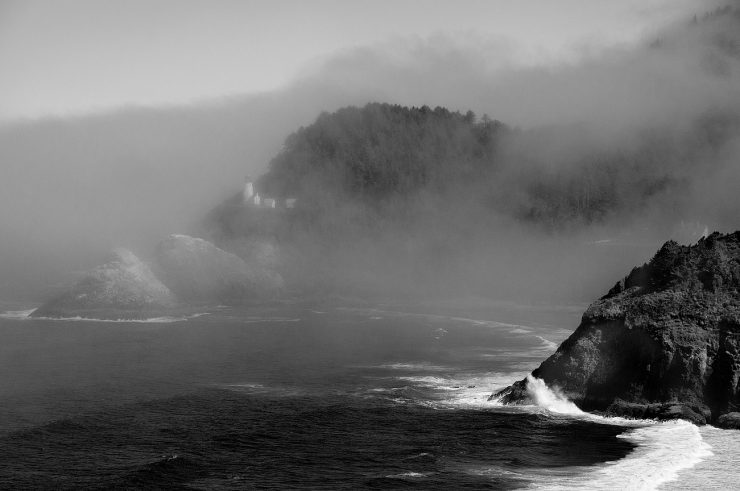