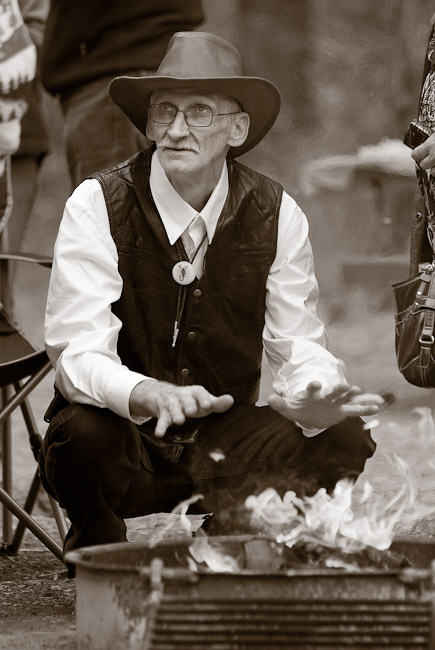 The father of the groom (and best man).
Weddings and Portraits
·2 min read

Every wedding has its quirks… they’re all a little different and usually a little odd. This wedding, which I shot near Missoula, MT last October was no exception. But lest anyone get the wrong idea… the people involved were absolutely wonderful. The wedding was fun and comfortable, and generally enjoyed by all.

In fact, the even the trip there was beautiful. I stopped several times along I-90 on the way from Seattle to take photos of the beautiful fall scenery. The drive back was equally enjoyable… for the opposite reasons… but I’ll get to that later.

The wedding was scheduled for early on a Saturday morning, outdoors at state park known as Fort Fizzle. If you’re familiar with Montana weather, you’ll know that October mornings are cold, so the pre-ceremony breakfast and coffee were served around a series of camp fires and standing propane heaters.

If the appearance of the guests hadn’t already tipped you off, the ceremony was very informal. This became particularly clear when the bride appeared in a camouflage dress, walked down the isle by her father, also dressed in his hunting garb ( I wasn’t surprised to learn that he went straight from the wedding to his favorite hunting grounds… it was bow season, after all). The arch of the altar by the creek was decorated with orange fall foliage and painted… camouflage.

Following the ceremony, the guests warmed their toes around the fires. There were the usual toasts, and the reception ended with the departure of the bride and groom for a flight to Hawaii.

I, on the other hand, prepared to drive back to Seattle. Not far beyond Spokane, though, I noticed warning lights on I-90, so I tuned in my radio to the AM station indicated by the signs. A dust storm, I learned, had closed the freeway for the foreseeable future. I’d never heard of such a thing in WA, though for all I know it’s commonplace east of the mountains.  So, I stopped and had an early dinner, hoping that it would pass… but it didn’t.  I didn’t want to get stuck in a dust storm, but I also didn’t want to spend any more time than necessary at the truck stop where I was waiting, so I headed north on some back roads along the edge of the storm up to highway 2, hoping that I could make it over Stevens Pass. 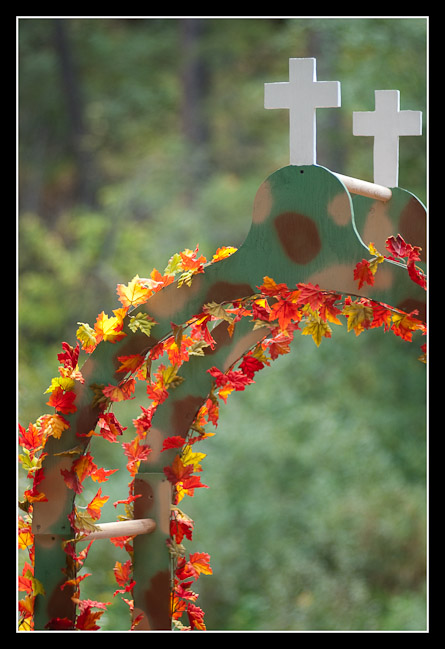 I’ve never seen anything quite like that dust storm. Where I crossed into the edges, the sky was dark and brown, and the air was thick with the fog-like dust. When I looked into the storm from the outside, it was really quite pretty… with the forms of the farm buildings and rolling hills appearing and disappearing with changing air currents. I was tempted to stop and take photos, but my windows were so dusty that it would have been pointless to do so from within the car, and exposing my camera and lens to all of that dust outside would have been even worse.  By the time that I reached Highway 2, though, the dust had subsided, and I was treated to a gorgeous sunset drive on the way home.