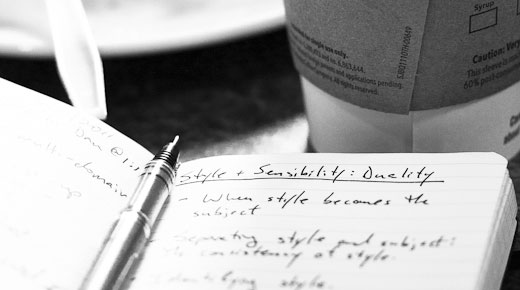 This article is the second installment in a series on “Style” by Alfred Lopez. To get caught up, you can find the first article here. If you’re reading this article via Email, RSS, Google Reader, or another proxy service, you can ask questions or leave comments by visiting the article in situ, here. 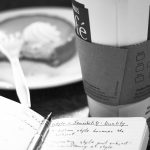 [I] know that Light and Matter is about photography, but bear with me for a moment while I set the stage for this next notion of style. So get some coffee or tea and a crumpet and let’s get started.

In music, there is the notion of a subject much like that found in photography or other art forms. A subject, regardless of the art form, is the central theme of the work. An artist can stylize the subject by directly affecting it or by adorning it. To illustrate, let’s look at something quite common.

Consider this subject by Bach (actually, it’s currently been attributed to another composer):

I’m sure some of you have heard or played it at school or at the mean piano tutor’s home that your mom sent you to. It’s not important that you know how to read music because what comes next will be very apparent. Some 200 years after Bach’s death, two learned songwriters decided to write something “new” and came up with the following:

The pitches and intervals between the notes are the same as the “Minuette” because it’s the same subject (they fessed up later). The difference here is the meter was changed to 4/4 from 3/4, which sounds like a waltz, to match the style of music in the 1960’s. This altered one property of the notes: duration. This method of styling directly affects the subject. So the subject started as a Waltz and later was styled as Rock n’ Roll. Now let’s consider a different example:

This is the original subject of the Recorder Sonata in F by Handel as Handel wrote it (Handel was the guy who wrote the “Halleluia Chorus” and the “Royal Fireworks”). This subject as with the previous one “by Bach” is written in a very simple form. This was the style of most composers in the Baroque era. The simplicity allowed baroque musicians to interpret the piece to their liking. When I first listened to this piece as played by the awesome flute and recorder player Hans Martin-Linde, I wasn’t aware of this baroque trivia (still a kid those days). This is what he played:

This is quite different from the original. This style adorns the subject. The original subject is intact; even more so than The Toys’ version of the Bach minuette, though it may not seem that way. Here’s a side-by-side comparison:

The red notes in the adorned version matches the timing and tempo of the original notes. As you can see, they line up vertically. If we remove the adornment, we get back the original subject.

So why the music lesson? Because this is what I identify as “duality”: when style and subject are not apparently two distinct things. Since I wasn’t aware of both baroque style nor the original subject, what I heard was the subject as far as I was concerned. I didn’t have the style and sensibility of baroque playing then. Now, when I listen to baroque music, I can identify what is the adornment and what is the subject, not because there is a formula, but from experience: knowing the composers’ and the performers’ style.

The point here is awareness. With awareness (and some experience), one can develop their own sense of style and appreciate (or shun) others’ styles.

Let’s get back to photography…

[I]n the last article, I touched upon what style is, in a general sense, and how it influences the interpretation of a subject. I also mentioned that the subject itself is irrelevant, meaning that any subject can be styled. How you style a subject depends on your style sensibility. I avoid the term “your style” because it locks an artist to one thing. This is not to say that no artist executes style in only one way. It’s meant to allow the artist more freedom with style. You may wonder how can one identify an artist by style if they can choose to execute style in any way? Well, every artist, no matter who, has a trademark style that they always employ. Almost like watermarking their artwork. This is unavoidable. Even Edward Weston, who at one point decided to capture the “true essence” (so to speak) of his subjects had a trademark (one of many, actually): all his photos were super sharp. At least, that was his intent. He brought everything into focus by using very small apertures. The subjects were different, in different states, environments, poses, etc. (thus, employing different styles), but one common factor in those photos was super sharp images.

So now let’s look at some photographic examples of these two aspects of style. This next photo (original) was taken recently in a sports bar as one of many publicity photos for a friend of mine:

I wanted to give this photo a more dramatic look. So I turned to photographs of the jazz clubs in the 1950’s and 1960’s where certain features of the musicians were lit more than others. Here’s what I came up with:

Here, I directly affected the subject. I could have done this physically (pre-production with carefully placed lighting) or in Photoshop (post-production). There may be slight differences in either approach, but the style itself, the interpretation, would be the same. As with the minuette, the attributes of the subject changed. Both photos may look the same, but they are different by attributes (color vs b&w, lighter vs darker, etc). The subject is being interpreted differently than its natural state.

This next photo is an example of adornment:

The subject here is simply adorned with rosary beads, toe ring and design on the pedicure to give it a little more novelty, but for the most part, it’s just my wife’s (very pretty) feet. This is the approach that fashion photographers will most often use. Their subjects are always adorned and the picture is taken literally. The subject itself conveys the interpretation as opposed to being interpreted. If you remove the adornment, you get the original subject.

This photo is further styled. I used a selenium tone as well as softened the look. My additional styling decision was based on considering the adorned subject as the subject, which demonstrates the duality of style: the style can become the subject. Just think of it in terms of layers in Photoshop. Each layer applies a style to the previous layer; acting on it as a whole, until you get the results you want.

I hope that I’ve managed to convey my seemingly obtuse definition of style so far. The next set of articles will highlight other facets of style. These are not to be confused with different styles, but more like building blocks of style. You can use as many or as few of the blocks to create your own sense of style.