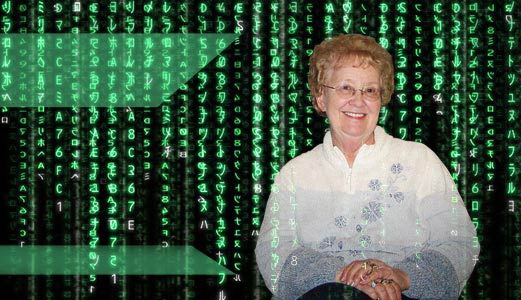 Getting Mom to Use A Digital Camera

At first it might seem like a daunting task followed by months of tech support questions, but it doesn’t have to be that way.  At 73 years old, my mom doesn’t exactly fit the demographic Canon and Nikon are targeting, but after reading this, they just might start.

My Mom has never worked in a tech field, or even had an interest in electronics or gadgets, so it’s no surprise when her friends look puzzled when they hear that she catalogs her digital photos, orders prints online, and puts photos on her digital frame.

So what’s the trick to making all this happen?  Setup.  Plain and simple.

Several years ago I got a new camera and decided to give the old one to my Mother.  She was very hesitant at first, but I assured her she could do it.  Pretty much anyone can take pictures, the difficult part is what comes next.  Getting them from the camera to the computer, fixing red-eye, and printing them out are all things I do without thinking twice.  I just needed to come up with ways for her to do these things.

The first order of business was to tackle getting them to the computer.  The solution was easy; an Eye-Fi card.  For about $40 you can get a 4GB SD card that will wirelessly transfer photos from your digital camera to your computer.  It does require a wireless network, but she already had one that came with her internet service, so no deal breakers there.

Setup of the Eye-Fi card can seem tricky until you understand how it all works.  After installing the software you setup a free account and add the card to it.  With the card plugged in to the computer, you configure it by connecting it to your wireless network and deciding where on your computer the photos will go.  There are other settings available, but these will get you started.  After adding the network, eject the card and place it in the camera.

Next up was viewing.  With the Eye-Fi card copying photos to date-based folders under a single “pictures” folder, I used Picasa with its folder monitor setting configured to watch for pictures.  With Picasa set to “Scan Always” it will find new pictures as they arrive in the folder, or the next time you open the program.

The next hurdle was printing.  There are picture frames in nearly every room of her house and I knew if she was only able to view them on the computer, the camera would sit around collecting dust.  Luckily, Eye-Fi came to the rescue here again.  With an ever growing list of supported photo sharing sites that included Walmart and Shutterfly (with local Target pickup) Eye-Fi once again saved the day.  Simply configuring the Eye-Fi Center software to automatically upload her photos to Walmart meant she just needed to visit Walmart.com when she wanted to order prints.

So what was left?  Quite a bit actually, but none of it was difficult.  I knew if I stopped there, I’d get phone calls with her having problems logging in to Walmart to order prints.  Eye-Fi couldn’t help me out here, but LastPass could.  I setup a free LastPass account for her and put her 4 or 5 login and password combinations in.  With it set to never logout, it not only filled in her login and password if she happened to log out of Walmart, it also added a layer of security by not filling in her credentials if she clicked an email link containing a phishing attempt.

Last up was backups.  I needed something so simple, she wouldn’t even know it was there.  Having used Crashplan for my own backups, that was another no-brainer.  Free backups to a local drive or extremely cheap unlimited storage backups to their online cloud (Crashplan Central) made perfect sense.  I pointed it to the pictures folder Picasa was monitoring as well as a few other folders; including the Picasa database folder.  De-duplicated, compressed backups have been silently running ever since.

And that’s about it.  Start to finish, the entire setup will take a couple of hours, but the outcome is priceless.  She now takes pictures, orders prints online, emails them to friends, and even shares a few on Facebook from time to time.  The bonus is noticing a picture hanging on her wall and hearing her say she was the one to take it.

Without going into all the details of how each piece was setup, here’s what I used: