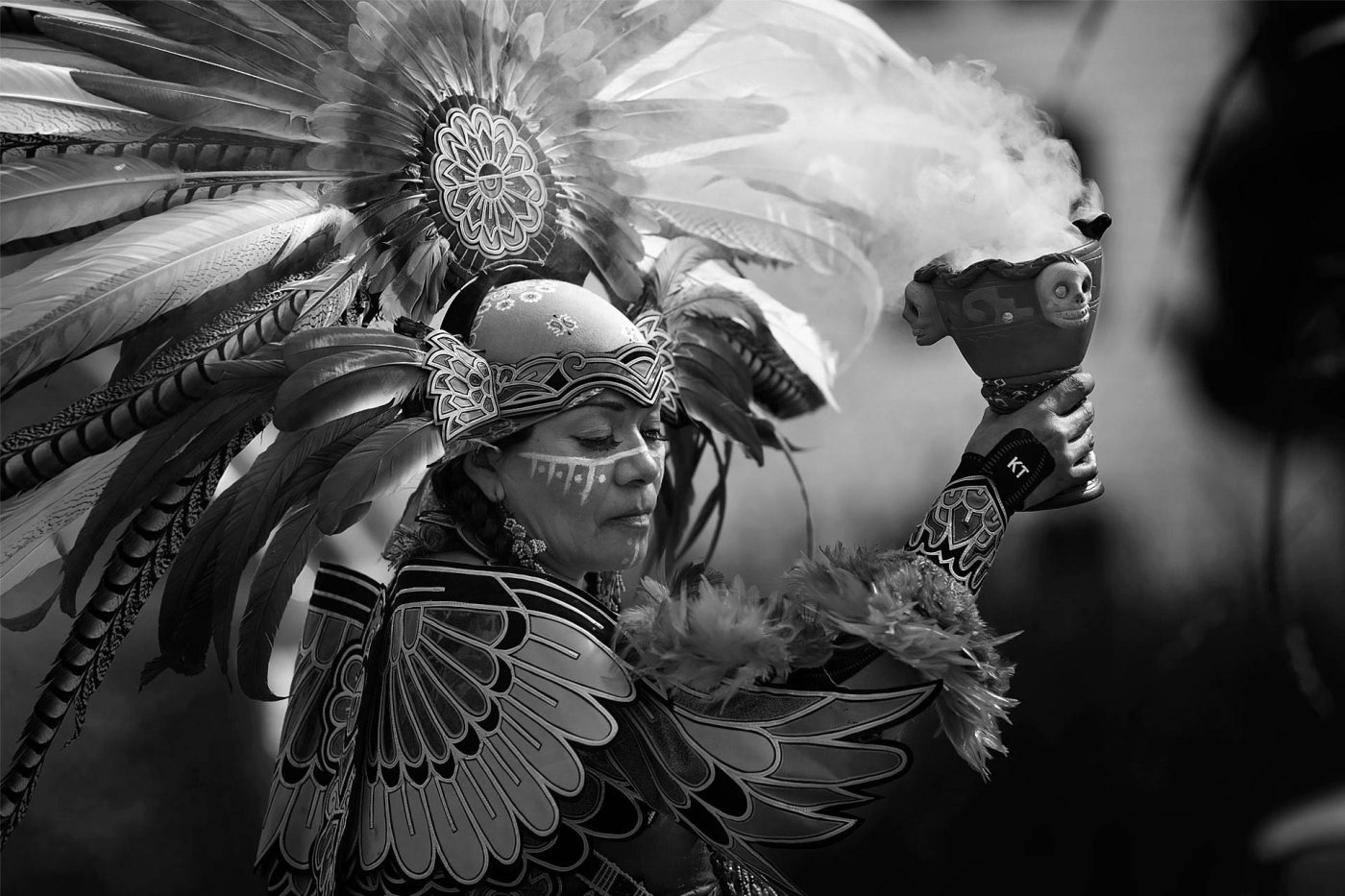 At 2:00PM I strolled onto the green of Judkins Park in Seattle’s Central District and was disappointed to find that the crowd was much smaller than on my previous May 1st visit. As usual there were small bands of protesters carrying signs, individuals handing out fliers, wizened hippies wearing peace buttons, necklaces and cynical expressions, and about half as many people (it seemed) roving among them with video cameras and microphones. Flowers were passed out, and various legal and illegal substances were passed around. There was free food for the brave.

After a string of speakers (including at least one “spoken-word” piece), Seattle mayor Ed Murray showed up, though his brief comments were drowned out by boos from the meager crowd, and then it was time to march. Each group of protesters signed up for a number, and then the groups lined up to march according to those numbers. It was orderly and peaceful. At the front of the protest, as before, were the Ce Atl Tonalli dancers, celebrating the Aztec heritage of Mexican workers. Behind them were the large banners of the labor organizers, and behind them, the signs scrawled in black marker with varying degrees of patience and artistic merit. As it oozed down the hill into the city, the stream of protesters swelled as smaller groups fell in behind.

Just before 4:00, the march crossed over I-5, turned onto Pine street and entered downtown Seattle, heading for the US District Courthouse two blocks to the northwest. Knowing that another, more ominous protest was scheduled for 6:00 on Capital Hill, I took the opportunity to grab a bite to eat, refresh my equipment, and walk up to the corner of Broadway and Pine.

At 6:00, the mood on Capital Hill was mostly somber. Again, it seemed as though there were as many photographers and news crews as there were protesters. Unlike Judkins Park, many of the people skulking around in the park wore gas masks, black hoods, goggles, or bandanas across their faces. Before the march began, I watched one of the groups pull black rubber gloves over their hands.

This protest was organized as an “Anti-Capitalism” march, but with the recent riots in Baltimore still fresh in everyone’s memory, this was just as much an anti-police brutality (or just plain anti-police) protest, too.

In general, I’m sympathetic with police in Seattle. They do a dangerous, necessary, and mostly thankless job, they’re generally there when I need them, and most of the ones that I’ve met have been good people trying to do a good job. There are probably unjust laws, but police don’t make the laws. Of course, there are always exceptions, and in the same way that I’m disgusted by the Catholic Church’s cover-ups of child rape and molestation, I’m disgusted with police covering up for dirty, racist or otherwise bad cops.

But I wasn’t there to make any kind of political statement, just to document the events, which started off simply enough. Just before 7:00pm, the crowd took to the street, marching north along Broadway, looping around a couple of blocks to the west, and then heading back along the way they came on Broadway. The front of the march was thick with photographers and other journalists, so I dropped back into the crowd, hoping to see something different, so I was surrounded by protesters when the first explosions clapped. At first, it sounded like fireworks going off… I assumed that some kids were getting into mischief with 4th of July leftovers, but then the crowd in front of me started to turn and run, scattering in the opposite direction. That made it easy for me to cover the half-block between where I stood and were the police had formed a bicycle barricade across the street.

As people rushed past me, more explosions went off between me and the police and on their far side, creating clouds of smoke and making my ears ring. I couldn’t see exactly what had caused the incident… I didn’t see any injuries or violence… but I did see a couple of bikes down on the street, surrounded by dented food cans and palm-sized rocks. The police barricade effectively split the protest in half.