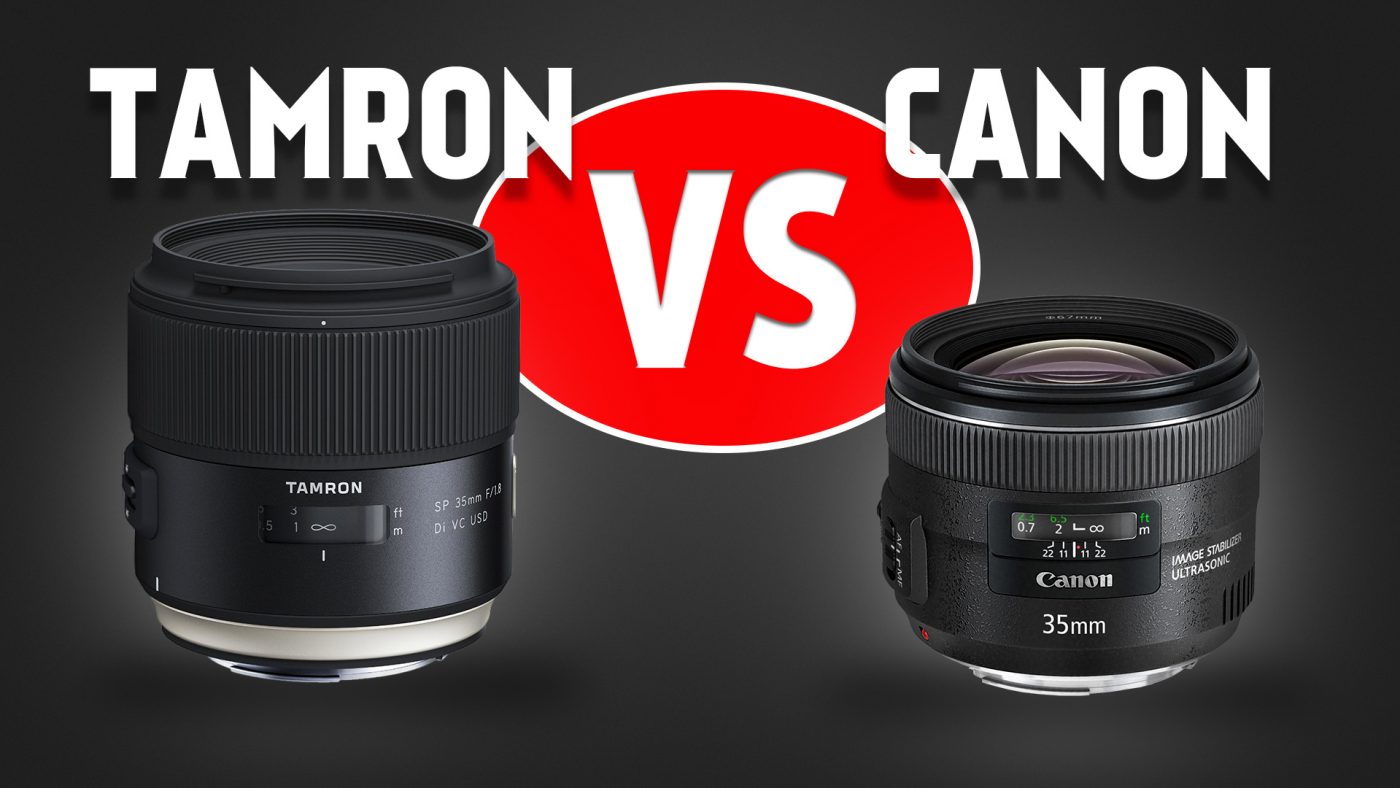 Having been very impressed with the Tamron lenses that I’ve used over the past few years, I was a little surprised by what I found when comparing the Tamron SP 35mm f/1.8 Di VC USD and the Canon EF 35mm f/2 IS USM. Neither one turned out to be The Perfect 35mm lens, but they both stand out in their own ways. If you’re the impatient type, you can skip to the conclusion.

Both of these lenses are wonderfully sharp and capture excellent detail, and even in the most obvious instances, the differences in image quality between the two lenses is very modest. That said, the Canon was consistently sharper in the center of the image until about f/8 (where they’re probably both diffraction limited), while the Tamron was sharper than the Canon away from the center and particularly at the borders of the frame.

The Canon optics do a remarkable job at controlling chromatic aberration (magenta or green color-fringing) in high contrast areas, eliminating it entirely in most cases. Before corrections, the Tamron suffers from a moderate amount of fringing across the frame, even in the center. I found this to be true on the Tamron lens that I used in the comparison video, and also of the first lens that I tested at the PhotoPlus Expo in the fall of 2015, so I don’t take this to be an anomaly with the sample I was testing.

The autofocus on both lenses was fast and accurate in my tests. Neither lens had significant front or back focusing problems, and neither missed focus at an unusual rate.

In my tests, the both lenses had no trouble providing 2-stops of stabilization at the bottom end of the shutterspeed range. Beyond that, it was a percentage game: the Tamron rarely produced usable images at 3-stops below 1/40th of a second, but the Canon did pretty regularly. The Canon dropped off further beyond three, but both lenses produced occasional good results. I consider the Canon to perform better by about 1/2 to a full stop.

Bokeh evaluation is a completely a matter of personal taste, so it only makes sense to show the results here and mention a couple of details. First, the highlight balls produced in the bokeh of both lenses have thick, contrasty edges, which is generally not considered ideal. Second, the Tamron produces slightly smoother bokeh, with larger details, but the highlight balls do exhibit “onion rings”, concentric circle artifacts produced by the aspheric lens elements.

As can be expected with a shorter, lighter lens, the Canon doesn’t have very even performance across the frame, and it displays very strong vignetting. In the corners at f/2, there’s a drop-off of at least two f-stops of light, and the vignetting remains quite visible at f/2.8.

The Tamon, on the other hand, controls vignetting very well. The corners show a very modest drop-off at f/2, with hardly any change when opening up to f/1.8. At f/2.8, there’s no significant vignetting.

With this comparison, we’re comparing a Tamron SP lens, part of the company’s professionally oriented line, against a non-L Canon lens… a consumer-line lens, so it’s no surprise that there are some differences in build quality.

Most importantly, the Tamron 35mm f/1.8 VC is a weather sealed lens, while the Canon 35mm f/2 is not. In addition to several rubber gaskets in the Tamron construction, its front element has a fluorine coating to repel water and oil.

The Canon is the more compact lens, shorter than the Tamron by about 1/2 inch, and 5 ounces lighter. Both lenses are quite a bit lighter than their f/1.4 counterparts, like the Canon EF 35mm f/1.4L or Sigma 35mm f/1.4 ART series lens.

Use the links below to download RAW files for a closer look. These images may not be reproduced, displayed, or published in any form.

Neither lens is optically perfect, but very few are. For my money, I’d prefer the across-the-frame sharpness of the Tamron lens, as well as its weather-sealed construction. That said, the Canon lens is slightly sharper in the center of the frame, and in high-contrast shooting, it controls color-fringing better than the Tamron. Canon’s image stabilization works a little better than Tamron’s Vibration-Control, but they both work well down to speeds at which subject movement is much more likely to be a problem than camera shake.

However, both lenses offer impressive optics, all things considered, and are good options for those photographers who want a compact lens and stabilization. I’d recommend either lens to traveling photographers for whom weight is a serious consideration and tripods are not always at hand.