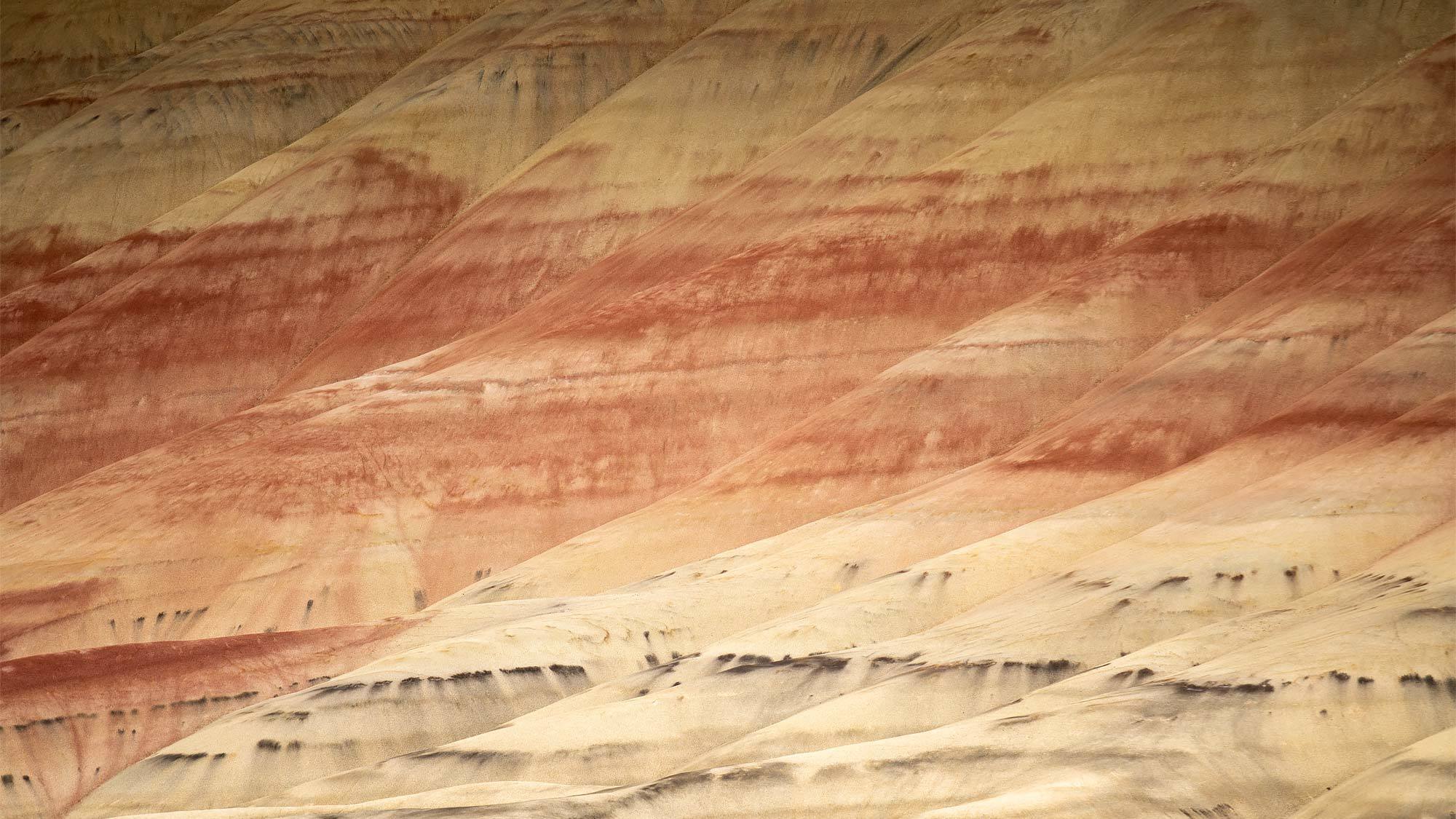 The felt-textured hills in John Day National Monument live up to their name, with runny water-color hues of yellow, red and green.

I woke up in a sketchy motel in Baker City, Oregon to a mercifully cool morning after my time in Utah. An armada of clouds raced across a dark blue sky, and I grabbed something continental to eat from the lobby as I checked out and pointed my car west. Instead of rejoining the traffic on I-84, I followed Highway 7 through the hills and ranches outside the city limits.

After a few hours of pleasant country roads, I found myself at the John Day National Monument ranger station, looking at an amazing array of local fossils in their display cases. A ranger told me about a couple of road cuts in the area where collecting was legal, and I thought about extending my trip for another day or two, but entered the Painted Hills coordinates into my GPS instead.

As I neared my destination, the landscape started changing. Bare hillsides in reds and browns started to appear, their cracked and crumbling surfaces looking unusually soft and fuzzy from a distance. As I got closer, the brown hillocks appeared to be made of coffee grounds.

And then suddenly, after a couple of curves in the road, the Painted Hills stood before me, ranging off to the distance on my right. Barbed wire fences protected the entire region from trespassers, and it was strictly forbidden to get any closer at ground level. I pulled out my 70-200mm and got what I could, also trying the Sigma 150-600, eventually.

Beyond my initial roadside stop, I found the parking lot and trailhead that led a short distance up a neighboring ridge with an overlook down into the valley of Painted Hills. This portion was dominated by yellow hues with dark spots and streaks of brick red.

The scenery was fascinating, but the light was boring. It was the middle of the afternoon, and sun was overhead, but the light was remarkably flat. I thought about sticking around to see how the late afternoon sun would change things, but that would mean another night on the road.

So, I spent a little time wandering around the periphery of the hills, looking for interesting textures and patterns. I drove up to a boardwalk loop in another part of the park, and the Red Hill trail where a ranger warned me about rattlesnakes on the path.

And then it was time to go, though I’ve told myself that I’ll make the drive down again later this summer to spend some real time photographing the hills. I headed north on some winding country roads (with dangerously high speed limits) until I passed out of the hills and into flatter farmland.

Like Washington, Oregon is home to several prominent volcanic cone mountains, including Mt. Hood and Mt. Jefferson. As I drove west across the state, they emerged from the evening haze and towered over the landscape.

As I passed by a recently plowed field, I spotted an empty old farmhouse and decided to stop. Looking down on the field, I could see the tracks of some vehicle coming in from the left and looping around the house, and then heavier tracks heading away to the right, so I hiked up the road a bit until the tracks on the right lined up with a road and the mountain out on the horizon, which appealed to my sense of order and also created a nice visual path through the frame.

I would have liked to get up close to the edge of the bluff and remove the foreground flowers, but it was on the other side of a fence and on private property, and I decided to skip it. It may have been worth trying my 85mm lens, too, to compress the mountain into the frame a little bit more. Maybe next time.