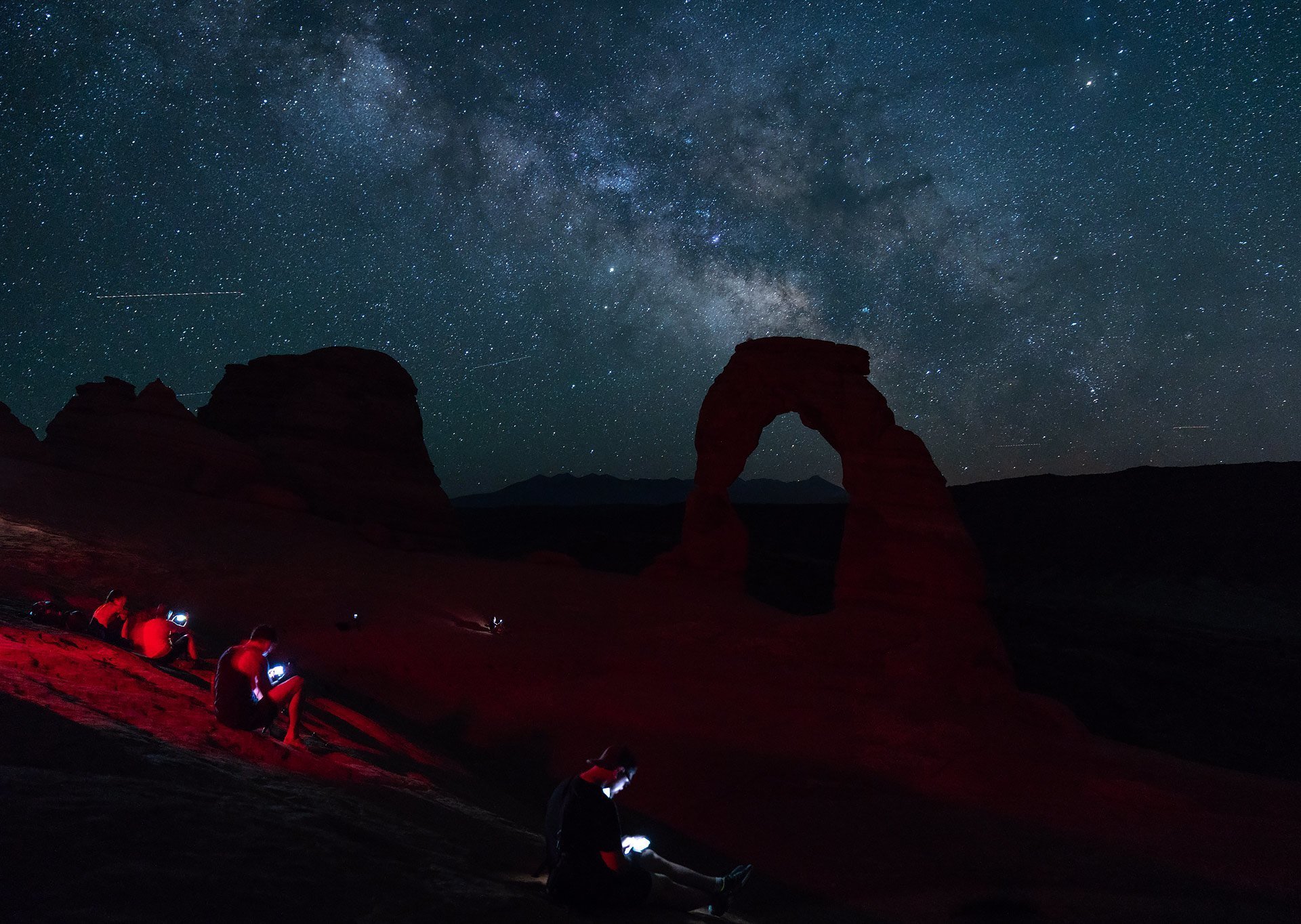 Photos of Delicate Arch may not be unique, but they're fun to shoot nevertheless.

When I arrived in Moab from the Sand Dunes, it was hot and getting hotter, with temperatures in parts of Utah expected to reach as high as 115°F. I’d seen most of Arches National Park on previous trips, and I had planned to spend some time hiking around in the Canyonlands this time, but I quickly realized that this was unlikely to be enjoyable or photographically useful. Instead, I decided to attempt a re-shoot of the night sky at Delicate Arch in Arches National Park, since my previous attempt had been marred by focus problems.

The hike to Delicate Arch is about a mile long, uphill and often across bare sandstone that has been baking in the sun all day. By the halfway point, my throat was dry and my heart was pounding, and I started to worry about heat stroke. The small children and senior citizens that were deftly scrambling past me were unencumbered by giant backpacks laden with lenses, tripods, and nearly a gallon of water, I told myself. Joking aside, the hike was hot but otherwise not too bad, and I reached the top around 6:45 PM on a day when the last rays of the sun would be hitting the top of the arch around 8:30PM.

I set up my tripod to take a few test shots, and sat back in the shade to wait for a few of the scattered visitors to clear out of the way. It was a long wait.

As the sun began to set, I was disappointed that the sky remained cloudless, but the light on the rock was warm and sharp. I tried a few different angles, and they were all just fine… but nothing spectacular. When the sun finally set, I headed down onto the rocks just above the drop-off to get the largest opening in the arch and the best view upwards towards the sky, and I set the focus of my camera before dark. The crowd didn’t disburse as much as I’d expected as it got dark. Not far to my left, a father from Florida and two of his teenage daughters set up cameras to await the appearance of the Milky Way. To my right, a Hawaiian van-lifer set up his camera and doled out the usual lines about how he had decided to stop waiting for his opportunities to come to him and just make them himself, so he left his job, bought a van on the mainland (sight-unseen) from Craigslist, and was hoping to find some sponsors while traveling around taking photographs and posting on social media. Directly behind me, a fellow with a Slavic accent occasionally joined in on the banter, and near the top of the trail, several others huddled around tripods, too. 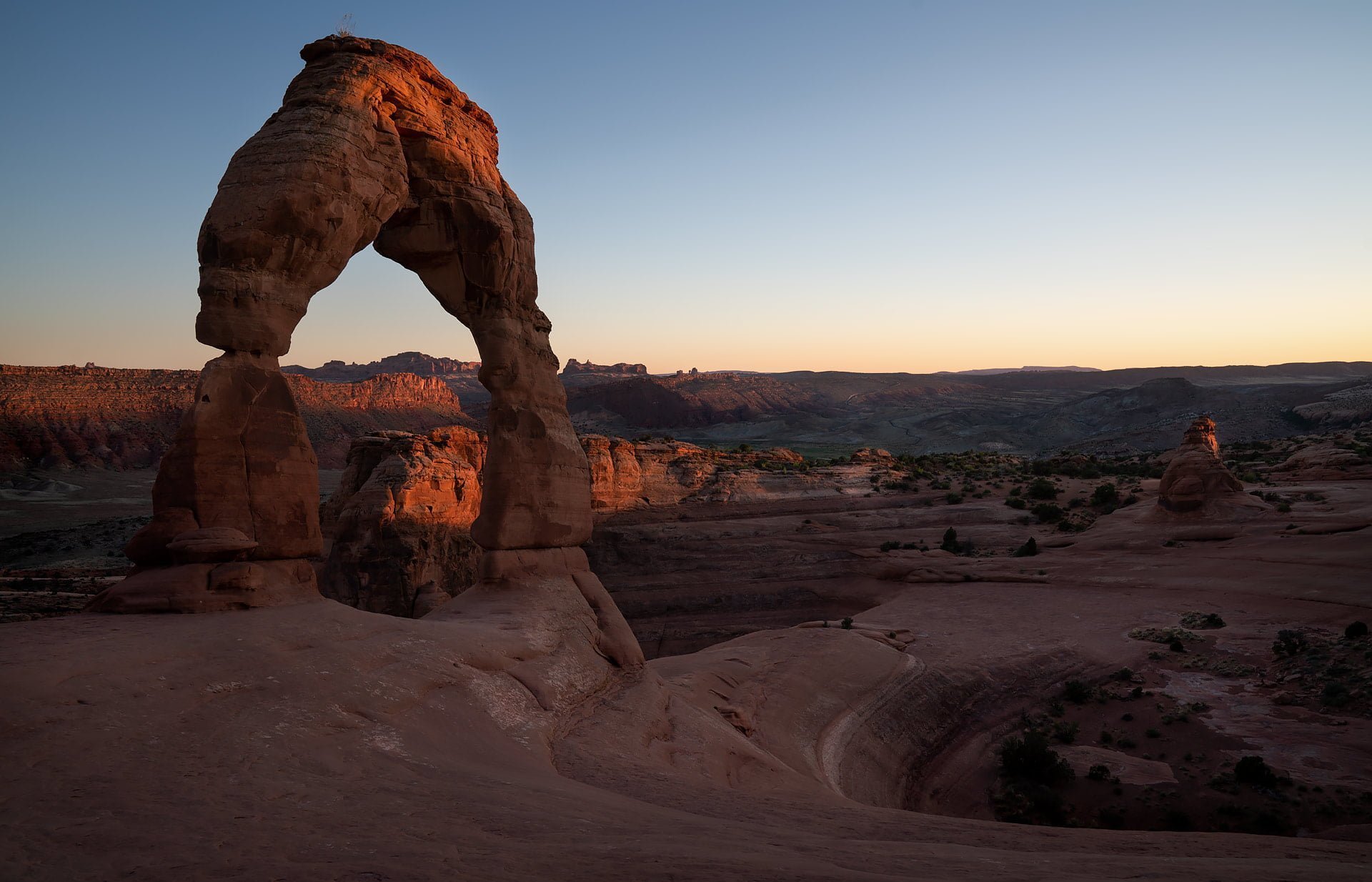 Everyone had different ideas about lighting the arch. Someone in the back bathed it in a red light now and then, and someone else used a standard white LED flashlight. The Florida crew had brought LitraTorch (or something very similar) and placed it under the arch. By itself, I wasn’t crazy about the effect, but one of the girls stood in front of it for an exposure, and it created a nice rim-light effect. I don’t know if any of them managed to get a good capture or not… there was a lot of discussion about ISO settings among them.

Around midnight, I was starting to get tired but noticed that the Milky Way was rising to the left of the arch. I moved my camera, but couldn’t get a composition that was even remotely interesting. Finally, I decided that I’d include the Florida dad who had moved up near the arch to capture the sky by itself, and that added the extra element to balance things out. 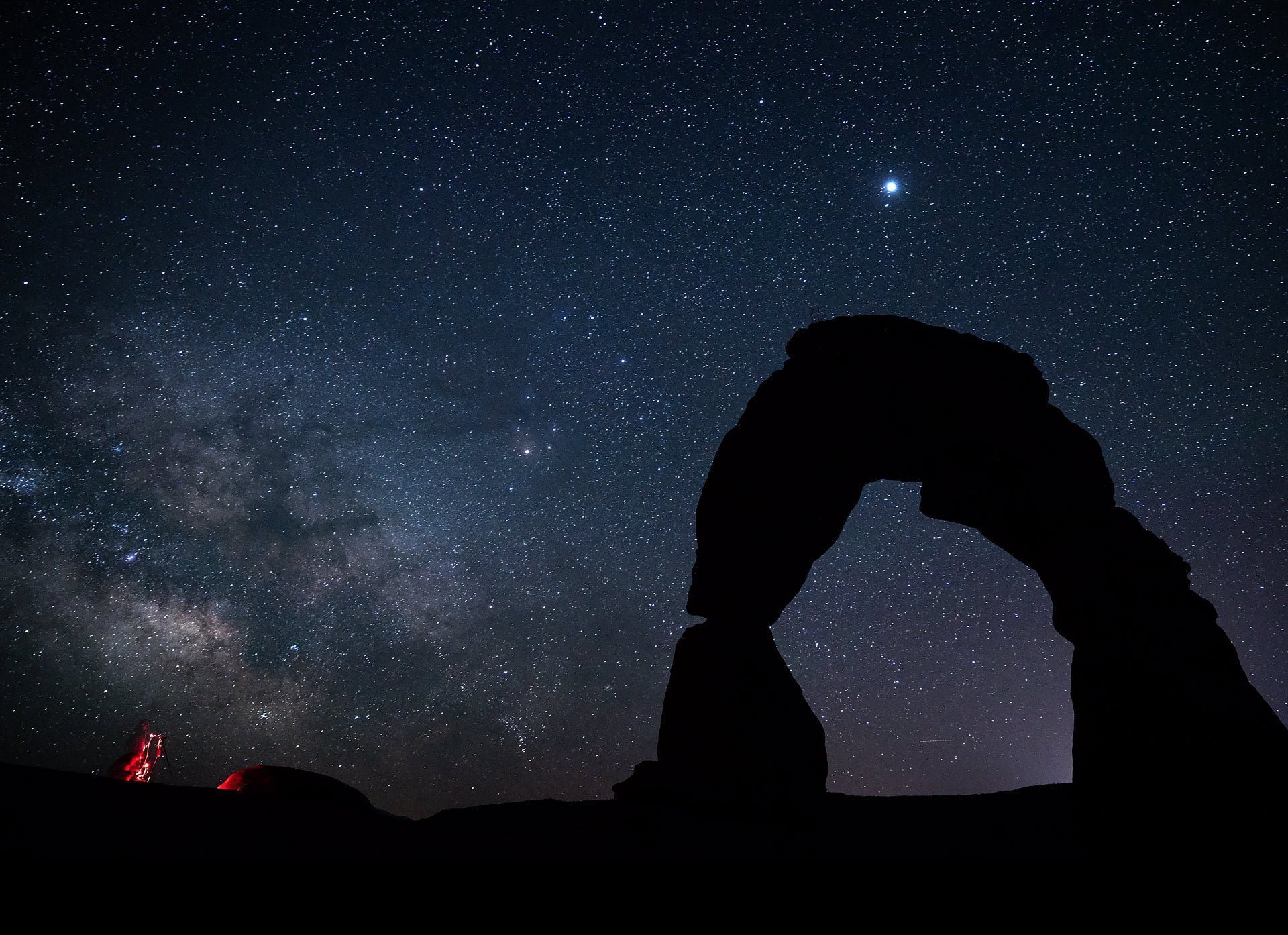 I didn’t want to wait until 2 or 3 in the morning for the Milky Way to work its way behind the arch from my position, so I decided to move back towards the mouth of the trail. From that position, the arch was lower and mostly lost in the dark below the horizon, but the sky was in a better position. Luckily, our friend with the red light continued to periodically light up the arch, which gave me the separation that I needed, and I was able to keep my own light in my backpack. I took a couple of shots and headed back down to my car.

The story should end there, but I’ll add a few more details anyway. As I headed down in the dark, I momentarily lost the trail until I was joined by a nice fellow photographer from Canada, and we missed the trail together for a while, but finally made it back to our cars. When (at about 2:00AM) I reached the campsite in the Canyonlands I had paid for earlier in the day, I discovered that it was occupied by a car, a tent, and a couple of teenagers (maybe college students). I woke them up, but decided that rather than evicting them, I’d sleep in my car for the remainder of the night. Late the next morning when I woke, they were gone, but they had left four cans of beer1 It was Pabst Ice, I believe, and I had no interest in it, so I donated it to the campground. It was a nice gesture, though. on the picnic table and this note: Rather than sticking around in the heat, though, I decided it was about time to head back home to finish up some Lens Comparison Videos. The Painted Hills in Oregon were on my way, though.