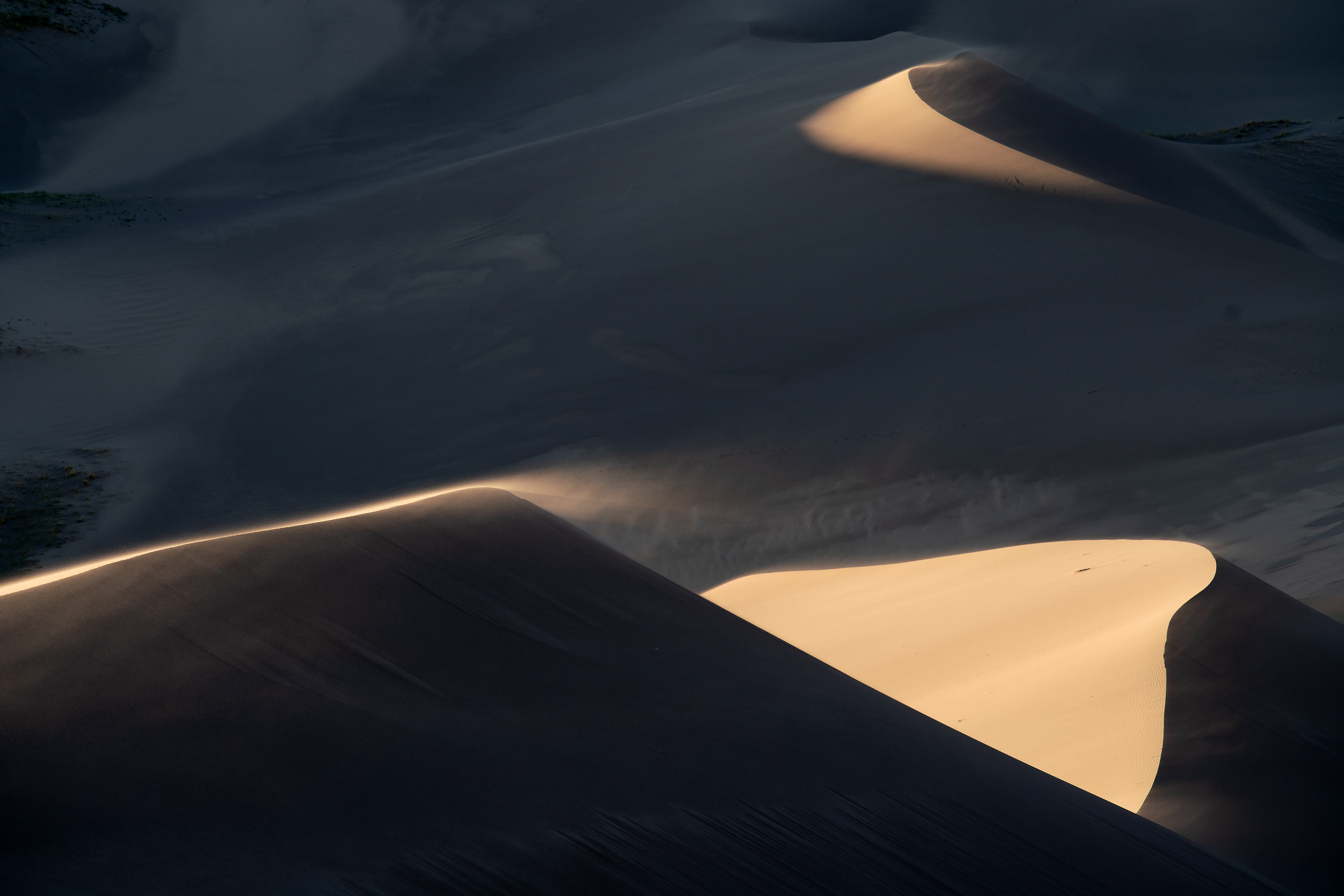 Since most of the frame is dark, there was a risk here of the highlights getting blown out. -2 exposure compensation.
Photo Expeditions & Travel
·5 min read

If you can keep your equipment safe, the Great Sand Dunes are a wonderful place to hone your composition skills.

Sand and cameras are natural enemies, and at the Great Sand Dunes National Park in Colorado, the winds are always blowing. I was hesitant to put my new Sony A7RIII in the way of danger, but my reservations were overcome by my excitement to be back in the towering dunes.  It’s easy to see why dunes are so popular with photographers: the interplay of light and shadow, the simple lines and curves, subtle grades and stark contrasts… all of it makes for wonderful studies in composition.

There are a few things that you can do to help keep your equipment safe while shooting in the dunes:

On my first day in the dunes, I decided to carry the Sony A7RIII and the 24-70 f/2.8 G-Master lens, though I knew that I’d prefer a longer lens. The light was flat the first day, as the sky was cloudier than I’d expected. My goal was to begin by picking out some basic shapes in the dunes, and then look for more complex compositions.

As the evening approached, the sun was hidden by a thick bank of clouds. I switched tactics and looked for lower-contrast, subtler compositions with more delicate details and tonal gradations.

Not particularly happy with most of these loose shots, I gave up and began heading back to my car, but just in the nick of time, the sun dipped below the clouds and gave me a few last seconds of contrasty shadows.

Figures in the Dunes

When I returned the next afternoon, the sky was clear and blue, and I had adapted my Canon 70-200 f/2.8 to the Sony. The longer focal lengths made it much easier to pick out the shapes in the dunes with clean backgrounds, and the deep shadows produced by the late afternoon sunshine made the job easy.

As I walked through the dunes, looking at the curves and shadows, the dunes began to take on familiar forms. My mind began seeing human shapes traced by the soft lines… the curve of a hip, the outlines of legs and stomachs. Perhaps it is a human trait to look for ourselves in everything else. Perhaps I’d been wandering in the desert for too long.

As the sun began to set, the dimming light shifted to orange and the shadows deepened. From my position in the dune field, the shadows engulfed the sand very quickly, leaving only a few peaks to catch the light. I shot what I could, and then headed back to my car, ready to get out of the dry heat and blowing sand. The next day, I decided, I’d head towards Moab, UT and Arches National Park.