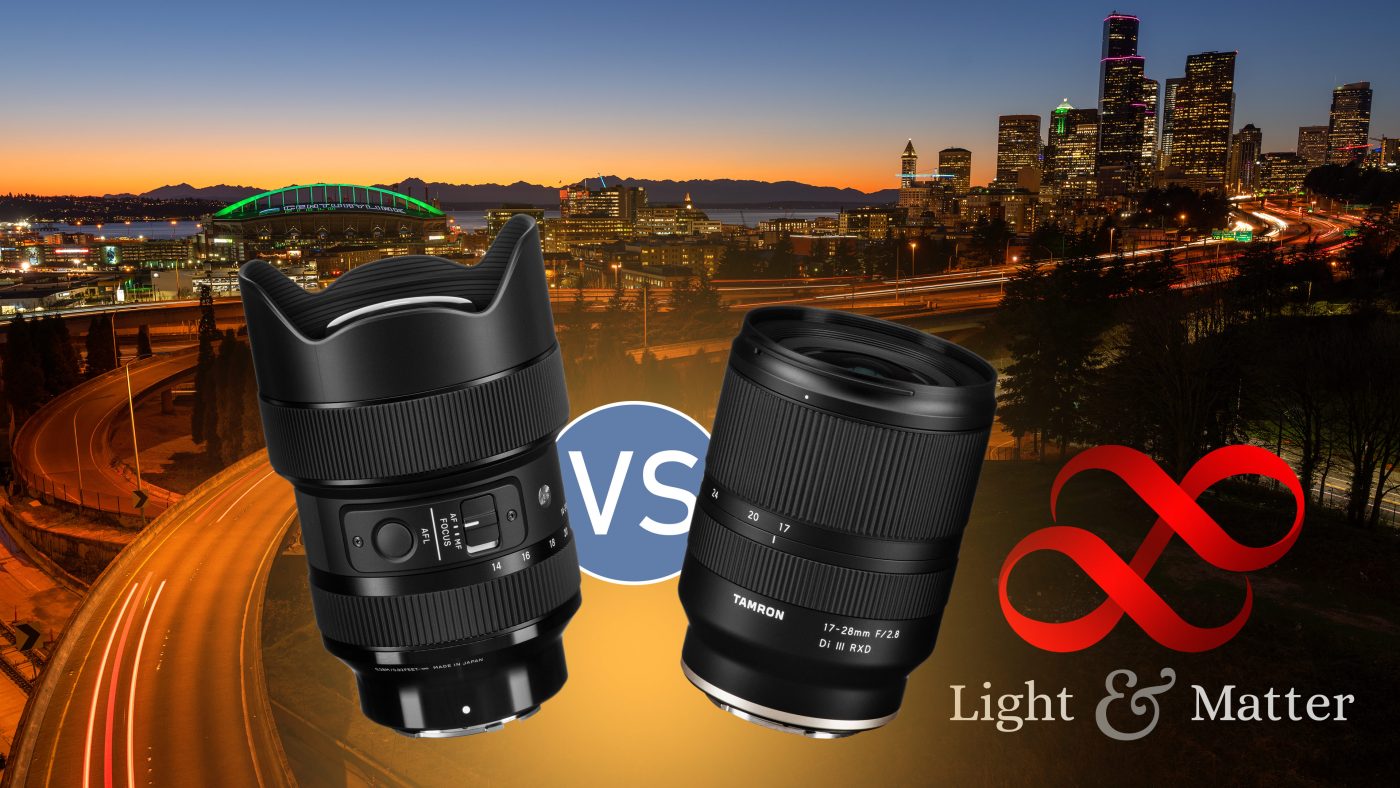 Gone are the days of soft images and blurry, streaky corners in photos shot with ultra-wide angle zoom lenses. The Sigma 14-24mm f/2.8 ART and Tamron 17-28mm f/2.8 for Sony-E mount both produce sharp, crisp images from center to edge, though they’re not exactly equals. The two lenses both have their strengths, and each will be best suited for particular types of photographers. Keep reading or watch the YouTube video for the details.

It will be immediately obvious when you pick them up that these lenses belong in different weight classes; the Tamron is a welterweight at only 418g (0.92lbs), while the Sigma is closer to a light-heavyweight at 795g (1.75lbs), with a large, bulbous front element and fixed lens hood that preclude the use of screw-on filters. Instead, the Sigma uses rear-mount filters, and even comes with a nifty little template/tool to cut gel filter to fit the rear mount.

Additionally, the Sigma lens has an AF-lock button, like a Sony lens, and an AF/MF switch, while the more minimalist Tamron has no buttons or switches at all. I don’t miss the button on this lens, but I always would prefer to have a manual-focus switch. Both lenses have standard dust and weather seals.

The Sigma’s corpulence stems from it’s much more ambitious zoom range at the wide end: 14mm as opposed to the Tamron’s 17mm, and while a difference of 3mm may sound modest, it’s a dramatic difference at the ultra-wide end of a zoom: a 14mm lens provides about a 104 degree horizontal field of view, while a 17mm is only about 93 degrees.

After a couple of months testing these lenses, I didn’t find that either lens had any significant problems with autofocus. Both were quick and nearly silent on my Sony A7RIII, though of course, lenses may perform differently on different cameras. Since I did not attempt to shoot sports or action with the lenses, my AF testing was not especially demanding.

The Sigma 14-24mm f/2.8 and the Tamron 17-28mm f/2.8 lenses are both very sharp with excellent resolution across the entire frame, but they are not identical, and in the few cases where there’s a significant difference, it’s the Sigma lens that has higher resolution and sharpness.

At the wide angle end of the lenses you’ll find the most significant differences, varying from minor differences in the center wide open (down to almost no difference at f/8) to a visible difference away from the center of the frame at f/2.8 – f/5.6.

The two images above show a significant difference in resolution at this part of the frame, but this appears to be (at least partially) due to a de-centering problem on the Tamron lens, now that I investigate a bit further.

These two crops are from the same images, but on the opposite side of the frame:

As you can see, the differences here are minimal.

At the 24mm end of the zoom, there’s even less difference in resolution. In the center of the image, there’s no practical difference at all. In fact, looking at the RAW files, it’s possible that the Tamron is marginally higher resolution than the Sigma, but it’s completely negligible.

As you stop down the aperture, the Sigma gains contrast and consequently looks a little sharper than the Tamron at f/5.6, but the resolution is still about equivalent. Further away from the center of the lens, the Sigma gains a little advantage at f/2.8 in the corners, but they’re otherwise identical.

The protruding front element of the Sigma 14-24mm f/2.8 ART lens can cause flare problems that would not normally occur in lenses with more traditional front element.

This is typified by the image below. As you can see from the shadow length and direction on the yellow cones in the road, the light is coming directly from the left side of the frame and about 45 degrees up, which should not be a problem for a normal lens with a hood. On this lens, though, we get a strong crescent of flare.

Both excellent lenses, the Tamron and Sigma both make excellent choices, depending on what is most important to you.

If, on the other hand, you prefer a high resolution lens but don’t need the mode extreme wide angles and don’t want to be weighed down with pounds of extra glass in your bag, then the Tamron fits the bill: it’s nice and sharp across the frame at about half the weight of the Sigma, and it costs $500+ less as well, at only $899.00.

Still not sure which lens to buy? Feel free to ask me any questions that you might have in the comment section below!