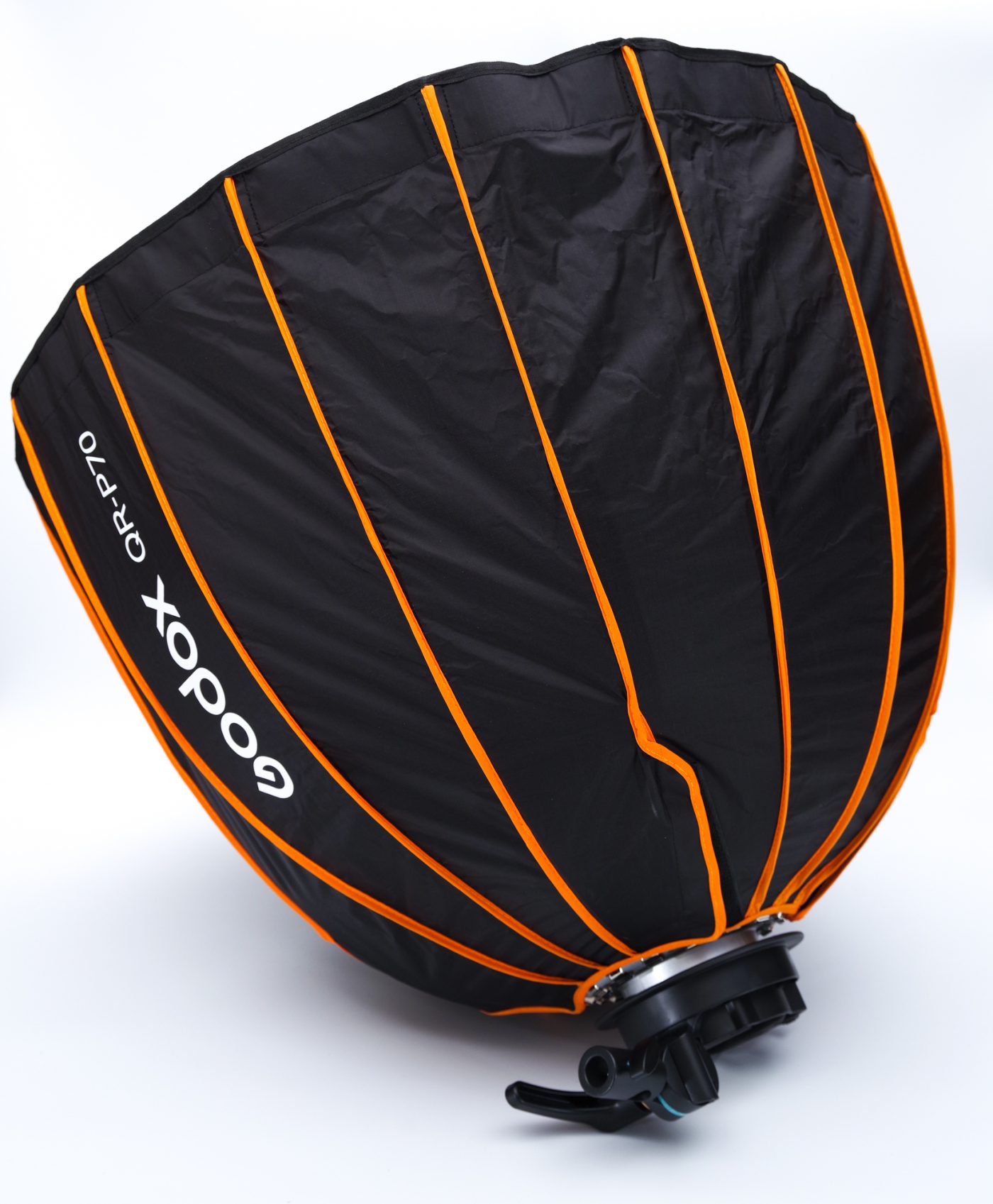 The Godox QR-P70 is a compact softbox that’s easy to carry and quickly set up. Coupled with the S2 bracket, it makes a versatile and lightweight kit, both for the studio and on location.

In this article, I will be taking a look at both the QR-P70 softbox and the S2 bracket from Godox.

A softbox is, in many ways, a better tool than an umbrella for portraits and studio work. It makes it easier to control the spill of the light and shape it according to the photographer’s wishes. Using internal diffusion panels, grids, and the right softbox shape, light can be finely directed. However, softboxes are often large, cumbersome and long to set up, while umbrellas expand in seconds.

In recent years, manufacturers have come up with softboxes that expand like an umbrella, relying on a central shaft. This is faster but has an important drawback: this central shaft is right in the path of the light, decreasing the uniformity of the light or requiring the use of reflectors inside the softbox.

Newer designs, like Godox’s QR-P70 (QR stands for “quick release”) strike a better balance. They are almost as fast as an umbrella to set up, but offer all the advantages of a traditional softbox.

The QR line comes in three sizes. I am testing the most compact, which still offers a diameter of 70cm (27.6 inches). 90cm and 120cm options are also available. The smaller version is easier to carry and manage and concentrates the light more.

The softbox ships in a simple but well-made case, with enough free space for a few accessories (like the S2 bracket, see below).

Folded, the softbox only takes up a small volume. The orange highlights are a nice touch.

To expand, the user simply pulls on the rods to have them click in place. It’s easier to do this by pulling on two opposing rods at the same time. Once locked, the rods take on a parabolic shape (parabolic modifiers are supposed to be slightly more directional). With some practice, locking the rods on the QR-P70 softbox takes no more than 20 seconds, slower than an umbrella but still very fast.

Once the rods are locked, the fabric folds back in place and attaches with Velcro. It is a bit tight, but again practice makes perfect and, once assembled, there are no folds or creases in the fabric; it hugs the parabolic shape perfectly. The interior is covered with a metallic finish, without surprise. The front of the QR-P70 is very nearly circular.

There are two diffusers included with the QR-P70. The one shown above is the ubiquitous front diffuser, but another one is hidden underneath. They both attach via Velcro and are easy to position. Using one or two diffusers will impact the softness of the output. The two diffusers can stay in place when folding back the softbox. An optional grid can also be mounted to the front.

The QR-P70 ships by default with a Bowens-compatible mount. This is replaceable with adapters for various other mounts.

One of the best and simplest tools to mount the QR-P70 softbox is Godox’s S2 bracket. This bracket attaches to Bowens-compatible modifiers and offers a surprising number of features.

The bottom section of the clamp can be removed simply by sliding it out, to accept either rectangular or circular lights.

With a strobe like the Godox AD100Pro pictured above, such a bracket is the best way to mount on a softbox.

The bracket is meant to be mounted on a standard light stand. Thanks to a second hole on its base, it can be mounted either vertically or horizontally for added flexibility.

The handle controlling the tilt works better than expected. It is easy to tighten with about a quarter turn, is extremely stable once locked and can be re-oriented by using the button on the pivot.

Mounting a Bowens-compatible modifier on the S2 bracket is lightning fast, requiring only a short rotation to lock it in place. Removing the modifier is as easy, done by depressing the release button and rotating. There is some wiggle when mounting a modifier, but the attachment is solid nonetheless.

The quality of the light is just as expected. Photographers used to softboxes will find no surprises here, while those more familiar with umbrellas will appreciate the added control that a softbox offers.

The Godox QR-P70 is available from Adorama now for $99, will be available in the future from B&H for the same price, and is available from Amazon for $95.00. Though cheaper softboxes are numerous, they can be slow to set up, and shallower boxes often produce a hot-spot in the center.

That said, umbrella-style softboxes can offer some real competition and cost significantly less. The Glow EZ Lock model of the same size costs about $30 less, and the difference in light quality is debatable, and larger sizes are similarly inexpensive.

The Godox S2 bracket will cost $25 at Amazon or B&H, and is also sold at Adorama under the “Glow“ brand name for the same price.

For many seasoned photographers, a softbox holds little mystery. What they look for in a product is quality of craftsmanship and ease of use, both of which are hallmarks of the Godox QR-P70. Godox offers larger versions of the softbox, but I really enjoyed the portability and ease of use of this smaller version. It is easy to bring with me and to store between uses. In a pinch, it is light enough to be used handheld, holding the S2 bracket in a pistol grip.

There are many softboxes available on the market, all using the same basic principle but with various levels of simplicity. It is good to see a product like the Godox QR-P70, which strives to make it faster for the photographer to set up lights while still maintaining good quality and a fair price.