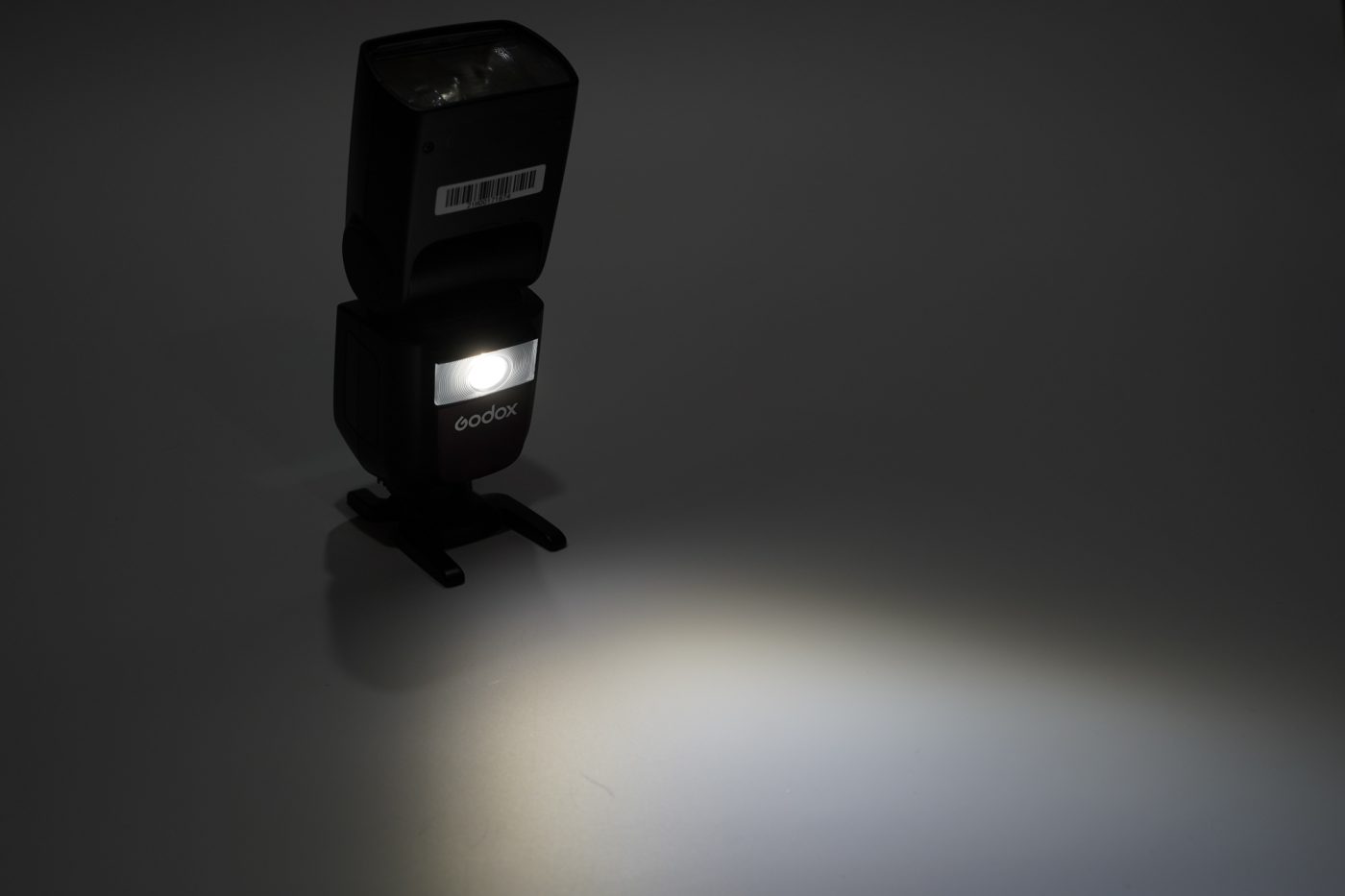 In this article, I take a look at Godox’s recent upgrade to their V860 line, the V860 III.

The V860 flashes are interesting products for many reasons. Building on the design and features of the venerable V850, these flashes offer, in addition to what’s expected of a modern flash, a few key features:

In addition to the flash itself, a case and a foot, it comes with a dedicated battery charger (compatible with batteries for the Godox V1 and Godox AD100Pro), as well as a quality USB-C cable and a wall plug capable of delivering 2A and 10W.

The V860 III uses the classic speedlight design, but with a few twists.

The front shows one of the elements specific to this flash: a 2W modeling light. Normally found on studio strobes, rarely on speedlights, this light has a color temperature of 5300K, 10 adjustment levels, and can be used together with the main head if desired.

As such, it can help to preview lighting effects, assist focusing in dim environments, act as a fill or as a light for video work. The flash also provides a red AF assist light.

The head can of course tilt forward (down to -7° for close-ups), straight up, but it can also tilt backwards up to 120°. Most flashes limit themselves to 90° (vertical); the backwards tilt makes it much easier, and faster, to bounce the light back and fill a room.

The head can of course rotate horizontally as well, covering 330°.

Like almost every flash on the market, the V860 III’s head offers a bounce card and a wide diffuser panel.

To one side is another novelty: a dedicated TTL/Manual switch. Instead of fumbling through menus, this switch makes selection direct and visible. Note that using the flash as a wireless receiver, the trigger will override this setting.

The battery is the same as the Godox V1, but not identical in shape to the one used in the AD100Pro. The battery takes up the whole width of the flash body.

The back shows a large illuminated screen and many buttons. The foot features a quick-release locking lever, faster to operate than a screw-lock.

The V860 III’s battery is rated for up to 480 pops at full power, with a recycle time of 1.5 seconds. Decreasing the output power speeds up these numbers considerably. From experience, firing the flash at ¼ power o lower, it can shoot several times per second.

The flash can operate in high-speed synch, up to 1/8000 seconds (with a lower output power, just like any other flash).

The V860 III offers many options, and can take a while to master. Its user interface is essentially similar to that of the V860 II.

Right below the screen are four buttons whose functions will change according to the current mode. The screen will show the current setting.

To the left is the menu button. Cycling through the menu is down via the center dial, which acts as both a four-way controller and a rotating dial.

Below the menu button is the flash test button.

To the far right, next to the power switch, is the trigger control, changing between standard (via the camera or optical slave), wireless master or wireless slave.

To quickly know which wireless mode is currently being used, the screen’s backlight changes from blue (master) to orange (slave).

The center dial gives access to the zoom control, the backlight, the power setting and the shooting mode.

All the rest is done via the menus.

Quite simply, the Godox V860 III is a very good flash.

When mounted on camera, it operates simply and efficiently. Changing basic settings is simple, be it in TTL or in manual modes.

The flash is solid, well built, and durable. Having used several V850 flashes for many years now, I have confidence in Godox’s durability. At 430g, its weight is well within expectations, and the size is in line with similar speedlights.

Although it can’t compete with a dedicated studio strobe, at 76W the V860 III offers plenty of power. I frequently use lower-power flashes in the studio, and especially when shooting on location. They are more portable, work on battery, and still pack a punch.

The main limitation of the Godox system is that each flash uses a slightly different user interface. I personally use the V860 III, the T350 (a compact, easy to carry flash), an AD100Pro and the X2T trigger. Each offers the same options, but the buttons are always positioned differently, and operation has to be re-learned each time. When using the flash on-camera, this is moot as it will often be used in TTL. When using it remotely, it’s simpler to just use a trigger and only have that to learn.

Godox V860III Compared With Other Options

It is not realistic to compare the V860 III with all of the first-party options on the market, simply because there are so many of them.

In general terms, the Godox offers performances and capabilities similar to what is available from other manufacturers. None of its specs lag behind, and some are ahead of the pack. Price-wise, the Godox V860 III is significantly cheaper than flagships from other companies. For instance, a Canon Speedlite 600EX II-RT costs $499.99, while a Sony HVL-F60RM costs $598 and a Nikon SB-5000 AF costs $596.95. At $229, the Godox V860 III is a steal.

The use of the Li-Ion battery is certainly a perk, at least for power and recycle time. Most flashes use AA batteries, which are easier to come by and cheaper, but never offer comparable performances.

The Godox flashes support wireless TTL, but only via their 2.4GHz radio “X” protocol. Again, this is both good and bad. Radio waves are much more reliable than the optical protocols used by many, and have a better range. On the flip side, Godox flashes are not compatible with OEM protocols, so they are mostly a closed ecosystem (apart from manual optical slave). Most OEMs are moving away from optical and towards radio protocols , each system also being closed, so Godox is just one more among those, with the added benefit that flashes meant for different systems (for instance, a V860 III for Sony, and another for Canon) can work together when using a Godox trigger.

One perk of the Godox system is that, with the proper trigger acting as a receiver, it is possible to use flashes from different brands together, thanks to the X protocol which can translate signals between different brands. For instance, one could use a Canon flash, mount it on a X2T made for Canon, and trigger it with a Sony camera equipped with another X2T made for Sony. In that fashion, the X protocol is more open than competing options.

It is also interesting to compare the V860 II and III. Here, the best choice isn’t as obvious. The  V860 II offers 650 pops at full power instead of 480 for the III, has the same recycle time and is less expensive: only about $179. The new version has the significant advantages of the modeling light, the backward tilting head and the TTL/M switch. With the V860 II, the head first needs to be rotated to tilt it backwards.

Godox also offer the V1 flash with a round head. Slightly more expensive than the V860 III, it offers essentially the same feature set, except for the shape of the head. The V860 III offers a more traditional rectangular head, with a slightly smaller footprint, while the V1 offers a round head, compatible with accessories like those of the AD100Pro. The V1 does not cover as broad a zoom range as the V860 III, and does not include a bounce card nor a wide diffuser panel, requiring accessories for this.

Like almost all Godox products, the V860 III is also sold under the Flashpoint brand at Adorama in the US.

With the V860 III, Godox added a few key improvements to an already robust speedlight. Apart from the increased price tag, this new flash has no true weakness and delivers an impressive number of features, especially for the current low price of $229.00.

You can find the Godox V860 III in different mounts at B&H Photo or on Amazon, here: