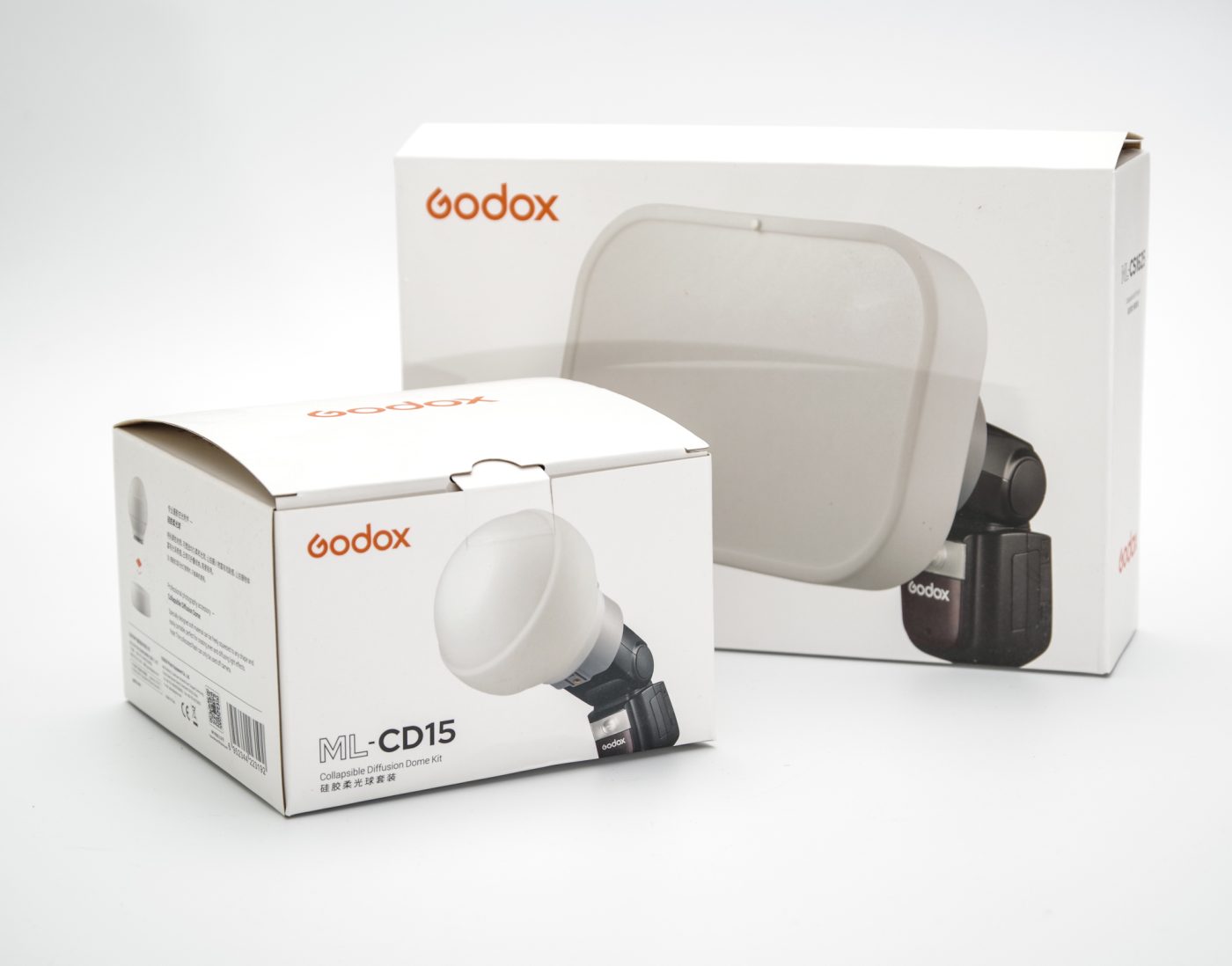 In this article we take a look at two compact flash modifiers from Godox, the ML-CD15 and ML-CS1625. Portraits photographers constantly look for ways to shape and direct light. It can be done by bouncing, using an umbrella or softbox, or diffusing the light by other means.

Using large modifiers such as softboxes isn’t always convenient, as these items are large and take some time to set up. They also cannot easily be moved around. Bouncing light on a wall or ceiling also doesn’t always work, for instance because of distance or color. This is why compact modifiers, attached directly to the flash mounted on the camera, can be very useful.

Gary Fong and Sto-Fen paved the way for many regarding on-camera modifiers. Sto-Fen-inspired rectangles are now shipped directly with many flashes, and Fong’s Lightsphere has become an easily recognized name. This doesn’t stop other brands from releasing their own take on this type of products.

With Godox’s ever-expanding line-up, it is not surprising that they recently released two flash-mounted modifiers. The ML-CD15 and ML-CS1625 share several features but come with different shapes and shape light differently.

The ML-CD15 is essentially a dome, while the ML-CS1625 is a rectangular soft tent. Both share some elements despite the different shapes. They are both made of soft material, akin to silicone. Both are collapsible and can be crunched, folded, their shape can be changed within some limits. Both use the same mounting scheme, offering several options.

The modifiers can attach to rectangular flash heads (such as on the V860iii or almost any standard speedlight) or circular heads (such as the V1 or AD100Pro). They can also attach to larger Godox heads such as the AD300Pro or AD400Pro, as well as other flashes, thanks to the company’s Godox Mount Adapter. These mounting options make the modifiers versatile, even though they cannot be directly attached to studio lights from other companies.

This is a limitation on paper, but not truly bothersome. In most cases, when using large and powerful studio lights, a compact modifier isn’t the way to go. The ML-CD15 and ML-CS1625 are much better suited for speedlights.

The ML-CD15, called a dome by Godox, is a mostly spherical modifier with a diameter of 15cm (6 inches). It is surprisingly light given its size, but still feels substantial. Some care should be taken when mounting it on the camera, to avoid stressing the speedlight’s foot and risking damage to it.

The dome folds in two places, providing three different shapes. The folds occur above or below the cylindrical band at the center.

The standard shape is the dome, which throws light all around. A speedlight can point directly at the subject to send a bit more light its way, or be directed upwards. In both cases it will essentially fill a room, creating even illumination.

Folding the dome below the center band (close to the flash) will create a half-dome. This will diffuse light to roughly 180°, concentrating light forward from the flash. When aiming forward, shadows will be more defined, but in truth the difference is subtle.

Folding the front will create a “cup”. The front will be flatter, creating still more dimensionality while still providing a larger effective source than just the flash. This will work better when directing the light towards the subject.

The images below show the effect of the diffuser when using a Godox AD200Pro with the standard Fresnel head as a source. The first image shows direct illumination without the diffuser, and the others show the effect with the three available shapes. The flash was oriented directly towards the subject.

The effect of the globe is obvious, regardless of the shape. We used a textured background to illustrate how the diffuser affects the shadows. The effect is obvious, and mostly independent of the modifier’s configuration.

The subject itself shows more dramatically the impact of the modifier. The full globe delivers (in a moderately small room, where light can bounce on the walls and ceiling) a smoother illumination, with less risk of blown highlights. The half globe is nearly similar, but with sharper contrast. The recessed dome yields results more closely resembling the flash alone.

The second modifier is a flat rectangle instead of a dome. The sides are made of the same white material as the dome. The front panel is a thin but rigid sheet of plastic and doesn’t bend. The rectangle’s dimensions are 28 x 17 cm (11 x 6.7 inches).

This modifier is intended to replace (to some extent) a softbox, providing diffuse directional light. It CAN be directed upwards, but the result will be very similar to directly bouncing the light without a modifier. With direct illumination, it spreads out the source by some orders of magnitude, creating softer shadows. In addition to the size, the lack of defined edges are the main differences versus a traditional softbox, leading to a less clear-cut shadow boundary.

In its extended shape, the modifier does direct some of its light towards the sides, so a bit of room-fill is obtained. The front panel can be compressed towards the flash, for a thinner profile and less spread.

Best results are obtained when the diffuser panel is close to the subject. In that case, the relative size of the light versus the subject is increased. Even at a distance, it does provide a much better spread than using just the flash head.

The rectangular front panel can be oriented vertically, horizontally, or anywhere in between. It is moderately large, and it can become clumsy to handle a camera, speedlight and modifier. Things improve with practice. This modifier makes more sense than the dome if used on a light stand, as a replacement for a larger softbox.

The images below show the effect of the diffuser when using a Godox AD200Pro the standard Fresnel head as a source. The first image shows direct illumination without the diffuser, and the others show the effect with the two available shapes. The flash was oriented directly towards the subject.

In its compressed shape, the rectangle produces flat, unflattering light. It is surprising that it actually looks worse than the AD200Pro alone. In any case, it shows that this shape should be used for storage, nothing else. When extended, however, it makes the shadows more diffuse, and the light spread on the subject’s face is smoother. The rectangle modifier produces, as expected, more directional illumination than the globe.

People have used all sorts of light modifiers to increase the effective size of their light source. Some have even used plastic food containers to good effect. Why, then, pay for products such as Godox’s modifiers?

The first reason is ease of use. Mounting the modifiers is easy and the connection is dependable. It is much more convenient than jerry-rigging a home-made solution.

Light quality, within the possibilities of a small modifiers, is excellent. The material does not absorb much light, and the spread is uniform.

Being able to compress the modifiers to store them anywhere is useful. They remain substantial, especially the rectangular ML-CS1625. This is a modifier that I see myself bringing with me with a purpose, when I specifically plan on using it. It is not something that is easy to carry “just in case”. It is simply too big for that. However, when space is limited but light modifiers are necessary, it’s an excellent replacement for a larger piece of equipment.

The ML-CD15 dome is still a bit large, but more compact and easier to squeeze in the corner of a camera bag. It is also a more general use modifier than the rectangle, but will less capabilities to direct and shape light. It will serve better for group shots or in-the-moment scenes (think wedding party where people are moving all around relative to the photographer).

There is no lack of light modifiers on the market. The most obvious comparison for Godox’s products is the Magmod system. This system requires a semi-permanent holder on the flash head, but allows quick magnetic attachment (like Godox’s round head accessory kit but compatible with third-party flashes). The price is higher, at around $109 for a beginner kit.

The Lightsphere from Gary Fong is of course another comparable. Smaller than Godox’s dome, it can support a few extra accessories to color the light or make it more directional. It is more limited in its effect, however, mostly meant to fill a room. The basic Lightsphere costs $69.

Neither offer a flash-mounted diffuser as large as either of the two Godox modifiers. There are many cloth diffusers on the market, held in place by Velcro, which come closer to the size of the Godox options. They cost a comparable amount, but don’t offer the solidity and ruggedness of the Godox. They also compare only with the dome diffuser; there is no direct competitor to the rectangle panel.

At $29 for the dome and $39 for the rectangle (both including mounting accessories), the Godox diffusers cost a similar price to most cloth-and-velcro options. They are much cheaper than Magmod, Lightsphere or others.

It’s always good to have options when looking at light modifiers. For that alone, the ML-CD15 and ML-CS1625 are welcome additions. Both products are light, rugged, easy to use and produce pleasing light distribution.

The dome diffuser is closer to a typical sphere, meant to light up a room uniformly. Thanks to its compressed shapes, it can do more, and shape the light to some extent. The rectangular panel goes beyond most flash-mounted modifiers, and comes closer to a miniature softbox.

Both products are interesting and, with some practice, offer more options for in-the-field flash photography!

[Editor’s Note: Light diffusion is a product of the size of the diffuser and how close it is to your subject. A larger diffuser will always give you softer light (at the same distance) than a smaller one, and moving a diffuser closer to your subject will make its size bigger, relatively, so it will produce softer light. Although less convenient to carry than these Godox products, a simple shoot-through umbrella attached to a speedlight with an umbrella mount ($8) gives you the potential for dramatically softer light quality. -M.G.]

Review of Two Godox Light Modifiers
Pros
Inexpensive
Self-contained kit, no need for extra accessories
No component remains on the flash when removed
Rectangle panel is unique on the market
Quick mounting on Godox round heads
Compatible with most flashes on the market
Quick mounting on magnetic Godox round heads
Somewhat bulky
Cons
No option for a grid