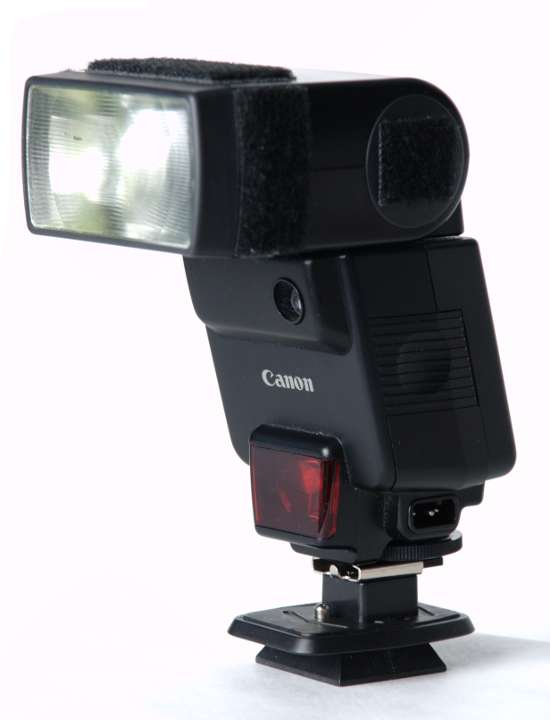 For a long while in the early 1990s, this was one of the top of the line Canon flashes for the EOS system cameras. Consequently, they’re well built, reliable, and very intuitive to use. I purchased this unit back in 1994, but they can now be found (used) for $25 or less (check Ebay for current availability). The EZ strobes (as opposed to the newer EX) are not on-camera compatible (no TTL, etc) with Canon digital cameras, but they still work as well as ever off camera.

The controls on the back panel are very simple to use. There’s a “Mode” button that allows you to select ATTL, Manual or Multi-flash. The next two buttons (+ and -) adjust different settings depending on the mode. In ATTL, they adjust exposure compensation in 1/3 stops. In manual, and multi-flash, they control the power level. The fourth button turns on the LCD’s backlight,  which is a smooth blue-green.  In multi-mode it also selects the number of flash bursts (from 1-10). The last button controls the zoom, which has a range of 24 – 80mm.  Finally, there is a test button with ready indicators. One of the nice things about the ready indicator lights is that there are two states: when the light turns green, the flash is ready to fire but is not fully charged. The indicator turns red when fully charged.

The 430EZ has good power conrol. It packs a good punch with a guide number in the range of 140ft (ISO 100). That power is then adjustable down to a 1/32, which is a full stop less than the SB-24, for example. Additionally, the control are quick and easy to use, which is a joy in the field.

Unfortunately, there’s a big one. After about a minute and a half, the flash goes into a battery-saving standby mode. This might not seem like such a big deal at first. When the flash is on-camera, the first attempt to take a photo wakes it up. However, when it’s off camera, a test-flash may NOT wake it up. Since this flash doesn’t have a PC sync jack (a second but less important drawback), I’ve used it with a “Cactus” style PT-04 receiver which has a hot shoe. Once the strobe has slipped into its sleep mode, no amount of triggering will wake it up; I have to physically walk over to the unit and press the test/indicator button to get it going again. This is so inconvenient as to render the flash almost useless for off-camera work.

The verdict here is tricky. I can recommend this flash IF AND ONLY IF you have a triggering system that will wake it from its standby mode. I have not tested it with any triggering system that does wake it up, and I don’t know if any exist. It may be that some of the more recent pocket wizards will do the trick, or perhaps one of the other brands that makes use of a hot shoe. If you can’t be sure that you can wake it from its hibernate mode, however, I would recommend looking elsewhere… this flash will only frustrate you.