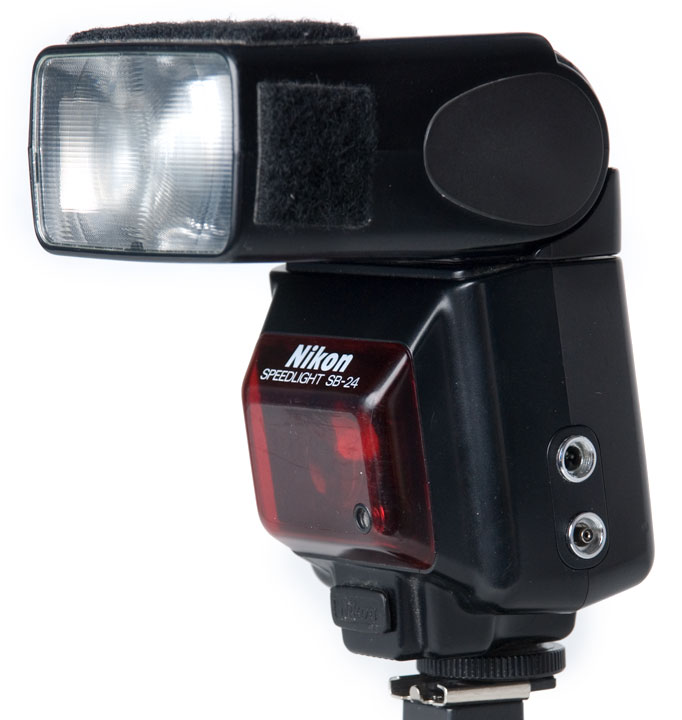 A model from the early 1990s (and perhaps earlier), the SB-24 is what you’d expect from a Nikon flash from that era. It was intended to be a professional quality unit, and it does feel nice and solid, even after nearly 20 years.

A quick look at the rear panel reveals the strobe’s features.  From the top left, the first switch controls whether the flash syncs to the front or rear curtain (when used on camera). The next switch is the shooting mode selector: A gives auto exposure according to the speedlight’s meter, M allows for manual power adjustment, the third position is an icon that indicates multiple-flash mode, and finally, there is TTL mode, in which the camera’s meter adjusts the exposure according to the through-the-lens meter.

The “Zoom” button holds no surprises, and allows you to zoom the lens from 24 to 85mm (24, 28, 25, 50, 70, 85). Next to the zoom button is the M button, which changes the power level of the flash in manual mode. The SEL button and two arrow buttons work in conjunction to select and change different values (ISO, aperture, etc) within the LCD view screen.

The bottom row of controls holds a light button (light bulb icon), which turns on a smooth, blue-green backlight on the LCD. The next button is a strobe release/ready indicator which turns red when the flash is fully charged. Finally, there is a power switch, which includes Standby mode between the typical ON and OFF positions.

The SB-24 fills all of the basic strobist requirements. It is capable of full manual control, with power levels ranging from 1/1 down to 1/16th. Of course, it has a hot shoe if you’re using a Cactus-type trigger, but more importantly, it has a PC jack on the left  side. The PC jack makes it simple to connect a Pocket Wizard or one of the RD-616 style Ebay triggers.

There aren’t any significant drawbacks to this unit, but a couple of minor issues are worth mentioning. As I mentioned previously, the power level only goes down to 1/16, wich isn’t great for close up work.  Additionally, there is only one button that controls the manual power level, and it only adjusts down (before returning to the top). So, if you’re on 1/4 power and want to move up to 1/2 power, you’ll have to scroll through 1/8, 1/16, and 1/1.

An excellent choise for the strobist as long as long as you don’t primarily shoot close up with shallow depth of field.