Recently, I published a quick comparison of the new Nikon D7000 and the equally new Canon 60D, both similarly priced mid-range cameras from their respective manufacturers. The Nikon fared very well against the Canon 60D. However, in several recent reports, I’ve begun to see the D7000 compared to the Canon 7D instead… and the 7D is a much harder act to follow. Some have claimed that the Nikon is just as good as the 7D at $400 less.

It is easy to get caught up in the hype surrounding a new camera, especially when it hasn’t even been released to the public. But lets take a more sober look at the features and build of the two powerhouses and see if they can really be considered equals.

First, lets take a quick look at the bodies. Although the Nikon D7000 is advertised as having a magnesium alloy body (and it does), it is more of a skeleton than the full metal body of the Canon 7D. As you can see in the photo (sorry for the hasty composite), the 7D is metal all the way up to the lens mount, where the stress from heavy glass can make the greatest impact. The D7000, on the other hand, has magnesium armor in many crucial areas of the body, especially along the top and back of the camera, but its front (and importantly, surrounding the lens mount) is still primarily plastic. The D7000’s body, then, is a great step up for the advanced amateur, but it is still not quite professional class construction. No doubt the smaller size of the D7000 played an important part in the body design.

Though both cameras offer a bright penta-prism viewfinder that show 100% of the full frame, the Canon shows the image at full magnification, while the D7000 is 5% smaller. For those of you who spend hours each day staring through your viewfinder, you’ll understand why this makes a significant difference… bigger, brighter viewfinders are always better.

Now, some of the features:

Obviously, the Canon 7D has a higher resolution sensor, at 18 megapixels compared to the D7000’s 16. The Nikon’s sensor can be pushed (H2) all the way to ISO 25600, though having seen the results, it’s hard to imagine that anyone would want to. Otherwise, the cameras have the same ISO range, 100-6400. I’ve found that images from the 7D shot up to ISO 1600 (and sometimes 3200) are quite usable. I look forward to seeing how the D7000‘s high ISO images compare. As it is a newer sensor and lower resolution, we should expect the D7000 to have slightly better high-ISO performance than the Canon 7D… and my initial tests seem to indicate that this is true, especially at ISO 6400.

[Update: After numerous early reports of hot-pixels on the D7000, Nikon has released a firmware update to help correct the issue. They say that it may not correct the problem entirely, but it should make them much less problematic. You can upgrade your firmware here: Nikon D7000 firmware update .]

The D7000 does have an interesting new 39 point, RGB inclusive AF system. However, it still only has 9 cross-type AF sensors, which make a crucial difference in low light, low contrast situations. The Canon 7D has more than double that number of cross-type points (19 dual cross-type, in fact), and an AF system borrowed from the Canon EOS 1D line, probably the world’s most popular and successful line of sports photography cameras, driven by dual Digic-4 processors. Though it’s likely that the Nikon will perform almost as well as the 7D in good light, I would put my money on the 7D in lower, flatter lighting situations.

[Update: This point was a little quick, and since there have been a couple of questions, I’m going to explain this conclusion in a little more depth.

As you undoubtedly know, contrast is the fundamental ingredient for auto focus in SLRs.

Stop and think for a few moments about what a color RGB image is, or better yet, open a few images in Photoshop and take a look at the “Channels” palette. An RGB image is composed of 3 black and white channels, one corresponding to each primary. As you may know, you can duplicate your red channel and replace your blue channel with it, for example… there is nothing inherently “red” or “blue” about each one. Instead, each one is like a black and white photo shot with a colored filter, so they have differing levels of contrast. Since CMOS and CCD sensors use about twice as many green receptors as any other (because of the way that our eyes see) the green channel usually has the most detail information, but the lowest contrast. Again, those of you who do a lot of isolating and masking in Photoshop know that green is the channel least likely to be used to create a new mask.

The 7D does use the color data to assist in AF; it uses the high contrast Red and Blue channels (its metering sensor uses two layers, an RG and a BG). The Nikon uses all three channels, ie, the full RGB spectrum, but keep in mind that because the green channel is typically low contrast, it’s not usually going to be any more useful than the composite RGB brightness data that our cameras have always used; I take the fact that it claims to be RGB as more of a gimmick than an actual engineering feat. So, on the basis of color data, there will be (extremely) few circumstances in practical use when the added color channel will be helpful in pulling focus… if any.

On the other hand, the Canon 7D uses 19 cross-type sensors (rather than just horizontal). Nikon clearly understands the importance of cross-types; they gave the D300s 15 of them in its 51 point array. I’ve been shooting with this camera exclusively for the past two months, and the AF is wonderful. So why not give them to the D7000? The obvious reason is that they’re expensive, and that the D7000′s AF system is intended to be slightly scaled down (fewer AF points, fewer cross type sensors) from the much more expensive D300s (RGB aside). So, there is no reason to think that the D7000′s RGB system will produce better results than Canon’s color assisted AF, but there is a very serious reason to believe that the 7D’s 19 cross-type sensors will out-perform the D7000′s 9. ] 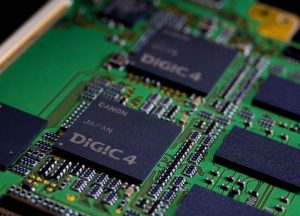 The dual processors of the Canon 7D also mean that it should perform faster in general. It can shoot faster bursts of photos (8 per second vs. the 6 of the Nikon D7000). The D7000 does allow bursts for a slightly longer duration (100 vs. 94 jpgs), which makes sense: since it’s taking fewer photos per second, it doesn’t have to write the data as fast, and the buffer will have more time to clear. Nikon, however, is suspiciously vague about the resolution and format of those photos. In this matter, I’m keeping in mind that the Nikon D300s advertises being able to shoot 8 frames per second, but it can only shoot 2.5 in RAW mode (unlike the 7D, which shoots 8 fps in RAW or jpg).

The 7D can also process video faster, allowing it to shoot 60 frame-per-second slow-motion HD video (at 720p). Perhaps more importantly, the D7000 can only shoot 1080p video at 24 fps (not 25 or 30), which is a major limitation. Although some film makers prefer working with 24 fps because of its similarity to the movie film frame rate, 30 fps (30p/60i) is the standard broadcast frame rate, and common video editing frame rate. If you intend to edit video footage together from the D7000 with camcorder video, you’ll have your work cut out for you.

One advantage of the Nikon D7000, however, is the sensitivity of its focusing sensors. According to the specs, the Nikon can focus in a half (0.5) EV lower light than the Canon, which can always come in handy. This is, of course, assuming that in the available light there is sufficient contrast, etc, for the sensors to pull focus. The D7000 also uses SD cards, which some may find to be an advantage, and it holds two of them, allowing physical separation of jpgs and RAW files. I think this is a really cool idea, but I’m not really sure how useful it will be in practice… I can’t think of a good practical application for the way I work.

There are, of course, countless other differences between the two cameras… but many of them are hard to quantify, and many of them are not used by many photographers. I’m willing to accept that there may be particular features found in the D7000 that will make it the best choice for a particular photographer, but when it comes down it to the raw figures, the Canon 7D appears to be the clear winner. Perhaps not by a ton, but certainly $300 worth.